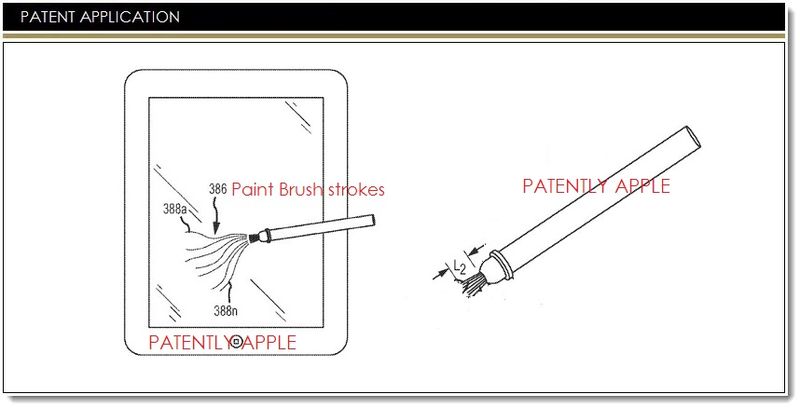 While the late Steve Jobs wasn't a big fan of the "dumb stylus" of yesteryear, that was basically a tiny plastic pencil, he knew that one day the technology would give rise to an advanced iPen. Apple has invested heavily in the modern iPen with over 24 patents to their credit thus far. Today we get to take a look at Apple's fourth and fifth stylus related patents for the first quarter of 2014 alone. In Apple's latest inventions, they describe a sophisticated stylus with an internal mechanism using electrically charged discs that could elongate the tip of the stylus. In standard mode it's a pen. In the extended mode it's a brush with brush-like fibers. Apple's invention will really be appreciated by artists as they've created a very unique feature just for them in respect to color matching. The different modes of operation are designed to provide a more realistic writing and painting experience. In recent weeks, Microsoft has filed for a similar invention using magnets to control the writing and painting experience. This is where the trend is headed. With Apple having invested thousands of man hours on a next generation stylus or digital pen, let's hope that one day soon Apple's CEO Tim Cook will finally give this project the green light to deliver a high-end iDevice accessory for artists and business people alike.

Touch sensor panels can be formed from a matrix of row and column traces, with sensors or touch regions present where the rows and columns cross over each other while being separated by a dielectric material. Each row can be driven by a stimulation signal, and touch locations can be identified through changes in the stimulation signal. Typically, a touch location is sensed based on an interference of the stimulation signal, such that a touch location may correspond to a location where the stimulation signal is the weakest. In some instances it may be desirable for a user to provide input to the touch screen with an input device other than the user's finger or fingers. Some input devices, such as a stylus, allow a user to use the input device as a pen or pencil and "write" on the touch screen. However, many times, a tip or point of these input devices may be a relatively hard element that may feel unnatural to users, as well as may generally produce the same output on the touch screen regardless of the user's input variation (such as, pressing harder, angling the tip, and so on). Accordingly, many of the "writing" input devices may lack features that may be present in pens, pencils, or other non-electronic writing tools.

Apple Continues their Work on a Digital Pen

As one example, the user may activate a button, switch, or other component, in order to vary the length of the nib which may be exposed through an end of the stylus. 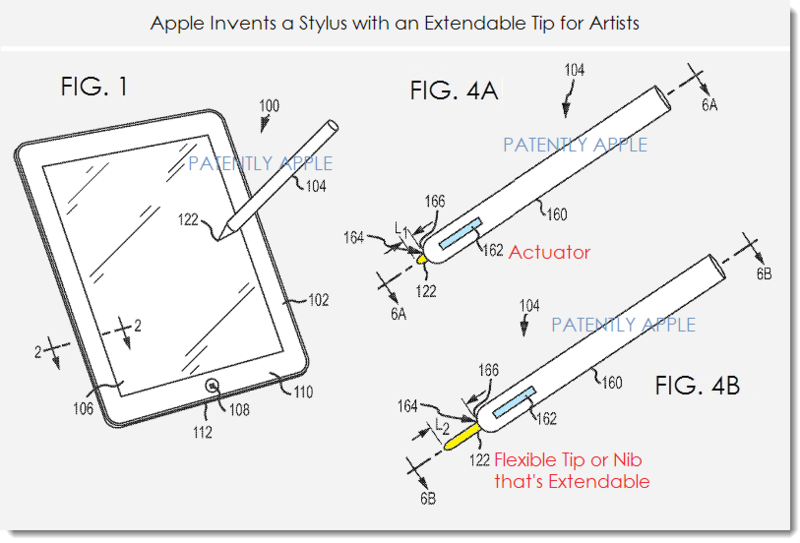 The Pen Communicates with the Touch Display

Apple notes that by increasing its exposed length or other dimension, more of the nib, which may be a conductive element, may be in communication with the touch screen. In these instances, the stylus may interact with multiple nodes of the touch screen which may produce a wider, darker, or differently colored output, provide an output with different formatting, be registered as a different input, or otherwise vary the output of the touch screen based on the inputs from the stylus.

As one example, the more portions of the nib that may be in contact with the touch screen may provide a wider displayed output line, or may correspond to different colors, or the like. 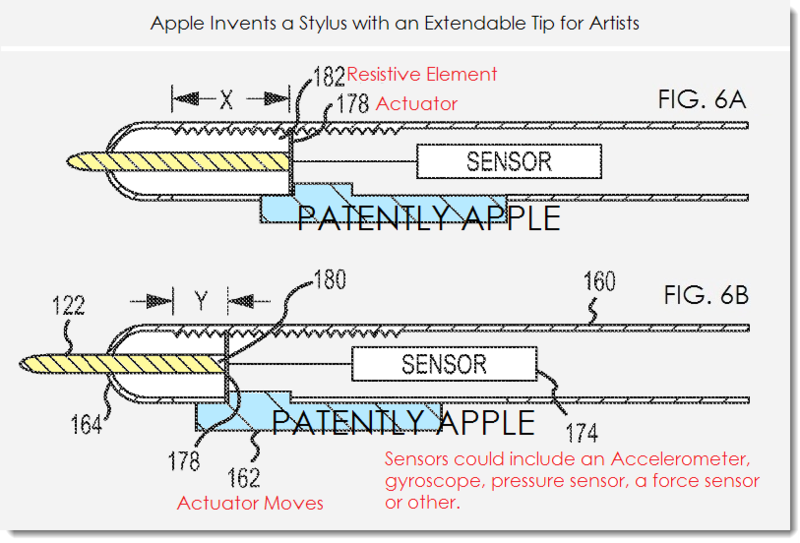 With reference to FIGS. 6A and 6B, the sensor may be in communication with a voltage divider, such as a potentiometer. In this example, as the actuator changes a position of the nib with respect to the body of the stylus, the wiper #178 operably connects to an end of the nib which may change location along a restive element. For example, as the actuator moves the nib along a length of the body of the stylus, the actuator may also move the wiper.

In another embodiment, the nib may include multiple (e.g., two or more) strands. In these instances, as the nib length extends from an enclosure or body of the stylus, the strands may separate from one another. As one example, the strands may fan away from one another. Each strand may interact with the touch screen to provide a separate input to the device, and so this may create a brush- like input to the touch screen.

As the strands may be relatively flexible, the stylus may feel substantially similar to a paint brush, and the touch screen or computing device may be configured to provide outputs that correspond to a paint brush-type input. For example, as the user swipes the stylus across the page, the interactions of each strand with the touch screen may produce a brush-like output line having varying thicknesses depending on the pressure applied by the user, the angle of the stylus, and so on. 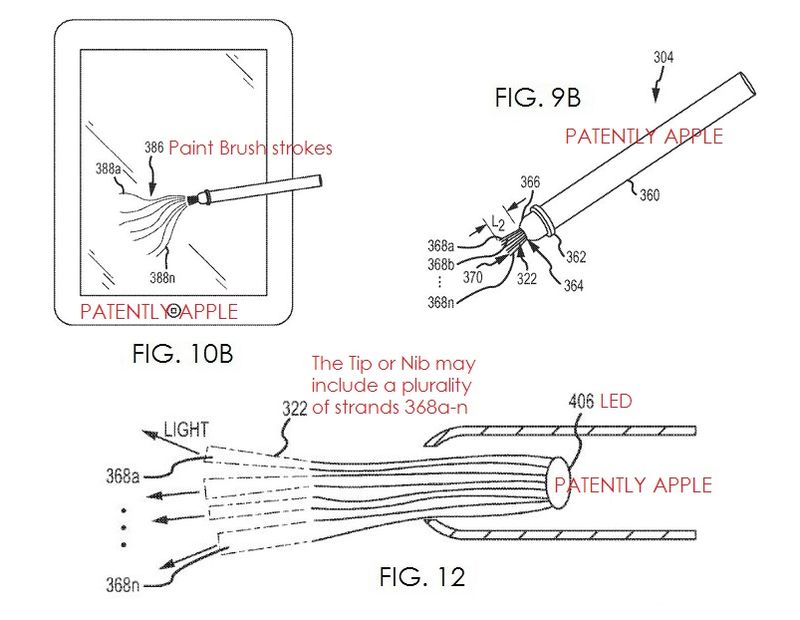 Further, a stylus having this functionality may facilitate color matching of real-world items, so that those colors may be used in an output associated with the stylus.

As one example, the ends of a strand may be placed next to a shirt. The color of the shirt may be sensed by the light sensor and a corresponding RGB value may be determined. That RGB value may be communicated from the input device to the associated computing device, so that outputs created by the action of the input device are shown in the aforementioned color. Essentially, any color may thus be sampled and reproduced as an output color in this fashion, and substantially any item may serve as the basis for this color sampling.

In Apple's second stylus related patent we see patent FIG. 9D below. In this patent figure, Apple notes that the inner shaft may be similar to those described above, but may additionally include a plurality of disks #184 that are electrically conductive.