Today, the US Patent and Trademark Office published Samsung's trademark application 86187898 for Flybell. The application which is noted as being originally filed on February seventh, is noted as representing a "wireless beacon and corresponding software." This will likely be competing with Apple's iBeacon. Report Updated Feb. 22, 8:45 EST 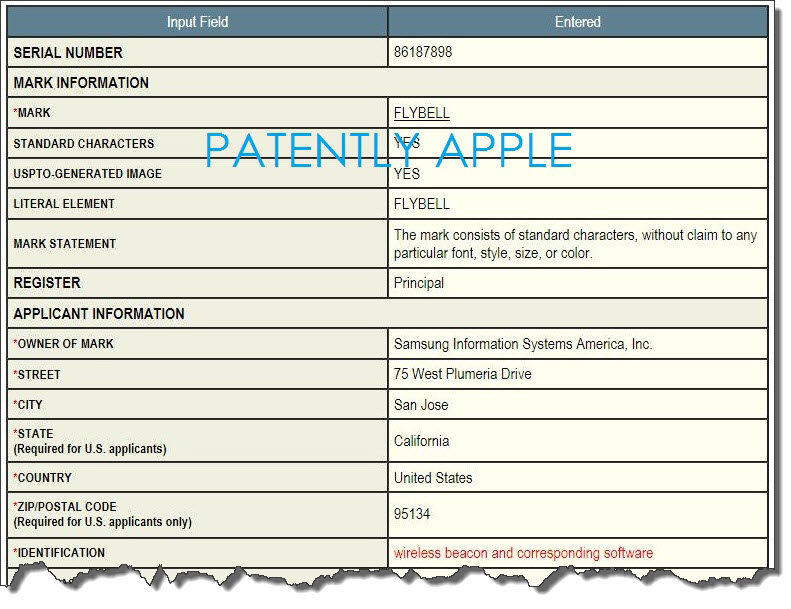 The likelihood of this feature being introduced with the launch of the Samsung Galaxy S5 next Monday at the Mobile World Congress event in Barcelona is very high, though not a guarantee. However, there's a history of Samsung filing for last minute trademarks just before a big event to hype up a product. We'll only have to wait till Monday to find out how this will play out.

And lastly, a new report today claims that Samsung will be privately promoting their bendable tablet to VIP's behind the scenes in Barcelona as they did at CES earlier this year. The bendable tablet is to launch as early as Q4 2015 - though that's likely wishful thinking.

Samsung's latest promo video for the Galaxy S5 is noted below, though it really doesn't reveal that much. Supposedly, the S5 will be introducing a waterproof feature.

Update Feb. 22, 2014: Some think that Flybell is to replace NFC. This is highly unlikely. The new wireless beacon will be in addition to NFC. In a report published yesterday, Visa will enable secure, cloud-based mobile payments that will utilize NFC in Android devices. Visa will be presenting more about this new service during the Mobile World Congress Trade Show in Barcelona this coming Monday.