Samsung May Launch a New Streaming Music Service Next Week

According to a December 2013 CNET report, more than half of Samsung's 62,000 engineers are now working on software. Samsung's co-CEO Boo-keun Yoon stated that "Software is something that we're working on continuously. These days, hardware is important, but that is not enough." That's because Samsung's future will rest upon how well its products work together, which is all about the software. With the World Mobile Congress trade show kicking off on Monday, Samsung's timing of three trademark applications in the US tells us about one of the software services that they're likely to introduce: Milkmusic.com.

Samsung has filed for three trademarks with the US Patent and Trademark Office. 1) Milkmusic.com, 2) Milk Music, and 3) Samsung Milk Music as noted below in the graphic snippets of the filings. 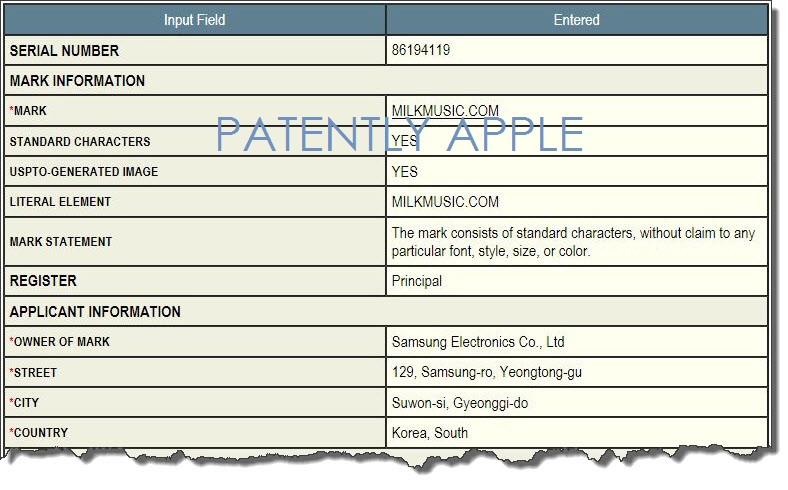 Samsung filed all three of their trademarks under the same international classes as follows:

While Samsung became the top phone-seller thanks to its "all-in" strategy for Google Android software, it is eager to create a new "mobile ecosystem" as the Korean technology heavyweight hopes to become a market creator not just a fast follower.

The move concerns Google because Samsung is the biggest user of the Android system and rightfully so as CNET reports today that Samsung will debut Gear 2 smartwatch with Tizen, not Android.

Earlier this month, the Korea Herald reported that Samsung and Google were at odds over the Galaxy S5 smartphone that is likely to debut next week.

According to the report, "Samsung Electronics vice chairman Lee Jay-yong is frantically seeking support from its global partners before unveiling his firm's Galaxy S5 smartphone at the Mobile World Congress in Barcelona this month.

The vice chairman and Larry Page, CEO of Google, met late last month to discuss their relationship, but both firms expressed discomfort with each other's position, according to The Information, a tech news publication.

This was mainly due to Google's move to restrict its partner from tailoring its Android operating system for smartphones. Market watchers speculated that Samsung had sought Google's approval for the tweaks made to Android for its upcoming Galaxy S5.

The design of the OS installed on Samsung's next flagship smartphone is likely to be drastically altered, as the OS failed to meet expectations on the Galaxy S4.

Google has reportedly discouraged its partners, including Samsung, from developing mobile applications that could compete with Google's apps. Yet it would appear that Google's advice may have fallen on deaf ears with Samsung looking to introducing a new streaming music service that may offer addtional features. In fact, it may be the first step in challenging Google Play over time.

It's hard to determine at this point in time if the three US trademark filings were timed perfectly prior to the World Mobile Congress trade show in Barcelona so as to ramp up excitement for the new service or if the new service is just something earmarked for some time in the future.

Apple introduced the iPhone 5S last September with both fingerprint authentication and iTunes Radio. Samsung's Galaxy S5 is likely to introduce the same two features next week. So although Samsung says that they want to be creators and not just fast followers, as the Korea Herald noted, their actions continue to tell us a different story.