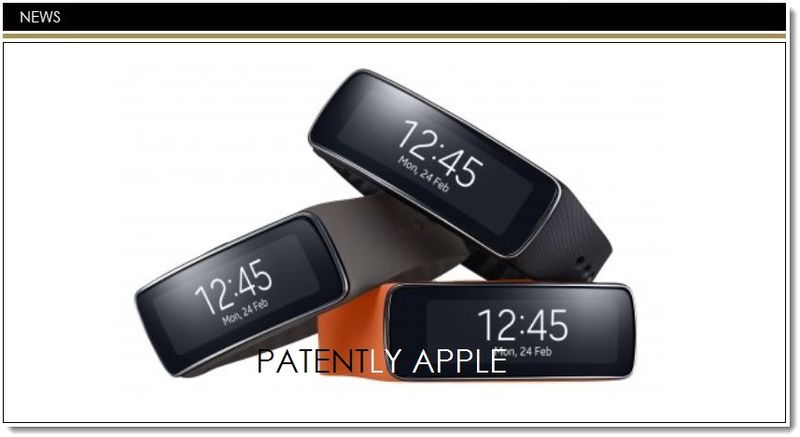 At today's Samsung Unpacked Event held in Barcelona Spain, Samsung unveiled only a couple of things worth noting. Firstly, they introduced the all-new Gear Fit device which is a slimmer wearable device for the wrist that's geared for workouts as noted in our cover graphic above. The new Gear Fit design brings Samsung one step closer to delivering their futuristic patent pending design to life that will really turn heads. Secondly, Samsung finally delivered a swipe-style fingerprint scanner to their Galaxy smartphone that will address the mobile payment market. Humorously, Samsung's opening video talked up the new technology features that they were about to introduce, such as a better camera and fitness market features. But then they actually made it point of saying that fashion wasn't really important. It was blatantly a defensive statement against Apple's cool iPhone 5S. It was odd because later in their keynote they noted that "Glamour" was the number one thing that consumers wanted. How confusing can you get? And finally, Samsung's flamboyant co-CEO JK Shin, head of Samsung Electronics' mobile division made a really strange sales point. According to Shin (@ the 49:05 mark of Samsung keynote), "Our consumers do not want eye-popping technology or the most complex technology." No, they just want simple stuff, according to Shin. It's funny that when they can't match Apple's advanced Touch ID feature that's intelligently built right into the Home Button, it automatically becomes eye-popping technology that consumers don't care about. Ha! – Mr. Shin truly missed his calling in life as a standup comedian. 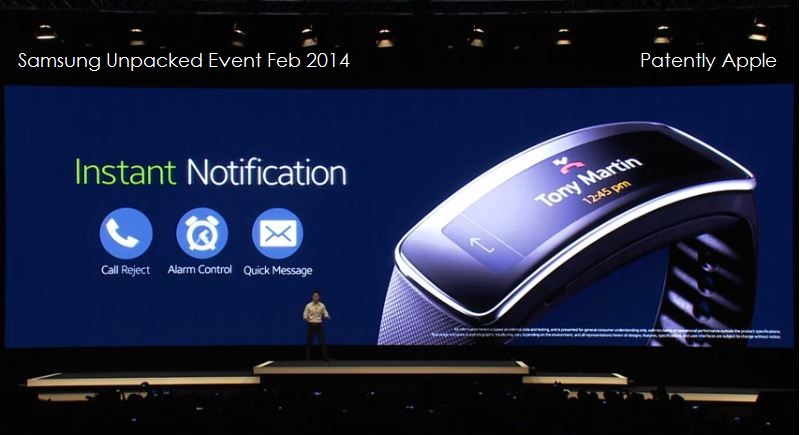 During Samsung's Unpacked Event 2014 in Barcelona Spain today held at noon EST, they introduced a new wearables device called the "Samsung Gear Fit." According to Samsung, "it's the industry's first curved, Super AMOLED wearable device for the active consumer. The Gear Fit offers the unmatched convenience of Samsung Gear technology with the most comprehensive fitness tools available, empowering consumers stay physically active without sacrificing personal style or mobile connectivity." As noted in the graphic above, the Gear Fit offers the user the ability to Reject Calls when working out, control alarms and offer quick messaging. 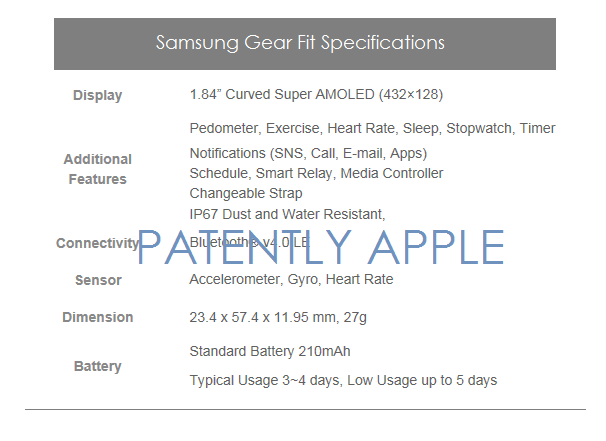 It provides much more than an everyday fitness band, keeping consumers up to date instant notifications from Galaxy smartphones such as incoming calls, emails, SMS, alarm, S-planner, 3rd party apps while consumers are on the move so they can stay connected. Changeable straps in Black, Orange and Mocha Grey will let users express their individual style, changing the look of the Gear Fit to match their outfit or mood for any type of activity."

Gear 2 and Gear Fit have a built-in Heart rate sensor so that your body knows how it's reacting to a workout. 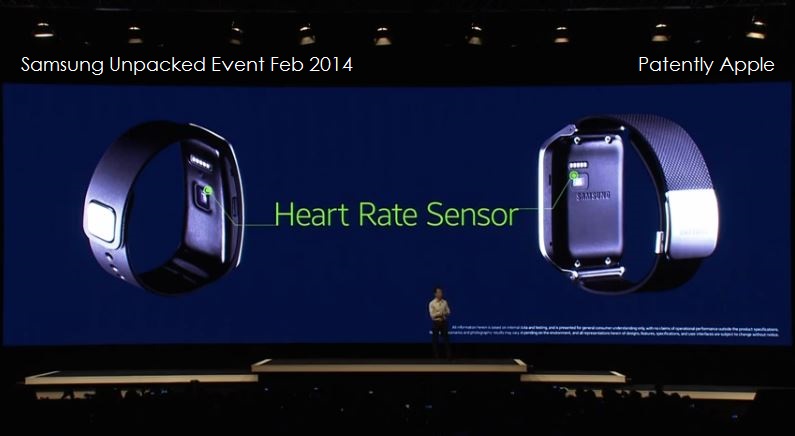 Samsung's Gear 2 and Gear Fit comes with an App called Fitness Manager that could run on a Galaxy Phone or tablet to help Gear device owners with keeping stats of their workout. 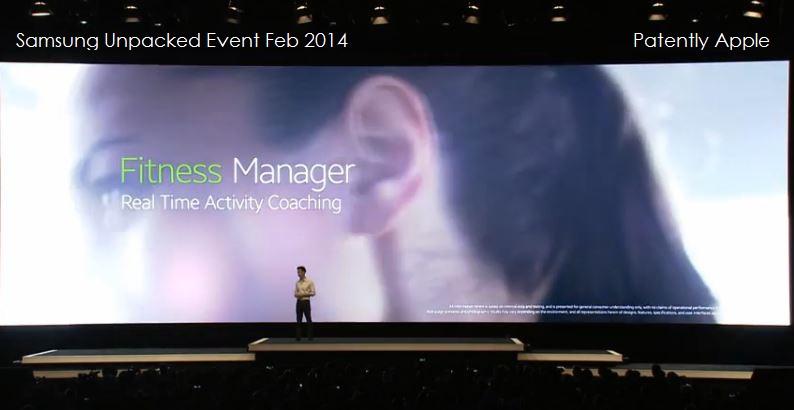 Samsung presented on stage that users will be able to scroll through notifications and mail on the Gear Fit's display from left to right.

As we've been talking for some time now, Samsung and LG have been racing to deliver a fingerprint scanner to market after Apple introduced the iPhone 5S Touch ID feature for device authentication and e-commerce with iTunes.

Today Samsung introduced their fingerprint scanner for device authentication and e-commerce that will work with Apps like PayPal. The design of Samsung's fingerprint scanner was actually covered in a report that we posted on February thirteenth. Whether Samsung is using the CrucialTec design or has custom designed a similar solution of their own can't be confirmed at this time. It's a a Home Button styled solution from CrucialTec. See CNET's video showing that feature at the 56 second mark.

While they delivered on a fingerprint scanner, they failed to deliver a 64 bit architecture as they claimed they would. Perhaps that just more of what Shin referred to as being complicated stuff that consumers don't really want. Humorously they introduced their finger scanner as if it was an industry first while they echoed Apple's sales pitch. Imagine this, your fingerprint is encrypted and will never be shared. Geez, that's so original. I wonder where we've heard that one before – ha! 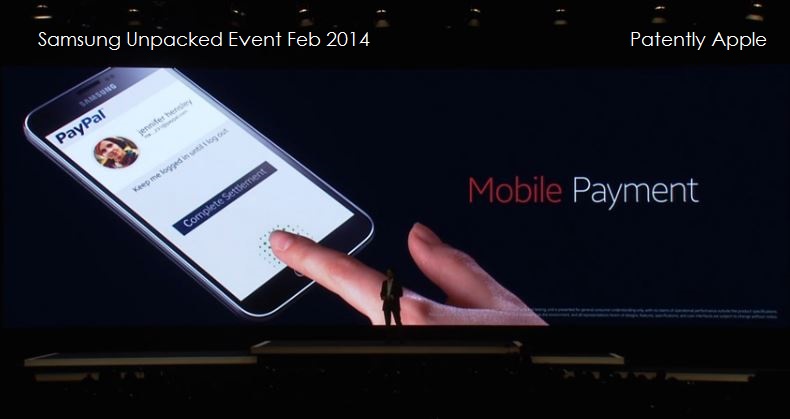 Samsung Galaxy S5 users will also be able to use the fingerprint scanner to unlock specific apps or features by using "Private Mode" for pictures or other data.

There were a few other minor advancements to their camera and if you want to know about that, you could always check out Samsung's Unpacked Event video here. 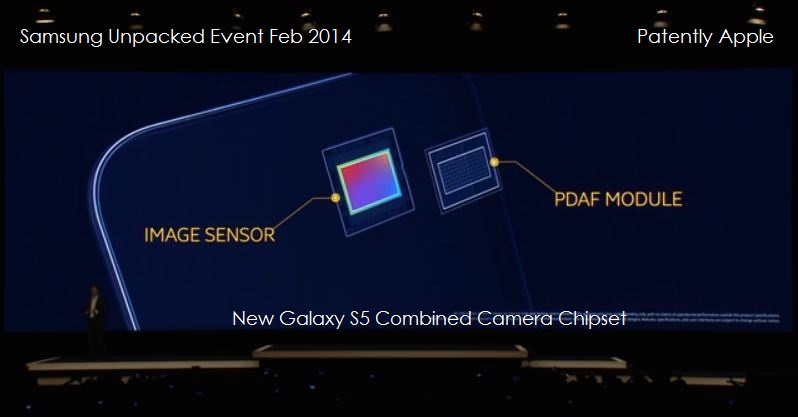 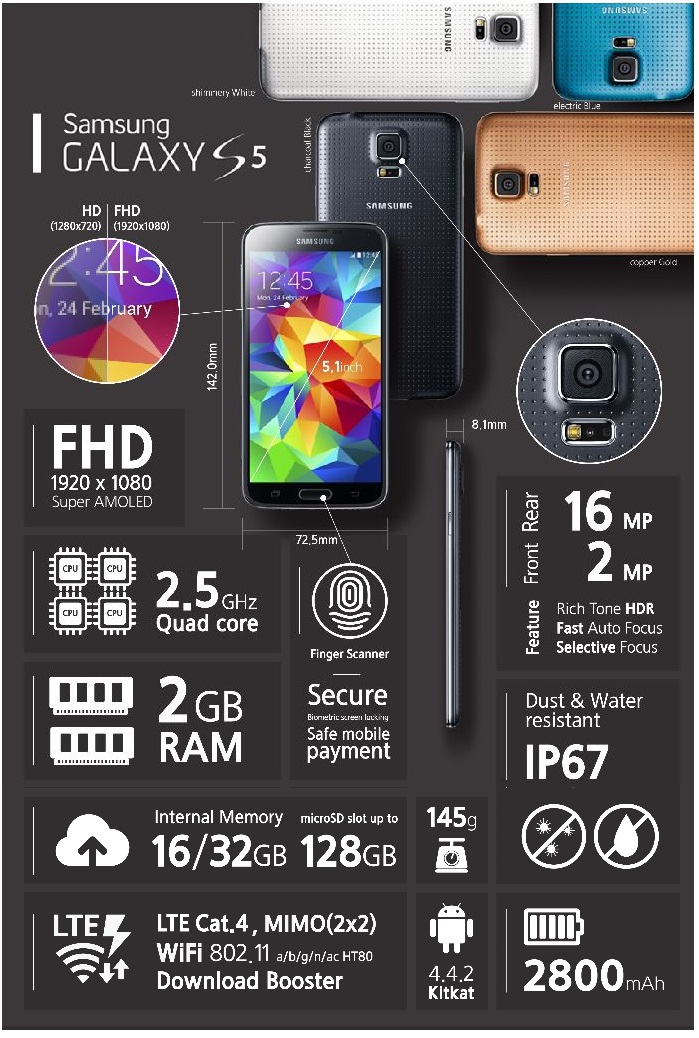