Quantum Dots Could Take the Retina Display to the Next Level

Apple's Retina Display is a brand name used by Apple for liquid crystal displays that have a pixel density high enough that the human eye is unable to discern individual pixels at a typical viewing distance. Apple created a special video to explain the breakthrough behind the Retina Display. Today, the US Patent & Trademark Office published a series of four patent applications from Apple that reveal their work on advancing the Retina Display through the use of Quantum Dots that will eventually sharpen colors to yet the next degree of outstanding quality.

The backlight often contains light emitting diodes that are coated with a phosphor, such as Yttrium Aluminum Garnet (YAG), in order to produce a white light, which the liquid crystal layer then uses to render desired colors for the display. In other backlight devices, the phosphor can be replaced with quantum dots that are configured to emit light at various wavelengths.

One of Apple's solutions to this problem is laid out in today's patent application 20140035960 titled Backlight Dimming Control for a Display Utilizing Quantum Dots: "The backlight can include an LED (e.g., a blue LED) configured to emit a light through a sheet of quantum dots. The quantum dots can be configured to emit colored light (e.g., red and green light) in response to the light emitted from the LED. To control the relative luminance of the LED, the backlight can be controlled through the use of current dimming to adjust the brightness of the LED at high relative luminance settings to increase the light output efficiency and can include the use of pulse width modulation to adjust the brightness of the LED at low relative luminance settings to reduce the amount of wavelength shift experienced by the LED. Review Apple's invention for more details.

A related Apple solution covers the use of optical coatings to eliminate light emitting diode (LED) hotspots, and more particularly, to the placement of an optical coating near an LED or a quantum dot sheet to normalize the intensity of light emanating from a backlight. For more on that review Apple's invention titled "Coatings to Eliminate LED Hot Spots."

Another metric that can be used to judge the quality of a display is the color gamut produced by the backlight. Color gamut refers to the color space that can be displayed, and the ability to precisely define the colors can then allow for a larger color gamut by either using individual colors or a combination of several colors.

However, one of the problems with replacing the YAG phosphor layer with a QD sheet is that light that has not excited a quantum dot may not be isotropic, and the three different colors (red, green, and blue) may not be uniformly mixed. Diffuser(s), prism sheets and changes in the design of the components such as the light guide path can alleviate this issue by properly mixing the colors together in order to achieve a uniform distribution of colors in the display. Apple's solution to this problem is laid out in today's patent application 20140036203 titled Light Mixture for a Display Utilizing Quantum Dots.

The liquid crystal layer can be replaced by a MEMS shutter control layer, which does not require polarized light to control the brightness of color. By replacing the liquid crystal layer with a MEMS shutter control layer, quantum dots can be placed outside of the backlight architecture. This can allow the backlight to maintain a simpler architecture, while at the same time utilizing quantum dots to produce a display with a superior color gamut. 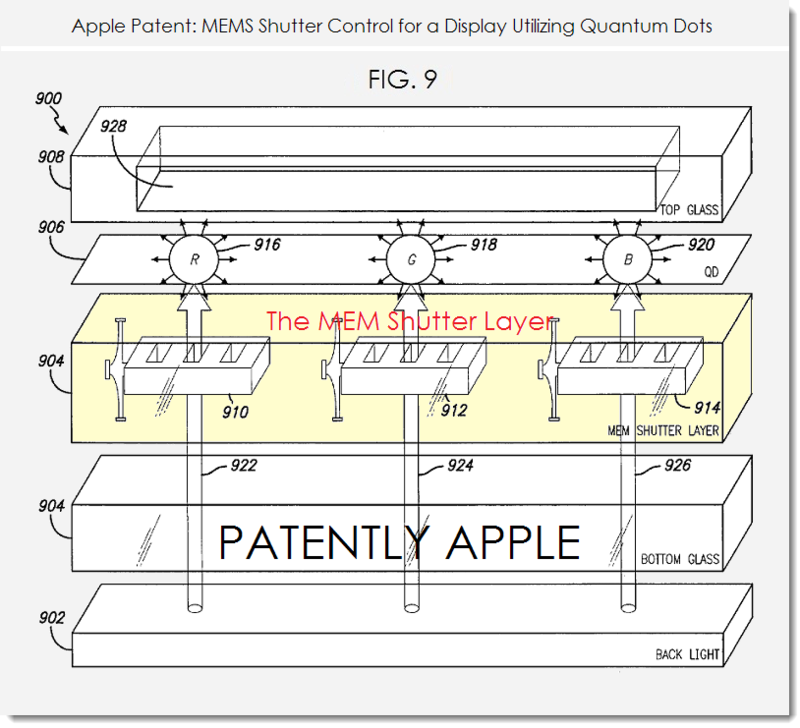 Apple's patent FIG. 9 illustrates a close up exploded view of a display stack up with a MEMS shutter and quantum dots sheet.

Motorola Invents a Spacebar with an Integrated Mini Trackpad