Some rumors are really out there. Like you, I shake my head at some of the craziest tech rumors that surface every week. A lot of them are about what Apple's future iPhone 6 will be offering this fall, but not all. One of my favorites this week was the "iAnywhere" daydream that J.P. Morgan analysts sent out in a note to clients: "With replacement cycles elongating and competitive pressures likely increasing, we think iAnywhere could provide Apple a leapfrog event ahead of the competition." While I'm still shaking my head on that one, another doozie came out of the woodwork yesterday. What was interesting about this one was the depth of its conviction. IC Insights gave the public a peek at their theory that Apple and Intel could possibly work together on a future 10 nm iDevice processor; One that they claim would give Apple a chance to leap well ahead of Samsung and TSMC capabilities and deliver powerful products. The news bulletin put out by IC Insights was only the tip of the iceberg, as it's a part of a 900 page in-depth report. Our report covers IC Insights full bulletin.

IC Insights, Inc. is a leading semiconductor market research company headquartered in Scottsdale, Arizona, USA. They're certainly not lightweights when it comes to providing the industry with forward thinking ideas about the future of the semiconductor industry. IC Insight's latest Bulletin reads as follows:

"Intel, the world's largest semiconductor company, has come under attack and is backed into a corner. With shipments of desktop and notebook computers in the doldrums since 2010, Intel's PC processor business has been in decline. Meanwhile, AMD and others are taking aim at the Intel-dominated server business with ARM-based MPUs. At the same time, Intel has struggled to gain access to the fast-growing market for application processors used in tablet PCs and smartphones.

In 2013, Intel registered its third consecutive year of poor sales growth. In fact, the company logged a 2% decline in IC sales, eight points worse than the 6% growth rate displayed by the worldwide IC market. Moreover, its outlook for 2014 was for more of the same—relatively flat revenue growth in an IC market that IC Insights expects will increase 7%.

Faced with mounting pressure to turn things around, IC Insights believes that Intel must strike back and embark on extraordinary strategic moves in order to regain lost momentum. One such measure that Intel recently enacted was to buy its way into the tablet PC processor market. In an attempt to win more designs, the company announced in November 2013 that it would pay the price difference between its newest Atom-based x86 processor ("Bay Trail") and an ARM processor if a tablet manufacturer used Intel's system-on-chip MPUs in its product. In addition, Intel said it would pay the design or redesign cost that a tablet maker would encounter to build its new 22nm Atom SoC processor into the system. Intel believes this "buy-in" program could cost them 1.5 percentage points of gross margin in 2014, which would amount to an estimated $500 million! Clearly this is a radical (some might say desperate) move, but Intel is one of the few IC manufacturers with the resources to initiate such drastic action.

Now consider Intel's plentiful wafer fab capacity and industry-leading process technology. Last month, Intel announced it would indefinitely postpone equipping its Fab 42 in Chandler, Arizona. This facility is currently a shell and was intended to have a built-out capacity of 40,000 300mm wafers per month. The company has stated that it expects the facility to be used for manufacturing at the 10nm process node after first ramping and running 14nm production.

Does it make sense for Intel to let Fab 42 sit idle as an empty shell or will Intel consider another radical move and put the fab to use manufacturing ICs for another, possibly competing, company?

It is no secret that Apple is looking to move some, if not eventually all, of its application processor production out of Samsung, its primary competitor in the smartphone and tablet PC markets. As shown in Figure 1, IC Insights estimates that Samsung produced about $3.4 billion worth of processors for Apple on a foundry basis in 2013. 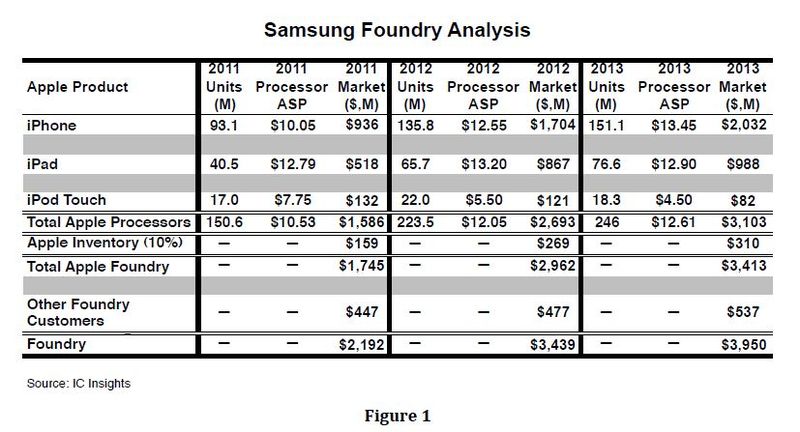 While TSMC and GlobalFoundries are expected to receive a portion of the Apple business at the 14nm process node, IC Insights believes that Intel finds itself in an enviable position of being able to secure a large portion of Apple's application processor business at the 10nm node using Fab 42. In fact, since TSMC made it known that it was not interested in dedicating an entire fab to an individual company, Intel could score a big foundry production win by dedicating a large portion of Fab 42 entirely to Apple.

If Apple did agree to have Intel make its application processors at the 10nm node in Fab 42, it would gain access to the most leading edge processing technology in the world. IC Insights believes that Intel is approximately one year ahead of both Samsung and TSMC in IC process technology (Figure 2), an advantage that Apple could parlay into a significant performance advantage in both the tablet PC and smartphone markets. 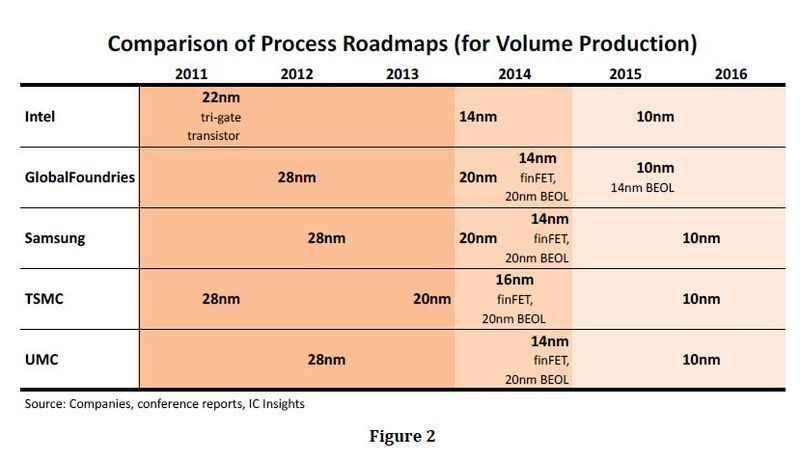 Apple is currently a major customer of Intel's. Intel makes its x86 Core MPUs for Apple desktop and notebook computers. The two companies have partnered in the PC MPU business for some time and have reasonable familiarity working with each other. Building Apple's custom ARM-based MPUs used in iPad tablets and iPhones could present some competitive challenges, but that may not stop the companies from examining the possibility of working together in this market.

Intel could supply Apple with flash memory. Intel and Micron jointly operate the IM Flash fab in Lehi, Utah. Intel has a 49% stake in that fab, which has a maximum capacity of 75,000 300mm wafers per month. Intel could negotiate to include flash memory in any application processor deal it might strike with Apple, much like the arrangement Apple has with Samsung.

A nice PR benefit for Apple. If Apple uses Intel's Fab 42 for production of processors, Apple would gain recognition as having its processors manufactured by a U.S. company on U.S. soil using process technology that is 6-12 months ahead of anything else used in the industry.

An Intel/Apple deal as described above would have been almost unthinkable three years ago. However, given that Intel is currently backed into a corner with an empty leading-edge fab shell and flat/declining sales, such an arrangement today appears to offer a win-win situation that may be difficult to pass up.

At the end of the day, what are your thoughts on this theory? Is IC Insights theory about Intel's Fab 42 a possibility or an Area 52 delusion? Send in your comments below.