IDC Spells Out a Gloomy Smartphone Future for Android OEMs

According to a new mobile phone forecast from IDC, mature smartphone markets like North America and Europe are expected to see growth drop to single digits. In emerging markets, 2014 volumes are expected to be 1.2 billion, up from 1 billion in 2013, representing 19.3% year-over-year growth. In the longer view, IDC forecasts worldwide smartphone shipments will slow to 8.3% annual growth by 2017 and 6.2% in 2018. While IDC's forecast spells out a gloomy smartphone future for Android OEMs, it may spell opportunity for Apple.

IDC's report states that "Annual smartphone volume in 2013 surpassed 1 billion units for the first time, accounting for 39.2% growth over 2012. Ryan Reith, Program Director with IDC's Worldwide Quarterly Mobile Phone Tracker states that in the coming year, we'll see more than 200 million smartphones in active use in North America. He further states that "2014 will be an enormous transition year for the smartphone market. Not only will growth decline more than ever before, but the driving forces behind smartphone adoption are changing. New markets for growth bring different rules to play by and 'premium' will not be a major factor in the regions driving overall market growth."

As mature markets become saturated and worldwide growth slows, IDC notes that service providers and device manufacturers are seeking opportunities to move hardware wherever they can. The result is rapidly declining price points, creating challenging environments in which to turn a profit. Worldwide smartphone average selling price (ASP) was $335 in 2013, and is expected to drop to $260 by 2018.

Ramon Llamas, Research Manager with IDC's Mobile Phone team notes that "In order to reach the untapped demand within emerging markets, carriers and OEMs will need to work together to bring prices down. Last year we saw a total of 322.5 million smartphone units ship for under $150 and that number will continue to grow going forward. This week we posted a report titled "Nokia Declares War on Samsung with Exciting New Android Smartphones at Stunning Prices." Obviously by the byline, we were shocked at the prices that Nokia announced for their new hybrid Android-Windows phones that deliver quite a punch with a superior interface than most Android phones. The magic number of US$150 for a smartphone that IDC noted was met and surpassed. Nokia's high-end Nokia XL smartphone with a 5" display is only US$150 while their entry Nokia X will sell for a starting price of just US$122.

The key to note is that the phones will be shipping to markets outside of the U.S. such as Asia Pacific, Europe, India, Latin America, the Middle-East and Africa. This is an interesting development. Will Microsoft use their newly acquired Nokia Brand to win in markets outside of the U.S. while promoting Windows OS in the U.S. and Canada? The second trend is pricing. Will Microsoft be focusing on premium priced smartphones in the U.S. and Canadian markets or will they be bring in Nokia-styled pricing? Only time will tell, but this could be the year that Microsoft, under a new CEO, finally cracks the smartphone market with a hammer.

Google's Android will maintain its reign as the leading operating system throughout IDC's forecast. With a strong presence within emerging markets and attainable price points for both vendors and customers, IDC expects both a commanding market share as well as prices below the industry average. What remains to be seen is which vendors will win the contest within emerging markets, as many local vendors have gained share last year. 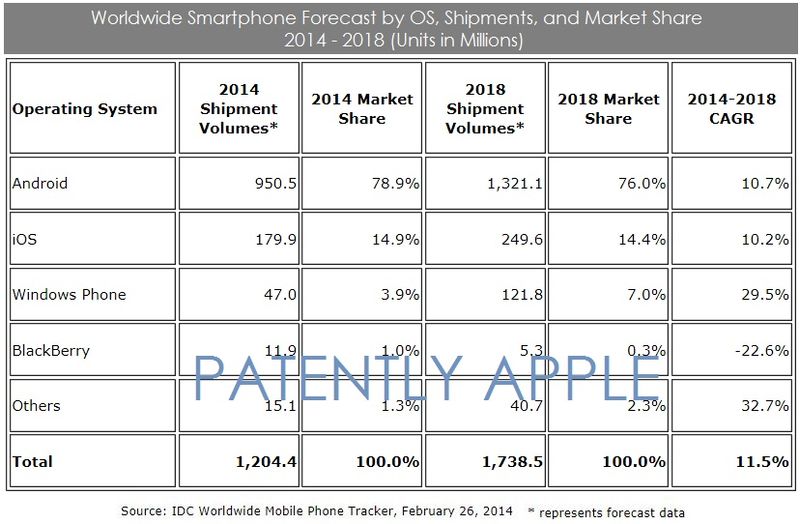 Apple's iOS will remain the clear number 2 platform behind Android and will have the highest Average Selling Price among the leading platforms at $649 in 2014 and $610 by 2018 versus $247 and $202 for Android phones. IDC notes that Apple has maintained a tight focus on the high end of the market with its most current devices, a trend they expect to see continue into the future. This could keep iOS from realizing greater volumes within emerging markets, but sales in mature markets will offset much of the difference.

Microsoft's Windows Phone stands to grow the fastest among the leading smartphone operating systems, with continued support from Nokia as well as the addition of nine new Windows Phone partners. Most of these new vendors come from emerging markets and could help bring the Windows Phone experience to customers there.

At the end of the day, consumers will generally be able to purchase smartphones at much lower prices this year and lower in the years ahead. That's great for consumers of Android products but rather gloomy for smartphone OEM's, who are experiencing razor thin margins (if not loses).

This is why Samsung's co-CEO JK Shin, head of Samsung Electronics' mobile division down-played eye-popping technology for simple-stuff. A volume-minded company like Samsung will now shift focus from trying to be an innovator to that of a price cutter.

Korean analysts agree with this line of thinking. The Korean Herald today noted that Samsung's "latest Galaxy S5 smartphone failed to wow the audience." Kim Hye-yong, analyst from Woori Investment and Securities, stated that "There was nothing new in the Galaxy S5 in terms of design and function. Most of the specifications were already anticipated."

Critics also said some of the new features had also been adopted by mobile device makers such as Sony and Apple. Some analysts said the Korean firm changed its marketing strategy in the face of cutthroat global competition.

Nam Dae-jong, an analyst from Hana Daetoo Securities, stated that "Samsung seems to have shifted its focus away from hardware improvement, and toward better pricing policies", hinting that the S5 may be priced lower than previous Samsung flagship phones.

The one forecast by IDC that might be a little on the conservative side, in my view, concerns the prospect for Windows Phone growth. While they do forecast the largest percentage of growth for smartphones going to the Windows Phone by 2018, I think that they're underscoring it. I think that Nokia declaring war on Samsung and other Android OEMs this week will gain them much more market share and growth in that timeline to 2018.

In respect to IDC's forecasts for Apple, they might be miscalculating it once again. Volume selling isn't Apple's game and never will be, so remaining in the number two spot isn't guaranteed in light of the coming price wars.

I think that Microsoft with their Nokia Brand aggressively attacking emerging markets will be much closer to Apple's 14.4% by 2018 if not surpassing it as they take share away from Samsung and others. Of course Apple will remain the most profitable OEM on the planet, so dipping to third spot in a sea of cheap smartphones for volume sake will be meaningless to Apple fans, though an ongoing point of contention with their critics on Wall Street.

And while Tizen bombed at the Mobile World Congress trade show this week, failing to find a single smartphone OEM to adopt it, Samsung is still likely to pick up the mantle before 2018 that could drag down Android and change the landscape for mobile operating systems.

While I applauded Nokia's latest smartphones earlier this week for being greatly priced, you have to put them into context. They're geared for markets that Apple won't be addressing anytime soon. They're definitely not iPhone 5C competitors. They don't offer high res displays, LTE connectivity or even a front side camera for videoconferencing with FaceTime. So while Apple may put their newest iPhone 5C that's "Unapologetically Plastic" under the microscope to fine-tune it for Christmas sales 2014, they'll never be dropping the prices down to anywhere close to the $247 price point where cheap Android phones are headed – and rightfully so.

The current iPhone 5C is in a class far beyond Nokia's new X models. They offer consumers very nice specifications in a colorful cool case that some just can't resist. Just ask Europe's hippest females. They get it. I don't think that these hip babes will be chasing down cheap plastic phones anytime soon. They want cool, but they also want value and features that keep them on the go in style.

At the end of the day, with the exception of Apple's unique market position, IDC's latest report looks like a very gloomy forecast for Android smartphone OEM's around the globe. And with Samsung giving up the ghost in trying to deliver eye-popping technology at the high end, it looks like another opportunity for Apple to take premium smartphones like the iPhone 6 to the next level and beyond without a worthy competitor in sight.

So while Wall Street continues to pound the desk singing Samsung's praises for being a volume leader, eventually a volume strategy leads to falling prices and unprofitable financial quarters like Samsung keeps experiencing. Now as the price wars are about to really kick in, innovation will take a back seat to price slashing and more unprofitable quarters are bound to roll in one after another going forward from all quarters of the Android world.

That's why Apple's strategy has been right all along. While it wouldn't hurt Apple to make their iPhone 5C, or whatever they'll call it in the future, more price competitive, the fact is that they're likely to keep their premium iPhone of-the-day priced at healthy enough prices to sustain investments in research so that they could continue to deliver eye-popping technology like Touch ID that's conveniently hidden in the iPhone's Home Button. Technology that Apple's base of customers around the globe just love and expect from Apple.

So while Android OEMs will be fighting it out at the bottom of the barrel for profit scraps come Q4, Apple will continue to deliver what they do best. They'll continue to surprise us with quality high-end iPhones with true Innovation that we love to own and better yet, give as gifts to our loved ones at Christmas. Never expect Wall Street or research analysts to ever get that.