The patent-in-suit is United States Patent No. 5,781,752 (the "'752 patent"), entitled "Table Based Data Speculation Circuit for Parallel Processing Computer" was granted to inventors Andreas Moshovos, Scott Breach, Terani Vijaykumar, and Gurindar Sohi. The inventors are leading researchers in the field of computer microprocessor architecture. Their work at the University of Wisconsin—Madison, particularly the work for which they were awarded the patent-in-suit, has significantly improved the efficiency and performance of contemporary computer processors. 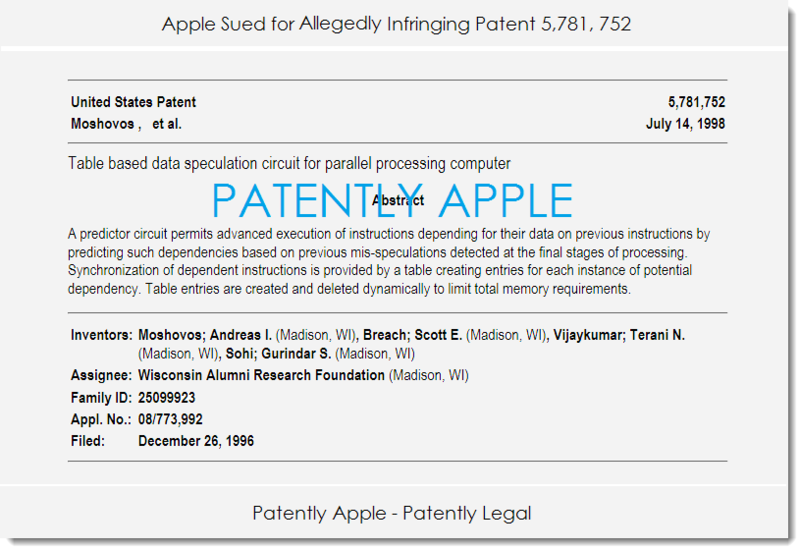 WARF is informed and believes, and on this basis alleges, that Apple is one of the largest makers of smart phones and tablet computers in the world.

WARF is informed and believes, and on this basis alleges, that Apple's newest products—including the iPhone 5S, the iPad Air, and the iPad Mini with Retina Display—each use Apple's newest A7 processor.

WARF is informed and believes, and on this basis alleges, that Apple has incorporated the technology of WARF's '752 patent into the A7 processor to achieve enhanced efficiency and performance. WARF now asks this Court to prevent Apple's unauthorized use of the '752 patent.

Apple has stated that it is the policy of the company not to accept or consider proposals regarding licensing from outside entities like WARF for any purpose, making the initiation of this lawsuit a necessity."

The complaint further states that "WARF is informed and believes, and on this basis alleges, that the acts of infringement by Defendant have been, and continue to be, willful, intentional, and in conscious disregard of WARF's rights in the '752 patent." This particular point in the complaint is basically requesting that the court triple the damages against Apple should they be found guilty of patent infringement.

The patent infringement case presented in today's report was filed in the Wisconsin Western District Court, Madison Office. At present, no Judge has been assigned to the case.