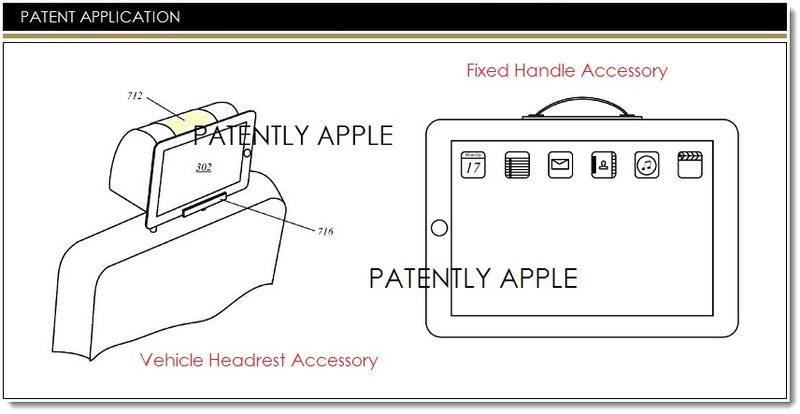 On Feb 20, 2014, the US Patent & Trademark Office published a major patent application from Apple that reveals yet another giant leap in iPad attachment designs. Apple began with the iPad Smart Cover that uses a magnet system to attach the protective cover to the iPad. Since that time, Apple's engineers have been busy designing next generation Smart Covers with advanced features that could one day include solar panels, inductive charging, integrated touch displays and take on more of a wraparound book-like appearance. In today's new round of magnetic based iPad accessory designs we're introduced to those supporting a game controller, new vehicle applications, new carrying cases, new iPad docks and a method to start or shut-off your iPad with a simple swipe of your hand across the iPad's display. Today's report is jam packed with illustrations that you won't want to miss.

Recent advances in portable computing include the introduction of hand held electronic devices and computing platforms along the lines of Apple's iPad.. These handheld computing devices can be configured such that a substantial portion of the electronic device takes the form of a display used for presenting visual content leaving little available space for an attachment mechanism that can be used for attaching an accessory device.

Conventional attachment techniques generally rely upon mechanical fasteners that typically require at least an externally accessible attaching feature on the electronic device to mate with a corresponding attaching feature on the accessory device. The presence of the external attaching feature can detract from the overall look and feel of the handheld computing device as well as add unwanted weight and complexity as well as degrade the appearance of the hand held computing device. Therefore a mechanism for releasably attaching together at least two objects is desired.

Apple's invention generally relates to a system, method, and apparatus for forming a cooperative system using magnetic attachment. Apple's iPad smart cover was the first product introducing the magnetics system. In today's patent application, Apple's engineers provide us with a complete overview of new magnetic based accessory possibilities on the horizon.

Overview of the System

In Apple's patent FIG. 33 noted below we see a table of representative operating magnetic codes and operating states; In patent FIG. 34 we're able to see a block diagram of an arrangement of functional modules utilized by an electronic device. The arrangement includes a graphical user interface (GUI) manager which operates to control information being provided to and displayed on a display device. The arrangement also includes a communication module that facilitates communication between the portable media device and an accessory device. Still further, the arrangement includes an accessory manager that operates to authenticate and acquire data from an accessory device that can be coupled to the portable media device. 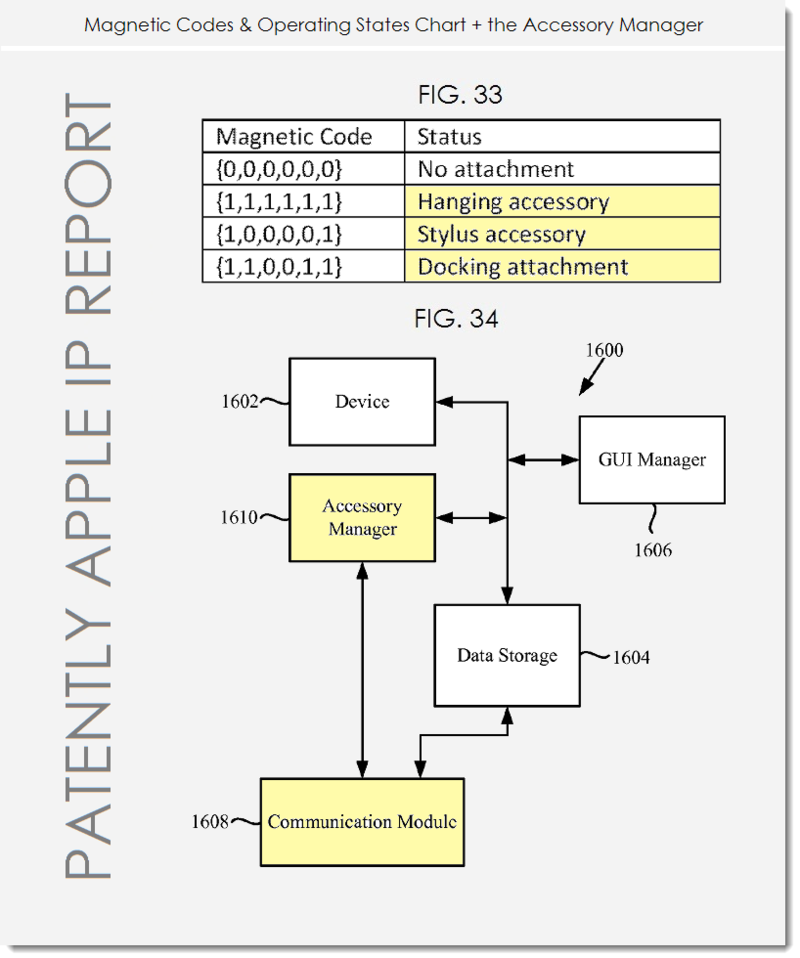 For example, the iPad can wirelessly transmit audio and in some cases video data to an appropriate receiver circuit. In this way, media data can be ported from the iPad. In one embodiment, the iPad can be used in conjunction with other electronic services available to the vehicle such as GPS. The car's built-in GPS would show up in the built-in display of the vehicle. The iPad would be able to display addition information such as traffic warnings, vehicle information like gas level, charge level and so forth. The user input can also be used to alter an operating characteristic of the vehicle, media, and so forth. 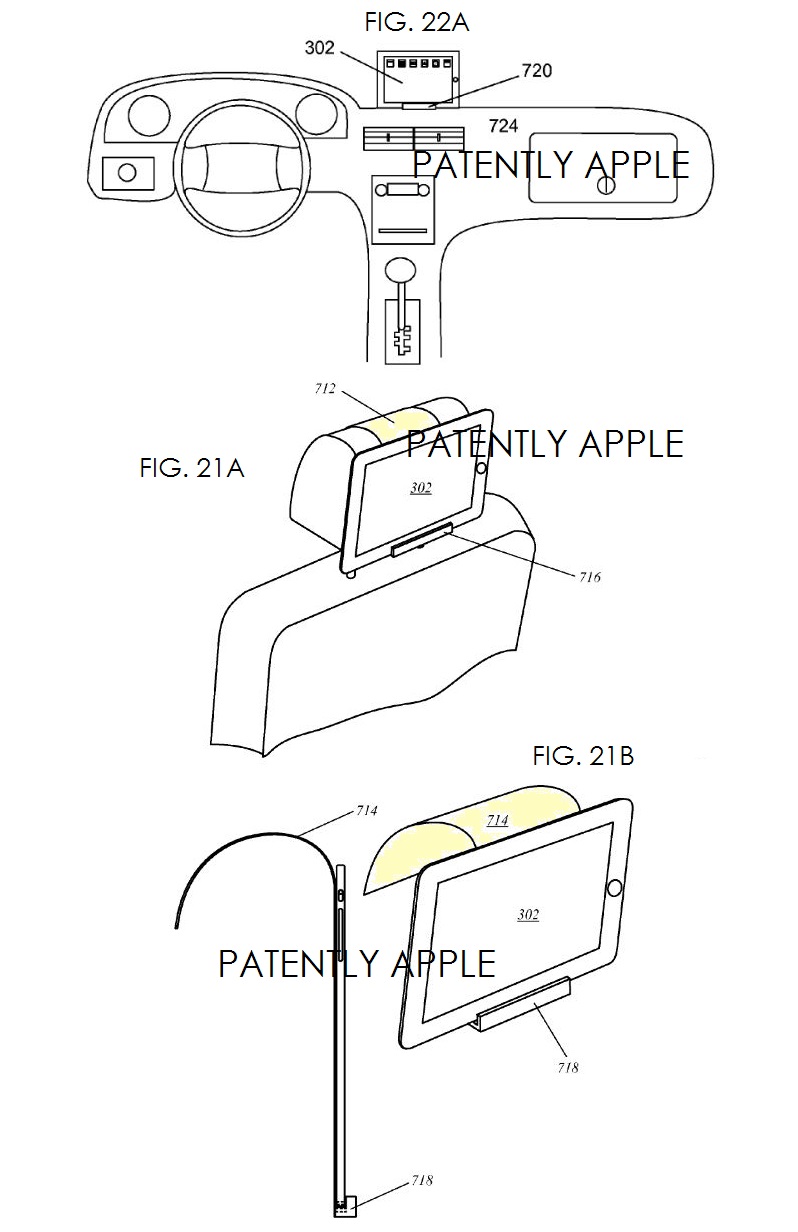 Apple's patent FIGS. 21A-21B show additional embodiments of a hanging accessory that can extend the usefulness and the range of applications for which the iPad can be used. For example, Apple's patent FIG. 21A shows the iPad mounted to a headrest of an automobile using clasp (#712) that conforms to the shape of the headrest.

In another example, FIG. 21B shows clasp #714 that can be used to hang the iPad from an airplane seat, for example, It should be noted that in both cases, the iPad is magnetically attached to both clasp 712 and 714 by way of magnetic elements embedded in base portions 716 and 718, respectively. In one embodiment, base portions 716 and 718 can be pivotally connected to the clasps in order to provide the viewer with an adjustable viewing angle. 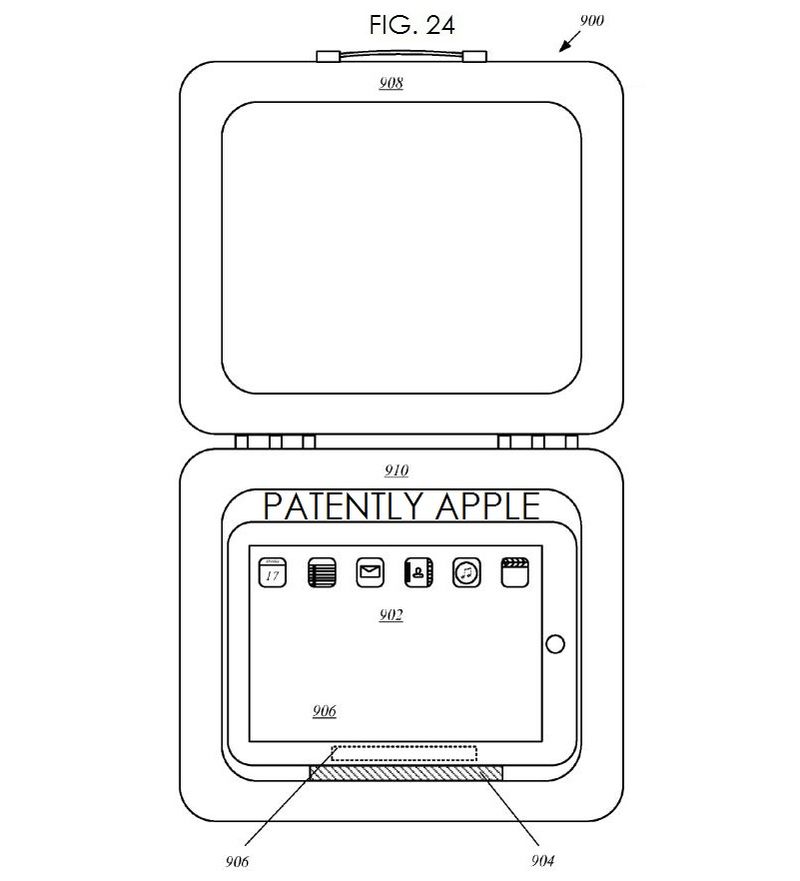 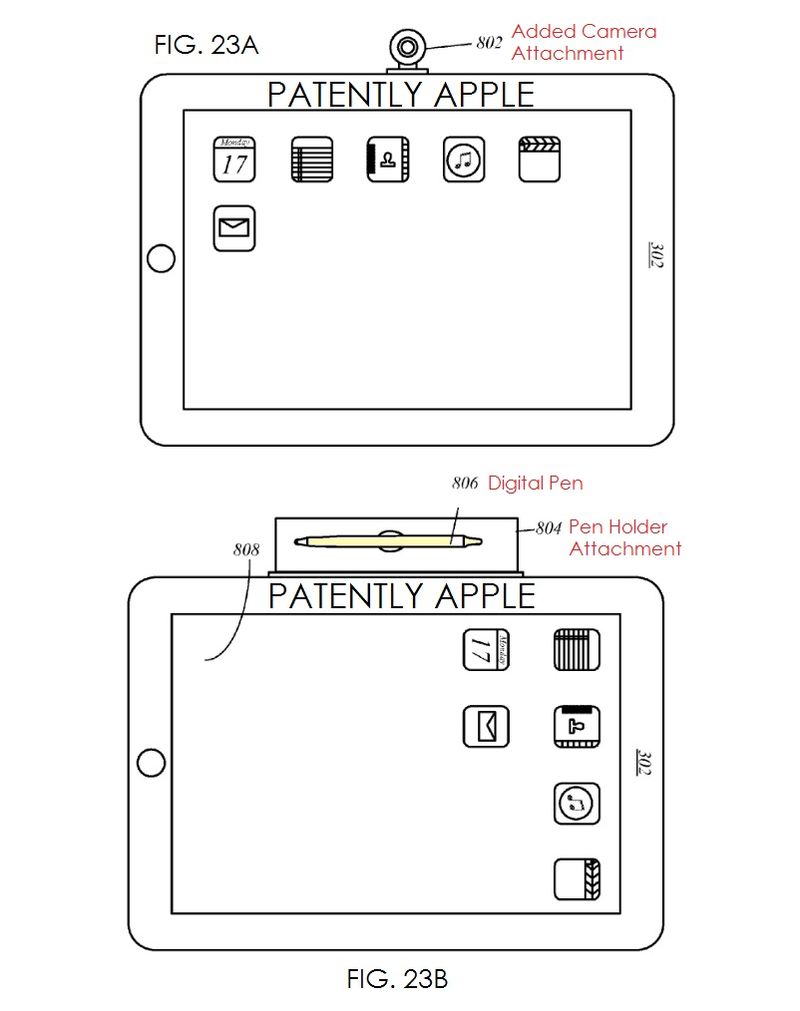 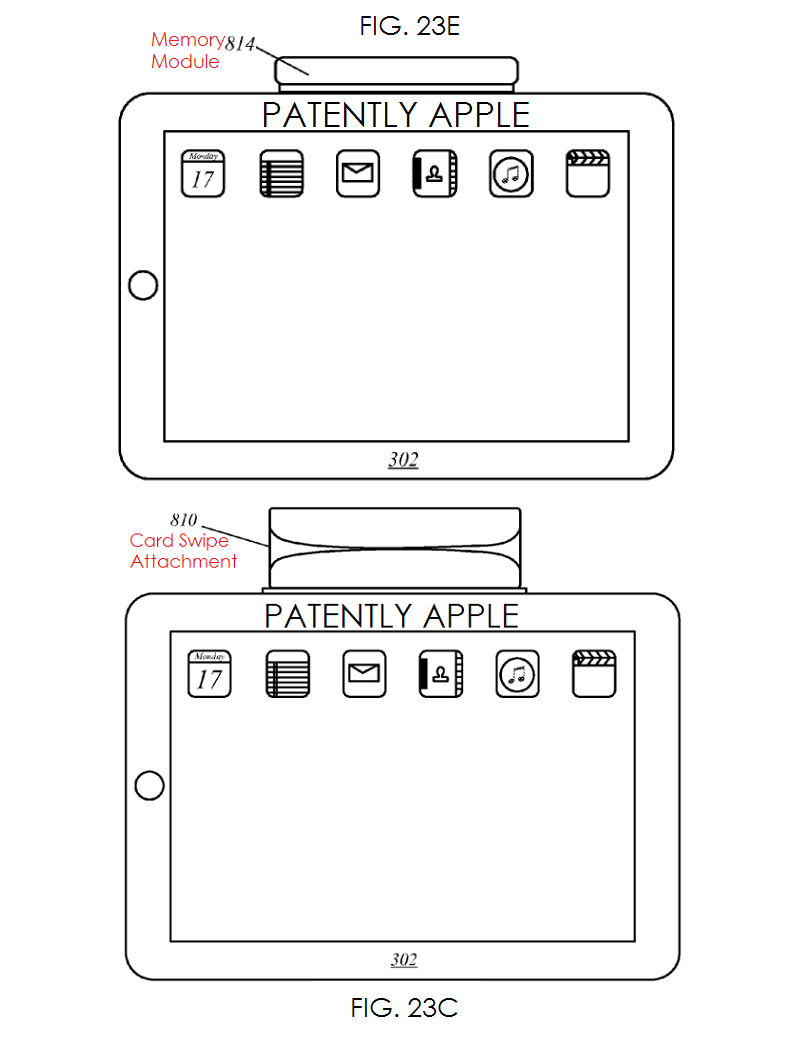 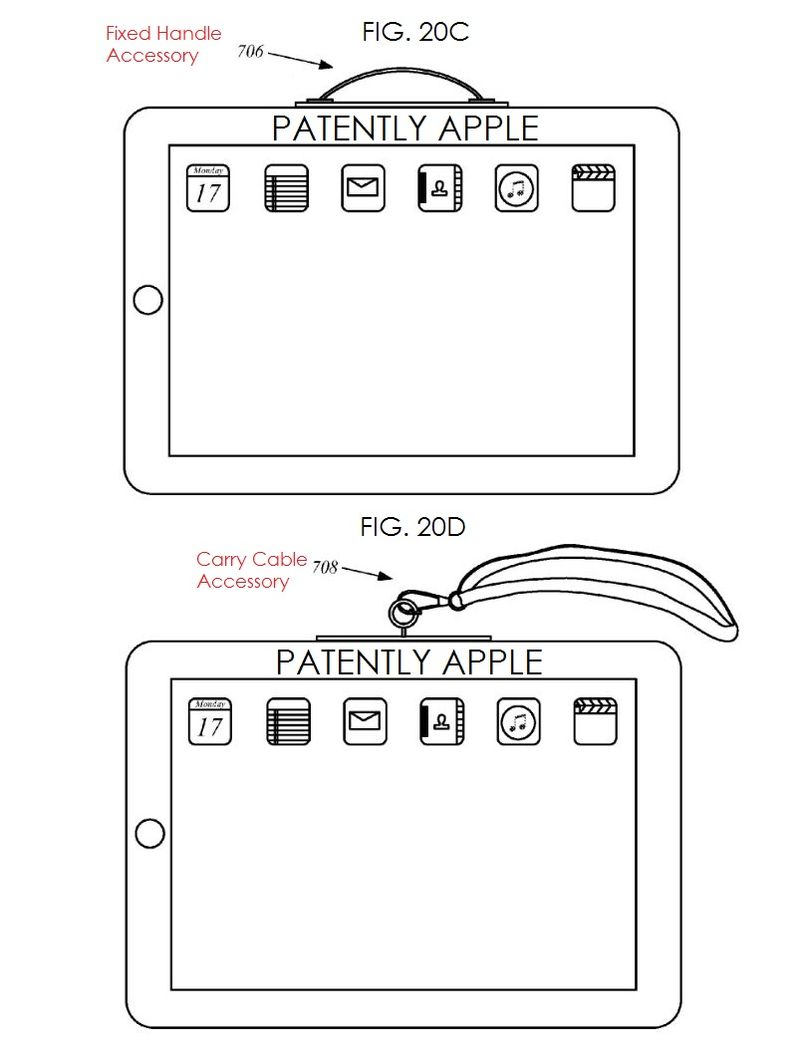 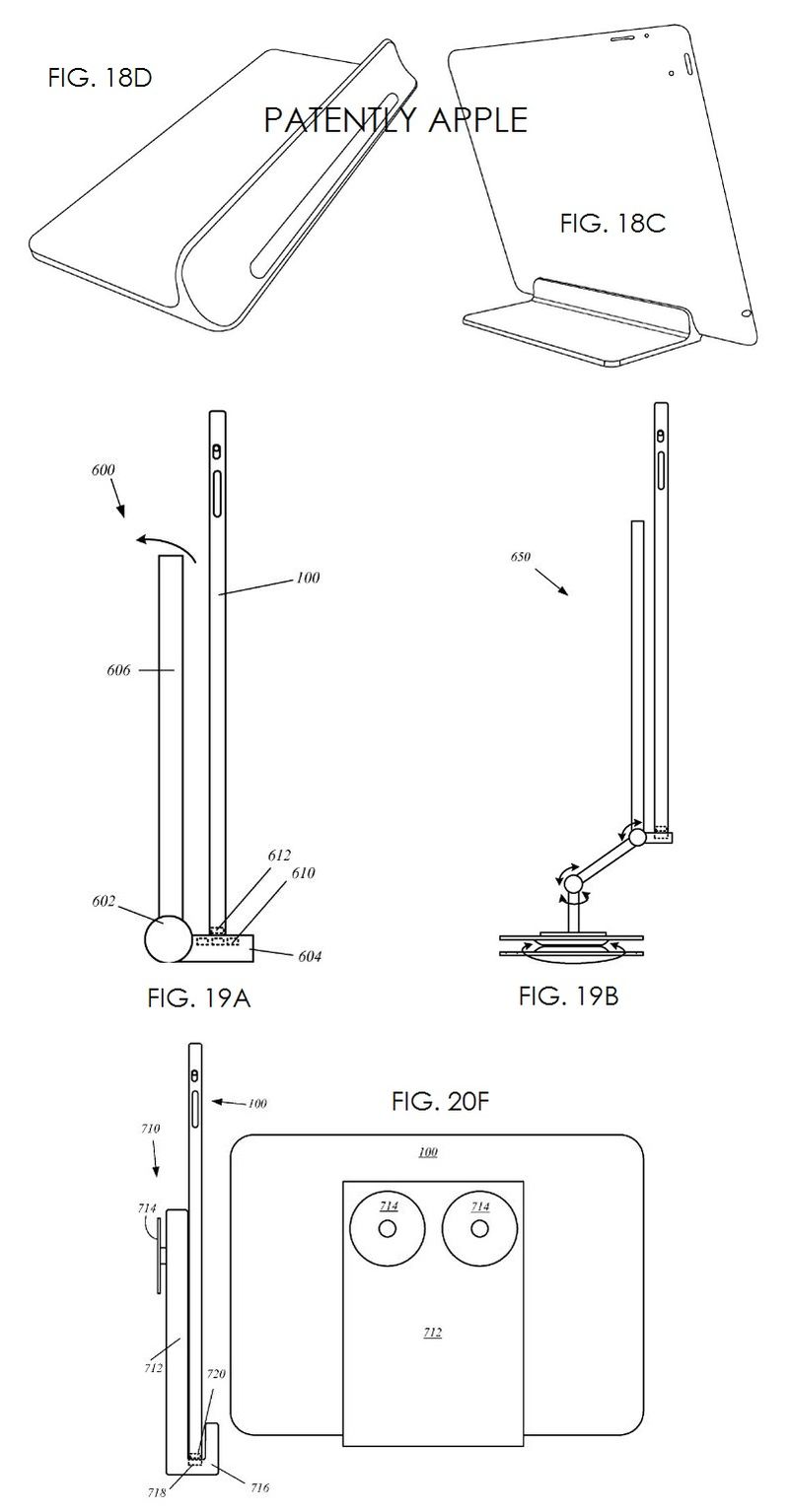 In patent FIG. 20F noted above we're able to see a hanging dock that could be attached to various surfaces such as whiteboards, black boards, smooth metal surfaces, wood surfaces, and so forth via suction cups (#714).

Turn the iPad on or off with a Simple Hand Swipe 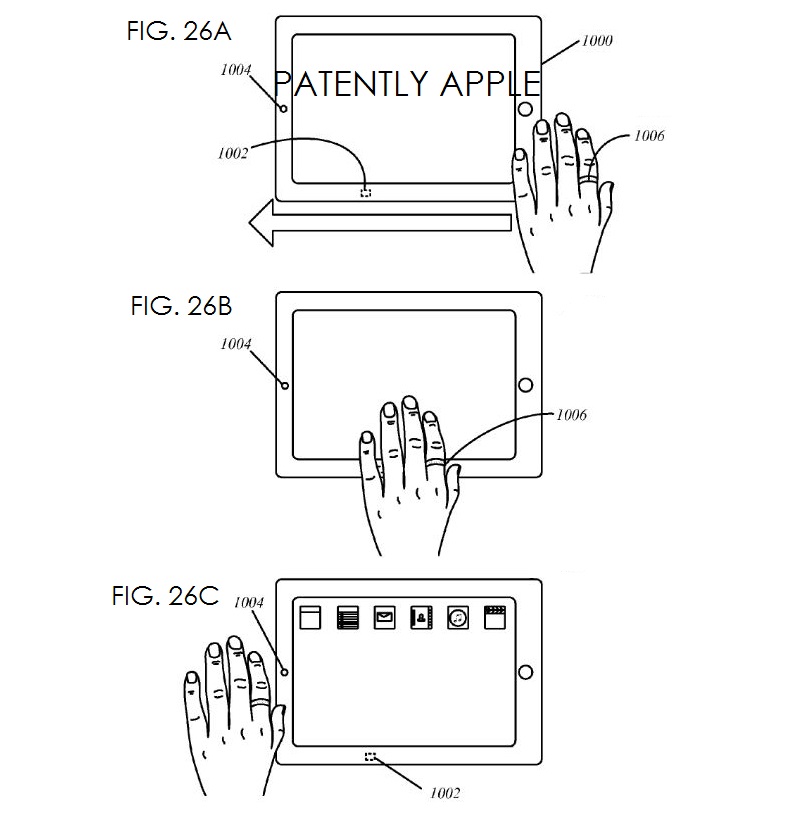 Apple's patent FIGS. 26A-26C noted above graphically illustrate a mechanism whereby a magnetically sensitive circuit, such as a Hall Effect sensor can be used to alter an operating state of an electronic device. The user will be able to swipe their hand across the iPad's display to turn the iPad on or off.

In another embodiment, additional sensors (such as ALS, ambient light sensor or camera) can be used in conjunction (or singly) to provide additional inputs that can be used to alter the operating state of the iPad in additional ways. 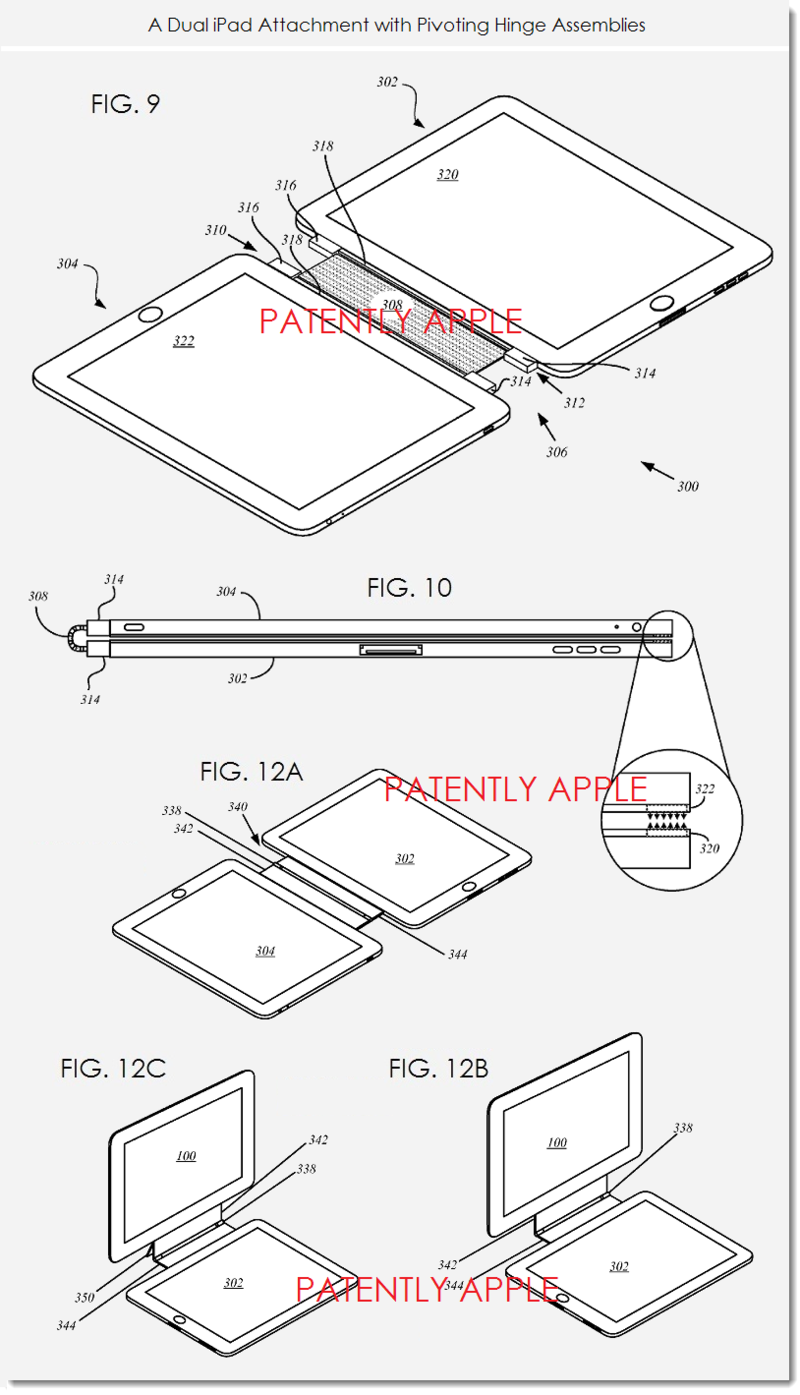 Apple's patent FIG. 10 noted above shows arrangement 300 in a closed configuration in which iPads (302 and 304) use the flexible nature of flexible connecting member (#306) to fold atop one another. In one embodiment, magnetic elements beneath the iPad's displays (320 and 322) can be arranged in such a way that it prevents the iPad displays from touching each other.

Apple credits Sean Corbin and Andrew Lauder as the inventors of patent application 20140049911 which was filed only four months ago.