On February 27, 2014, the US Patent & Trademark Office published a patent application from Apple that reveals a number of interesting possible future features for Macs, televisions or even a car dashboard. With the addition of new sensors hidden in Macs, users will be able to control some device functionality with in-air hand gesturing. Apple's new invention could also provide users with superior lighting for FaceTime videoconferencing and more.

The present invention relates generally to methods and apparatus for concealing sensors and other components of electronic devices, and particularly to concealing the presence of sensors and other components that require placement in a location of an electronic device that allows transmission of light in the visible and near-visible spectrums. A few examples of such components include cameras, infrared sensors, ambient light sensors, indicator lights, etc.

Many forms of electronic devices include components (such as sensors and light emitters) requiring the transmission or receiving of light. In many such devices, these components may be mounted adjacent a display. In many cases, a better design could be achieved if the location of these components could be at least partially concealed from view. However, such concealment may be problematic, since the passage of light through any intervening structure or surface is necessary for proper functioning of the optical devices. An example of an existing concealing structure for some types of devices includes a region of micro-perforations formed in a surface. Conventional micro-perforation configurations, however, allow for relatively limited transmission of the available light therethrough, and therefore may not be suitable for all concealment applications; and in some cases may be relatively complex and expensive to produce.

In some examples, the masking member may be a laminate structure including the two components. In many examples, the component may be mounted in a border area of a device, adjacent a display screen.

The masking member, or mask, may further comprise a translucent cover plate that is spaced from the linear polarizer, and a layer of high optical density fluid held captive between the cover plate and the linear polarizer. The high optical density fluid has a refractive index greater than that of air. Instead, or in addition, the masking member may include an opaque frame member that defines an aperture aligned with a component in the form of optical sensor, to allow the passage of light through the aperture on to the optical sensor. An outer surface of the frame member may have, at least in a region surrounding the aperture, a dark or black appearance.

Beyond the technical aspects of Apple's invention, they provide us with two clear examples of how this invention could be used in Macs in the future. The first example noted below is an iMac. The monitor 300 additionally includes an elongated peripheral recess or channel 312 which extends along the periphery 302. A series of optical components is mounted in the recess 310. In this example the optical components include a series of light emitters in the form of LEDs 320.

The LEDs may serve to illuminate a face of a user seated in front of the monitor to ensure proper lighting of the user's face, such as for photos or for videoconferencing. 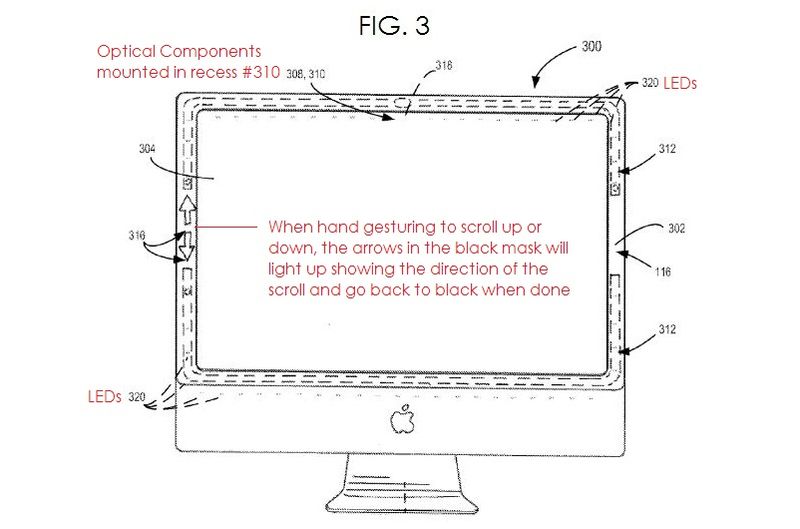 In addition, Apple notes that the monitor could further provide obscured indicia in the form of a pair of scroll arrows 316 located on a sidebar of the periphery. The arrows are constructed comprising a pair of indicator lights housed in respective recesses which are aligned with associated apertures in the layer of black ink. The apertures of the arrows are, however, shaped to provide respective indicia or icons, in this example being the respective arrows. Thus, in use, when a display on the screen is being scrolled up or down, the corresponding arrow will become visible due to automatic powering of its indicator light, but will otherwise be practically invisible to a user.

The feature noted above is enhanced by the use of a proximity sensor hidden in the display that will allow the user to control the display, such as with scrolling noted above, by simply using a hand gesture. This is confirmed later in the patent for controlling a MacBook lid window. Yet the sensor could equally apply to an iMac or a host of possible future products listed below. For instance, the proximity sensor could be integrated into a TV bezel and allow the user to turn on the television or interact with it by simply making appropriate hand gestures.

The following feature noted in Apple's invention is based on Apple launching a new MacBook Pro design that would use materials such as plastic or glass and away from aluminum. This could be a nice application for Apple's new synthetic sapphire glass down the road.

Apple notes that the MacBook Pro display lid may include a hidden display (#410) that may be connected to a proximity sensor (#426) which could be automatically activated in response to sensing of the presence of an object such as a human hand.

Apple notes that when a user brings a hand close to the lid (#406), its presence is sensed by the proximity sensor and the auxiliary display is automatically activated. The display may be arranged to display information a user may wish to access without opening and switching on the MacBook Pro, such as, for example, information regarding a user's e-mail account, when the display is implemented to indicate, for example, a number of unread e-mail messages. 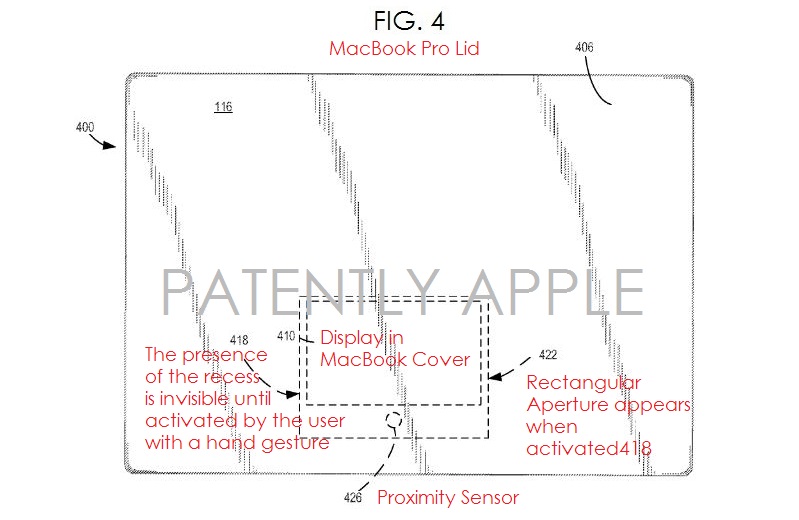 In a further use, an array or ensemble of proximity sensors, such as infrared proximity sensors, may be mounted at spaced positions on a periphery of a monitor or computer screen in order to, for example, detect human gestures. The proximity sensors may be masked by a laminate so as to obscure the sensors and provide a clean black surface to be screened periphery.

Future Products that may use this Invention

According to Apple, the invention has been described in the context of "electronic devices," which is used to identify any of a wide variety of electrically powered devices, including without limitation: communication devices such as cell phones or land line phones; music and multimedia players; gaming devices; televisions; set top boxes, such as for televisions and other display systems; controllers, such as remote controls for operating other devices and gaming controllers; Personal Digital Assistants (PDAs); and computing devices of all forms (desktops, laptops, servers, tablets, palmtops, workstations, etc.) as well as associated components such as monitors (either separate or as part of an all-in-one systems), external drives, etc.; and many other types of devices in a variety of fields.

In fact, Apple further notes that the methods and apparatus are equally applicable to a much broader arrange of electronic devices beyond the consumer electronics and computer fields. For example, the above-described methods and structures may also be used in automotive applications (for example to provide masked indicators on a vehicle dashboard), on medical devices (for example, as indicators of various types), and in a broad range of other device types and applications.

Apple credits David Amm, James Dudley and Peter Mahowald as the inventors of patent application 20140055856 which was originally filed in Q4 2013.