More than 100,000 companies were threatened in 2012 alone with infringement suits by businesses whose sole mission is to extract royalty revenue, according to a White House report. Those entities, called pejoratively "patent trolls" by critics, filed 19 percent of all patent lawsuits from 2007 to 2011, according to the Government Accountability Office. In December, the U.S. overwhelmingly passed the "Innovation Act" against patent trolls. Today in Washington, the justices debated how best to deter meritless suits as they weighed in on the rules that govern fee awards in patent litigation. Apple and Google are among the companies urging the court to lower the bar for fee awards.

One of Patently Apple's reports on patent trolls that were posted in August 2013 noted that Apple was still the number one target of patent trolls dating back to 2009 with 171 cases brought against them. By the end of the year that number had climbed to 191. Patently Apple has been highlighting the issue of patent trolls in earnest since August 2012 and you could visit our Patent Troll Archives for more information on this ongoing issue.

Bloomberg's report that was filed earlier today noted that "The justices voiced concern about patent misuse by companies of all sizes. Justice Antonin Scalia said large businesses could use their patents in a 'shakedown' to drive smaller competitors out of the market.

Justice Stephen Breyer said owners of weak patents were using the high cost of litigation to extract cheap and easy settlements. 'It may be a small slice of litigation, but it's a small slice that costs a lot of people a lot of money," Breyer said. The current standard of awarding fees "leaned pretty much against the person who was sued.'" 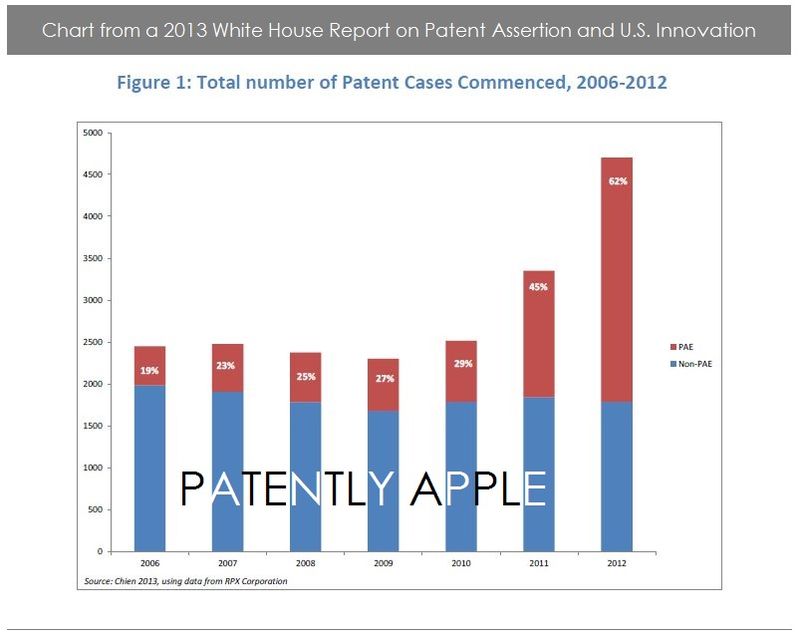 Congress is considering legislation that would make the loser in a patent case pay the winner's fees unless a judge finds that it wouldn't be fair, such as in close cases or when the patent owner is unable to pay. A three-judge panel of the Federal Circuit, in a December ruling, said judges must consider the "totality of the circumstances."

Bloomberg noted that "The case before the justices today involves Octane Fitness LLC, which is seeking as much as $1.8 million in fees after defeating a patent suit. Octane was sued by Icon Health & Fitness Inc., another exercise equipment maker, over a component in elliptical machines.

Octane is challenging the test for awards established in 2005 by the U.S. Court of Appeals for the Federal Circuit, which handles patent cases. The Federal Circuit allows fees if a suit is 'objectively baseless' and was filed in bad faith.

The U.S. Patent Act says fees can be awarded 'in exceptional cases,' and the justices grappled with how to define that phrase. 'I'm not sure what words we're going to give to the district court if you're to prevail,' Justice Anthony Kennedy told Octane's lawyer, Rudolph Telscher, calling the case 'a search for adjectives.'"

Side Note: To review some of the cases brought by Patent Trolls against Apple, see our Patently Legal Archives.