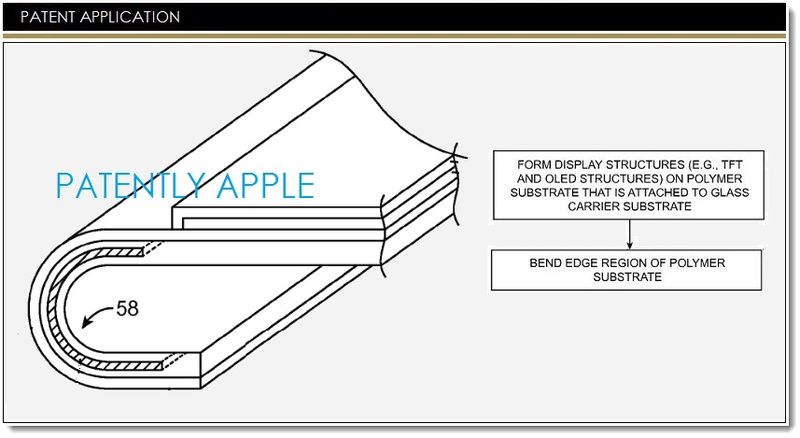 On February 13, 2014, the US Patent & Trademark Office published a patent application from Apple titled "Flexible Displays." Apple's work on flexible displays began to surface back in August 2012 and several key patent pending flexible display inventions have surfaced since. Earlier this week a Korean report surfaced suggesting that Apple may be working on a bezel-free version of the iPhone. Today's patent revelations revolve around the technical techniques of reducing a display border by bending the sides of a display surface. The invention could apply to a future iPhone, iPad or wearable smartwatch-like computer and beyond.

Apple notes in their patent background that manufacturers include border housings disposed to cover and obscure peripheral circuitry and other non-active display areas from end users in the assembled displays, resulting in increases in size and weight. Some manufacturers employ display border reduction techniques in an attempt to reduce relative size of border housings and in order to enhance an overall aesthetic of assembled displays.

Flexible display technologies offer alternative reduction techniques, including permanent bending of outlying display areas to reduce planar surface area as seen from a vantage point in front of an assembled display, while still allowing for arrangement of peripheral circuitry proximate associated display panel areas. However, if care is not taken, permanent bends in flexible displays may result in reduced reliability or component failure, increases in resistivity in outlying electrode connections, and other drawbacks including a minimum radius of curvature too large to garner any significant benefit in display border reductions.

The goal of the invention is to provide improved displays for electronic devices such a smartphone, tablet, wrist-watch devices, wearable and miniature devices utilizing an OLED based flexible display.

Apple's invention details display devices that include a plurality of innovations configured to allow bending of a portion or portions of a periphery thereof to reduce apparent border regions and decrease a surface area of inactive components (e.g., border area) of an assembled display device.

Conductive films may be applied to electrodes before, during, or after bending in a repair process. Mechanical stresses may be reduced by adding protective films over components in addition to disclosed encapsulation layers.

A temperature of a substrate to be bent may be increased slightly or significantly to promote bending without breakage. Metals such as stainless steel with a passive dielectric layer may be used as bendable or flexible substrates rather than conventional materials.

Optical markers and/or fiducials may be used in several identification and aligning process steps to ensure appropriate bends absent breakage of sensitive components. Electrical interconnection thickness may be varied across a bend or fold region to minimize stresses about the bend or fold region.

A display panel may be actively monitored during device assembly and bending operations to monitor damage to components and interconnections. Bending may be performed only in bend or fold regions having only metal or electrical traces rather than active display components or peripheral circuitry in some embodiments.

Separate conductors may be used in bend or fold regions such as conductive ink, copper, or aluminum to promote bending rather than breaking during bend operations. Furthermore, bending operations may be performed in inert atmospheres with re-coat or repair applications performed during or after the bending operations.

Apple's patent FIG. 5 noted below is a cross-sectional view of a portion of an illustrative display with bent edge portions and neutral plane adjustment features. 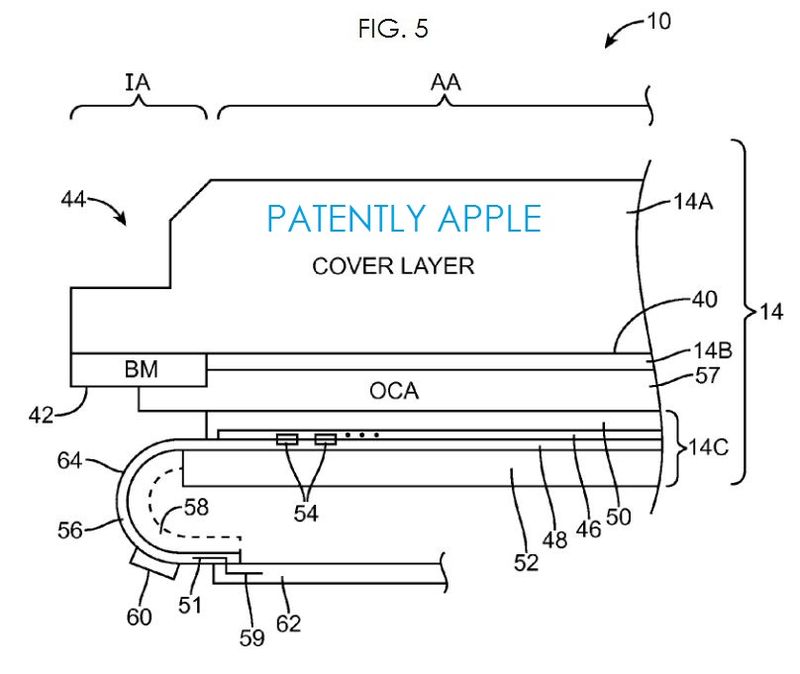 Apple's patent FIG. 9 is a perspective view of a portion of an illustrative display showing how neutral plane adjustment features may include an air gap in a backfilm layer. 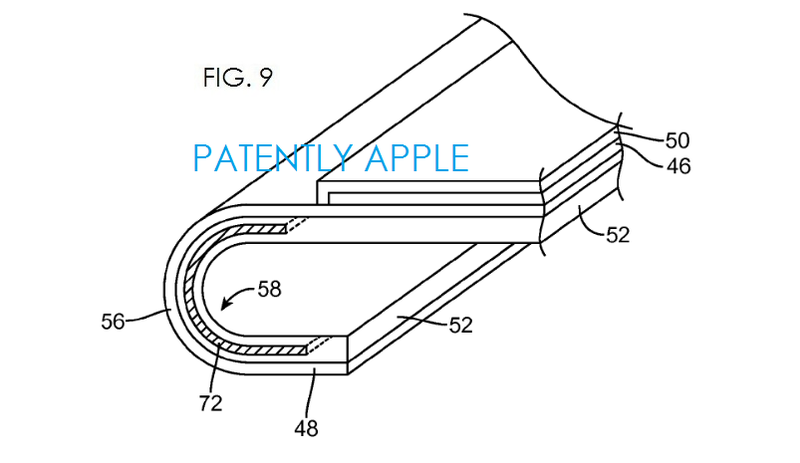 Apple's patent FIG. 12 is a perspective view of a portion of an illustrative display polymer layer showing how conductive traces on the polymer layer may be split into multiple conductive sub-traces in a bend region of the display. 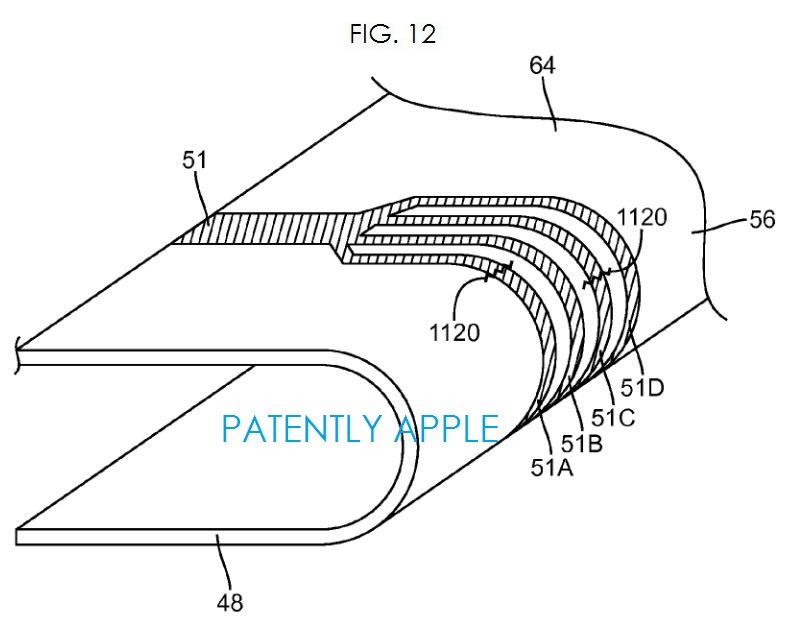 Samsung introduces us to the Adjustable Transparent Display