On February 6, 2014, the US Patent & Trademark Office published a patent application from Apple titled "Automatically Changing a Language for Electronic Messages." Apple's invention generally relates to technique for automatically choosing a language to use when sending a text message or email.

In a globally-connected world, electronic messages in the form of text or email may be sent and received in many different languages. Operating systems and messaging clients have begun to include support for multiple languages, but the user interface for switching between languages and adding a new language to the set of languages allowed or directly available to the user has typically required significant user intervention. Typically, a user must navigate through multiple levels of settings controls, sometimes requiring the user to leave the current application and return after making a language selection. Once the change in language has been made, reversion to a previous language does not happen automatically, but typically requires similar navigation through settings controls. All of this must be repeated any time the user wishes to change to a different language or add a new language.

In addition, language handling in operating systems and messaging clients is somewhat disconnected from the actual knowledge of languages by a user. A user fluent in (for example) Italian, but using a device initially configured for English may be unable to access Italian language features without explicitly indicating to the device that Italian is a known language, which may further diverge from the intended activity of the user that would involve use of Italian.

Because of the effort needed to switch between active languages and the effort required to add a new language to the set of known languages, users may decide not to make the switch to the other language, resulting in a less than optimal experience for one or both of the sender and recipient of the electronic message. For example, the user that is fluent in Italian may receive a message in Italian and prefer to respond in that language, knowing the recipient would prefer to communicate in Italian, but instead reply in English simply to avoid the effort of switching languages in the device. Better and more automatic handling of languages would improve user experiences and thus be desirable.

Automatically Changing a Language for Email

Apple's invention generally relates to technique for automatically choosing a language to use when sending a text message or email.

A user may override the automatically selected language if desired. Information about what languages are known by the user may be inferred based on the language information extracted from a received message or directly from the language used to write the current message analyzing the type and occurrence of actions from the auto-corrector. Adaptive techniques may be used to limit or control which languages may be selected or offered for selection, based on previous user interactions. 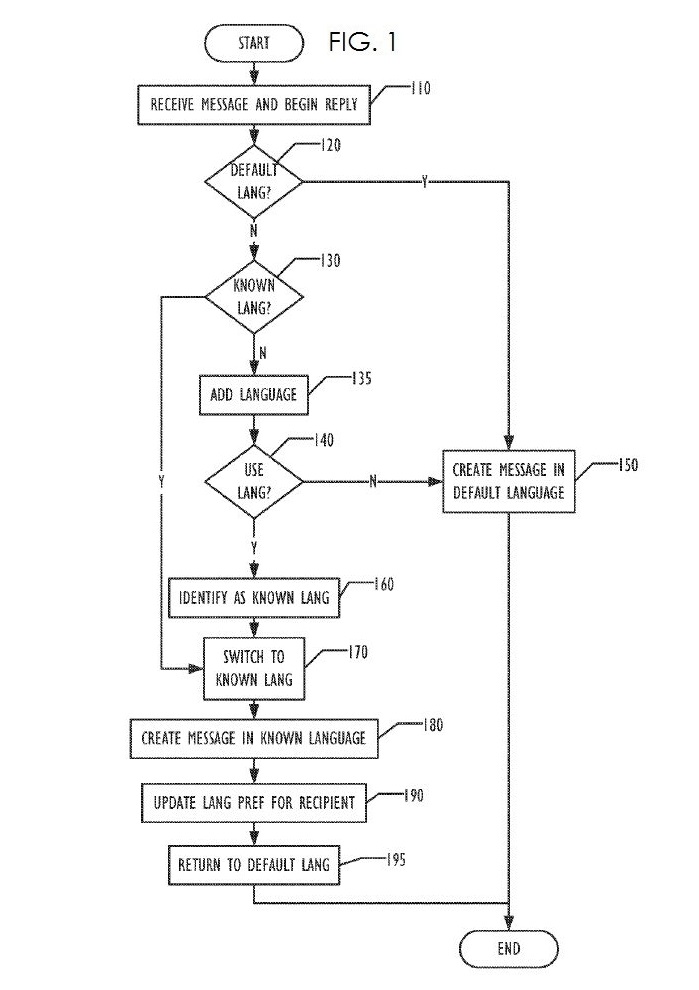 Apple credits Alessandro Pelosi as the sole inventor of this patent application 20140039874 which was originally filed in Q3 2012.

Motorola Invents a Spacebar with an Integrated Mini Trackpad