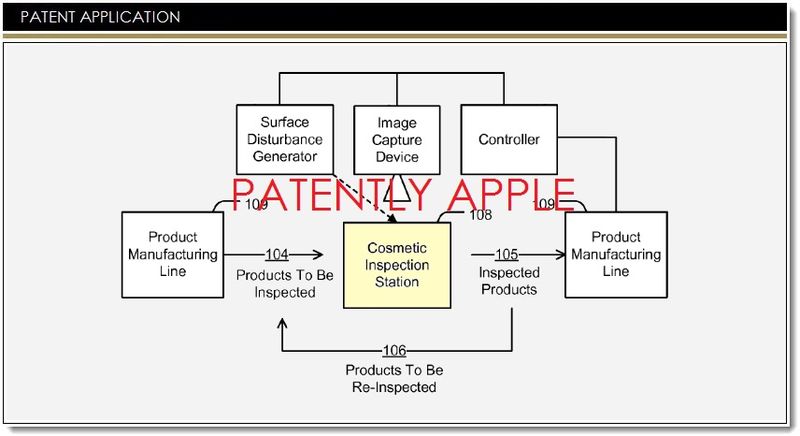 On February 27, 2014, the US Patent & Trademark Office published a patent application from Apple that reveals yet another level of their fanatical attention to detail to ensure that iDevices rolling off the production line are particle and blemish free. Earlier today we posted another report covering Apple's intent to add self-healing material to iDevice and Mac display backlights to ensure that artifacts are self-eliminated. So while Apple advances their iDevices with features like Touch ID, we able to see through today's inventions that they also pay attention to the finer details that make premium Apple products. Today's report concludes with revisiting Apple's patent pending invention regarding a handheld standalone camera that Apple is still tweaking.

Conventionally, automated cosmetic inspection of devices is limited to a positive or negative result of a device's overall quality compared to a threshold value or set of threshold values. For example, automated cosmetic inspection may compare a measurement of a manufactured device's attributes to determine if minimum threshold color translucency, chromaticity, surface evenness, dimensions, or other suitable thresholds are met satisfactorily. Products failing this determination are typically discarded.

Therefore, what is needed is a method of in-line automated cosmetic inspection which better analyzes product quality while limiting the need for costly individual inspections which may introduce surface blemishes or other damage to products.

Apple's patent FIG. 1 noted below is a schematic of a system for in-line cosmetic inspection.

In Apple's patent FIG. 2 noted below we're able to see an expanded view of a portion of a cosmetic inspection station of the system of FIG. 1. As shown, a product may be received at the cosmetic inspection station. A view or area to be viewed (#202) represents a portion of the product (#201an Apple iPhone) that may be imaged or photographed by a camera. During cosmetic inspection, one or more surface disturbing mechanisms (#210) may be actuated to disturb or move loose or relatively loose particles or debris on a portion of the surface being imaged. After surface disturbance, one or more images may be taken and compared to prior images to determine if any detectable blemishes are surface defects or loose particles. This is illustrated more clearly in FIGS. 3A-3B and described below. 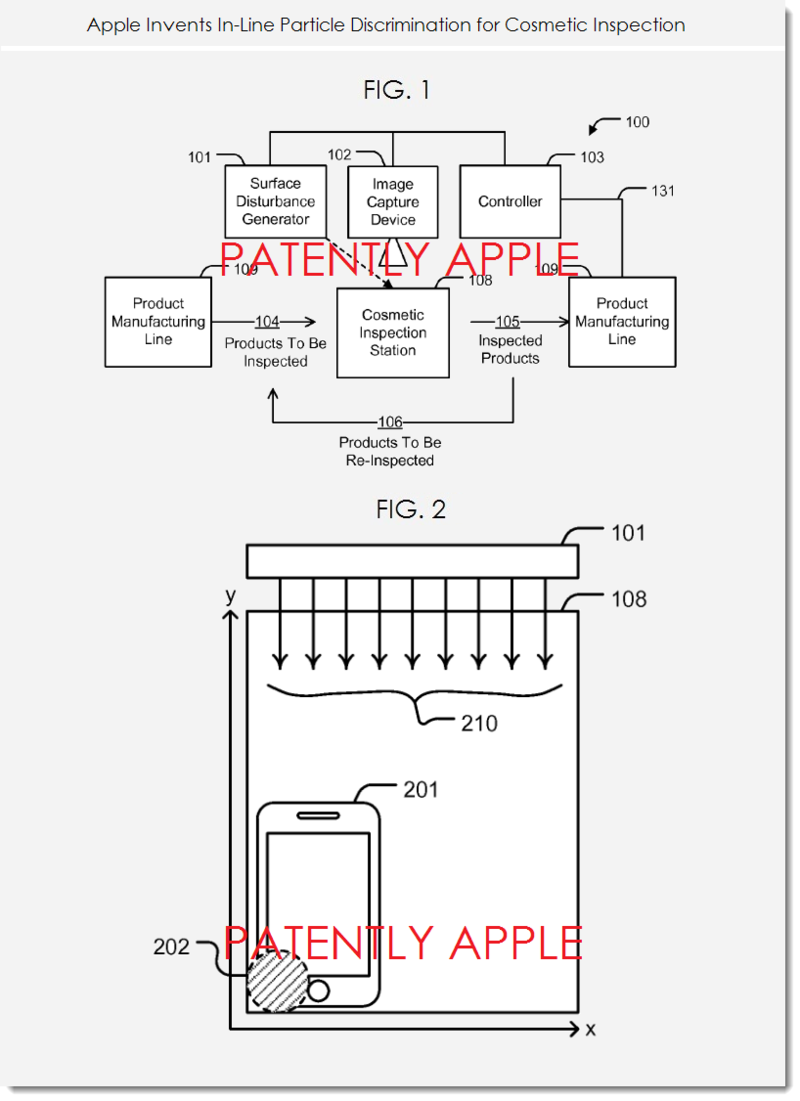 In Apple's patent FIGS. 3A and 3B noted further below we're able to see a portion of an in-line cosmetic inspection methodology, according to an embodiment of the present invention. As shown, the first image (#202a) depicts a plurality of detectable surface blemishes 301-302 on a surface of the product. Upon detection, the surface of the product may be disturbed, for example, by applying compressed air, uncompressed air, or vibrating the product. Thereafter, a second image #202b may be taken and processed, and further compared to image #202a to determine that the blemishes #301 are loose particles while blemish #302 may be an immobile particle or surface defect. Thereafter, manual inspection may be appropriate to ascertain whether blemish #302 is in fact loose debris or a surface defect which may or may not be repairable. Alternatively, the product may be tagged for further inspection and reinserted onto a product manufacturing line. 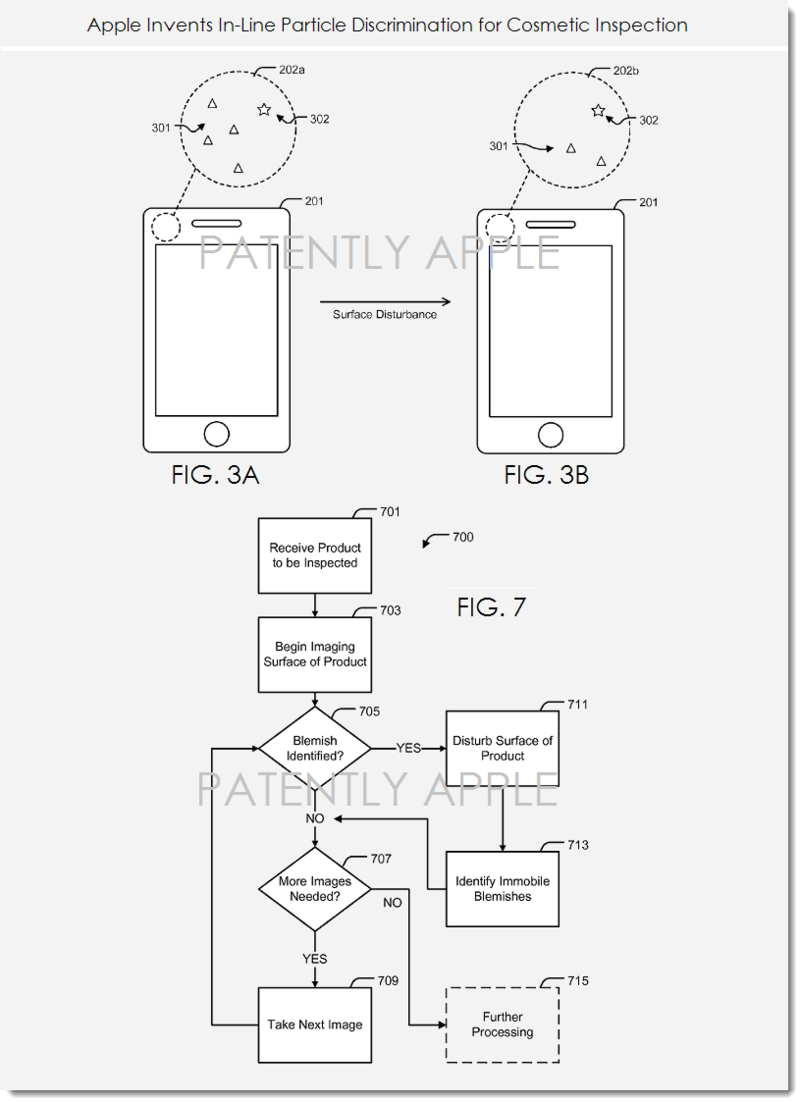 Apple's patent FIG. 7 is a flowchart of a method of in-line cosmetic inspection.

Apple credits Brett Ong, Daniel Karraker and Joseph Rubin as the inventors of patent application 20140055600 which was originally filed in Q3 2012. Like the vast majority of continuation patents, Apple is simply updating and tweaking their patent claims in order to get the patent approved at the US Patent Office. In this case Apple cancelled the first 13 claims found in the original patent and added a few new ones such as the two noted below:

Because Apple's refocused patent claims now show that their true interest in this patent pending invention is either a standalone camera device or the ability to combine acoustic ports to a camera lens in current iDevices, we felt that this patent application was worthy of being highlighted once again. See Apple's continuation patent 20140055660 for more details.