Steve Jobs stated during an interview with Walt Mossberg in 2010 that "PC's are going to be like trucks. They're still going to be around. They're still going to have a lot of value," but that PC's, as clearly defined as desktops and notebooks, were going to be replaced by Post PC devices. Steve Jobs was talking up the Post PC era in that interview, a term which Jobs popularized back in 2007, according to Wikipedia. Since the roll out of the iPad, PC sales have been steadily falling off a cliff at a steady pace. In fact, Sony just announced that they're getting out of the traditional PC market – puff, gone. Apparently, the only ones that didn't get that memo about the Post PC era, was analyst firm Canalys.

According to a new Canalys report published yesterday, Apple remained the PC market leader in Q4, shipping 30.9 million units to take a 19.5% share of the market. It shipped 26.0 million iPads, which accounted for 84.3% of its total shipments in Q4. 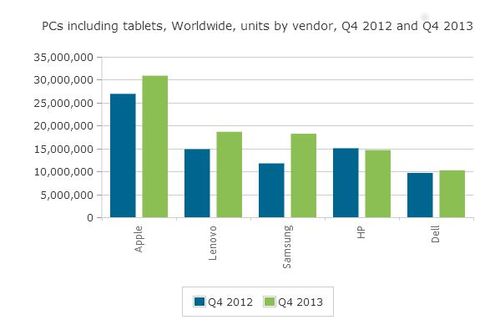 It's a mystery to me as to why some Apple sites are reporting on this nonsense. If you take out iPad sales, which we should, Apple would be shown on this chart as dead last at about half of Dell's stats.

The iPad, according to Steve Jobs and other Apple executives, is a Post PC era device. So clumping the iPad in with traditional PC's to create a mythical statistic is nothing shy of lunacy of the highest order. We can't have it both ways, even if it sounds nice on paper.

In Related News, "Gartner Says PC Market in Western Europe Declined 4 Percent in Fourth Quarter of 2013." In that report, Apple didn't even make the top five in real PC sales in European Centers like France and Germany.

In respect to overall PC sales in Western Europe, the report further noted that "The battle for the fifth place was fierce. Apple and Dell were very close in volume terms, but Apple won the number 5 position in the fourth quarter of 2013 with double-digit growth."