A Spectacular iPen Patent from Apple Surfaces in Europe 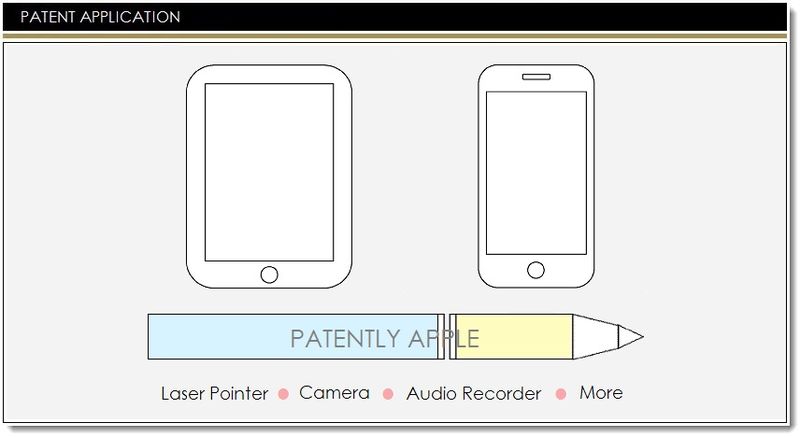 Wow, what a week it's been for Apple's future iPen. It began on Tuesday with a surprise granted patent focused on iPen orientation detection followed by three detailed patent applications covering a multitude of features on Thursday. And while we were busy writing those reports we happen to stumble upon two more iPen patent applications that Apple filed in Europe that same day. The main patent filing is a spectacular overview of a modular iPen design that would allow users to choose different modules for different tasks. One feature, for example, would allow a student or business user giving a presentation to use this iPen as an advanced laser pointer. Apple's latest European filing is without a doubt one of the most sophisticated of them all to date. It's intelligently designed so that Apple will be able to introduce new accessory "expansion modules" over time so as to keep the iPen up to date with the latest and greatest features. In fact, Apple's patent application provides us with a number of possible iPen expansion module examples that they already have in mind.

As we noted earlier this week, the late Steve Jobs wasn't a big fan of the "dumb stylus" of yesteryear that was basically a tiny plastic stick – and so he set out to reinvent it. The project now has over 22 known patents on record and this week we've been shown once again that Apple is still determined to continue this work until their breakthrough design is finally achieved. With that said, let's dig in to Apple's current invention.

Touch sensitive devices have become popular as input devices to computing systems due to their ease and versatility of operation as well as their declining price. As touch sensing technology continues to improve, touch sensitive devices are increasingly being used to compose and mark-up electronic documents. In particular, styluses have become popular input devices as they emulate the feel of traditional writing instruments.

However, while touch technology has greatly improved over the past few years, little has been done to improve the stylus itself. Most conventional styluses simply include a tip configured to interact with the touch sensitive device and an optional pen insert for writing on paper. As a result, conventional styluses suffer from poor performance and offer limited functionality.

Each of the expansion modules could include one or more of a power source, camera, audio recorder, communication circuit, gyroscope, accelerometer, laser pointer, projector, or the like.

Overview of the Modular Stylus/iPen 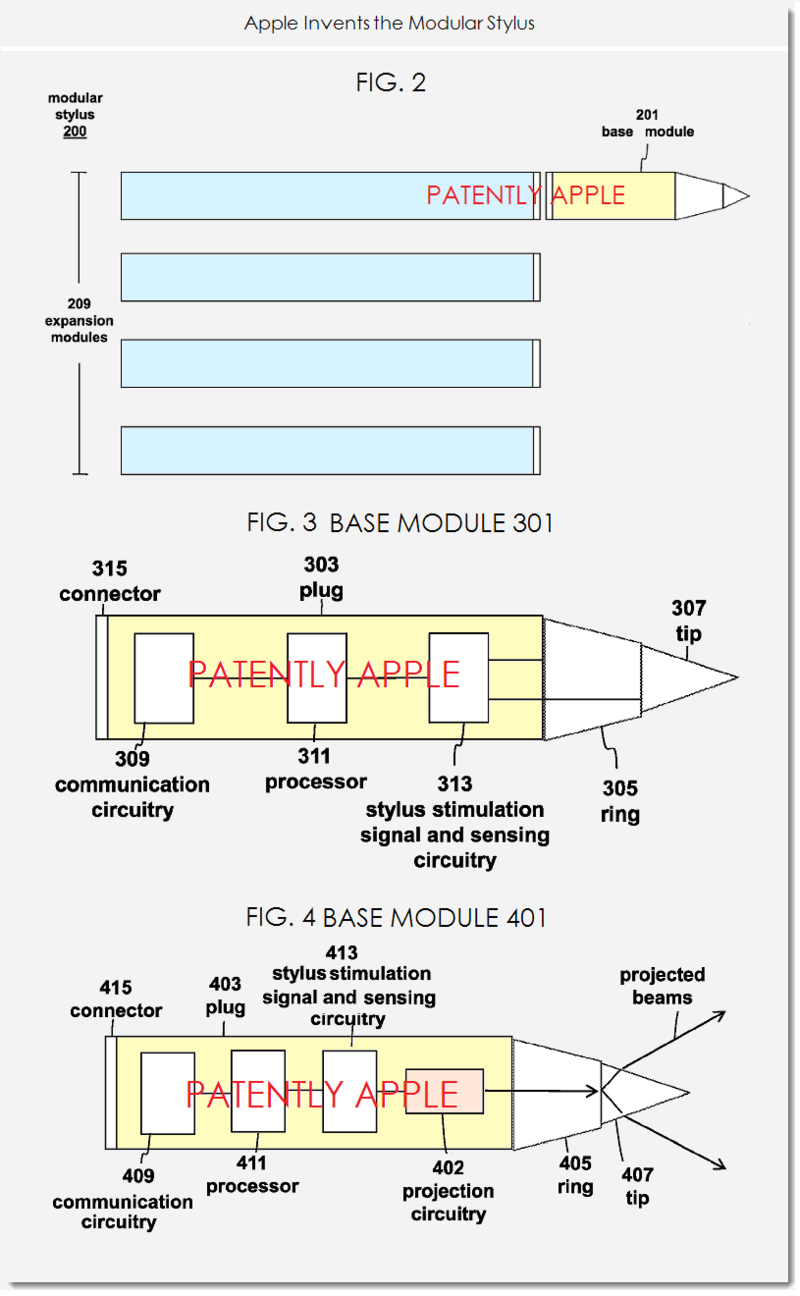 Apple's patent FIG. 2 illustrates a block diagram of an exemplary modular stylus 200 that can be used with a touch sensitive device, such as a mobile phone (iPhone), touchpad (iPad), portable computer (MacBook), or the like. 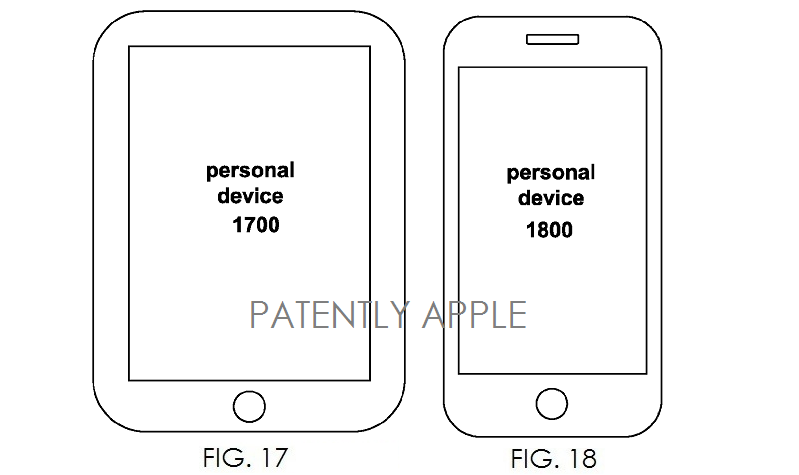 In respect to patent FIG. 3 noted above, Apple interestingly notes that that the ring, shown as patent point #305, could serve other purposes such as providing an alternative means for transmitting the stylus stimulation signal from the stylus to the touch sensitive device by serving as an antenna for a wireless module (e.g., RFID, Bluetooth, WI-FI, or the like).

In the embodiment shown in patent FIG. 4 above, the tip of the stylus (#407) could include a transparent lens and tip assembly having a suitable conductive coating. The base module (#401) could also include projection circuitry (#402) operable to project an image through tip.

In some examples, the projection circuitry could include a camera to image the projection surface for position detection by correlation (e.g., a technique similar to that used by optical mice) and/or to image an object (e.g., to provide scanner and/or camera functions).

Apple's patent FIG. 5 noted below presents us with a block diagram of one exemplary expansion module # 509 for providing a laser pointer functionality that could be used as an expansion module of modular stylus.

Apple notes that the projection circuitry could include a light-source (e.g., laser, LED, digital light processing (DLP) projector, LCD projector, or the like), liquid crystal module (LCM) to modulate the light according to image data.

For this feature, Apple states that the expansion module could further include a laser pointer #519 of patent FIG. 5 for emitting a low-powered beam of visible light. In some examples, the laser pointer could include a colored laser diode having any desired color. However, any known laser technology could be used.

Apple further notes that the expansion module could further include a push-button, switch, or other input device to allow the user to selectively control the laser pointer.

In some examples, the expansion module could be attached to the base module when the modular stylus is to be used for a presentation. Providing the modular stylus with a laser pointer advantageously allows a user to enter inputs into a touch sensitive device, such as a tablet computer or touchpad, and point to an image being displayed overhead using the same device. 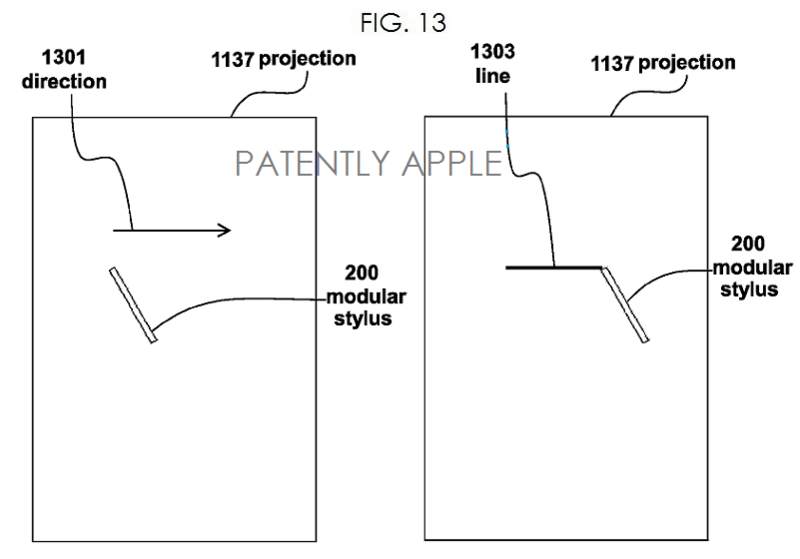 Apple's patent FIG. 11 shown below illustrates the operation of an exemplary modular stylus having a projector in the base module. 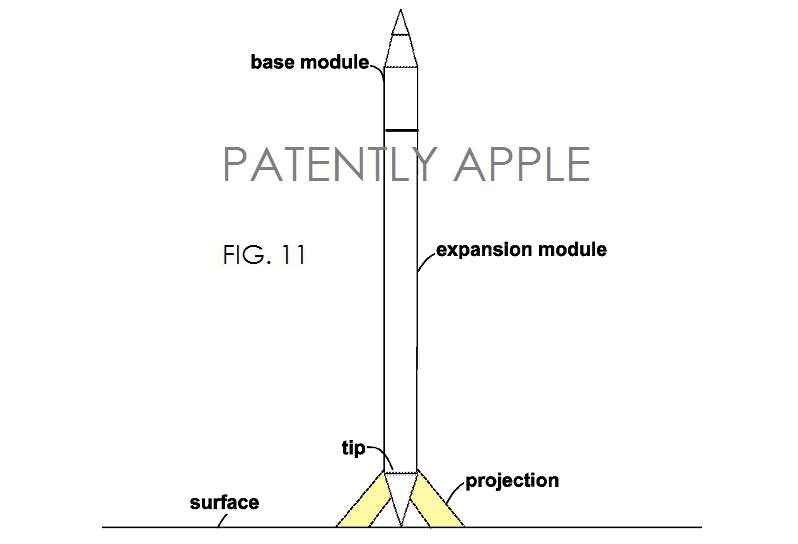 In Apple's patent FIG. 6 noted below we're able to see an expansion module for providing camera functionality. The unit could be used to take or store pictures. The wireless communication circuitry associated with the module could be used to transmit image data from the camera to a remote computing device, such as a desktop, laptop, tablet, or the like via Bluetooth, Wi-Fi, 3G or 4G cellular technologies. 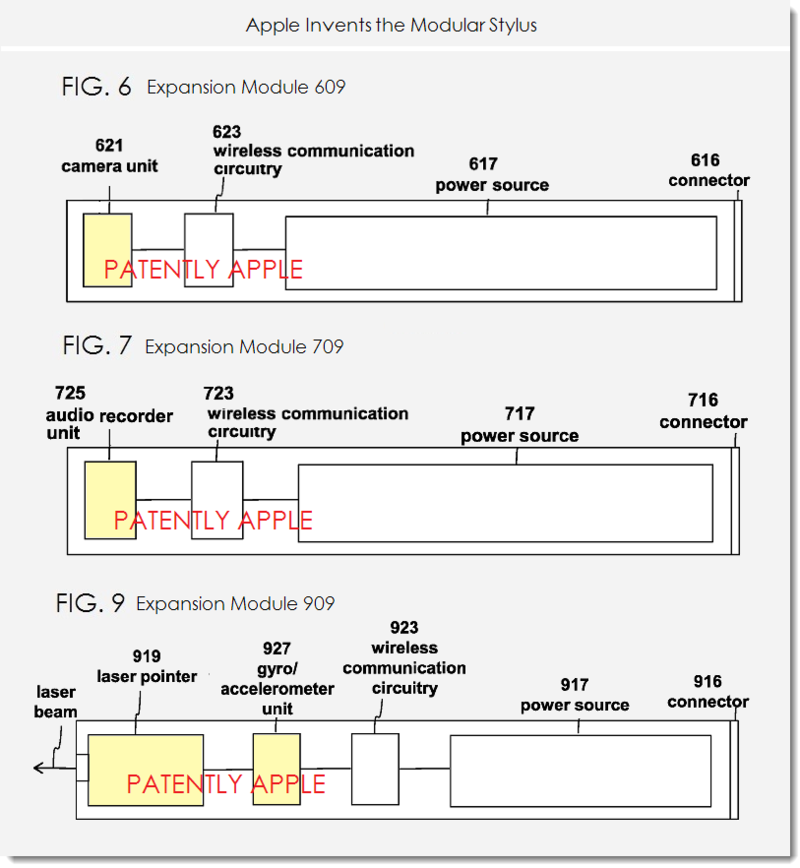 Apple's patent FIG. 7 noted above illustrates a block diagram of another exemplary expansion module #709 for providing audio recording functionality. The Audio recorder could further include a speaker for playing back the recorded audio data. Additionally, the expansion module could further include one or more push buttons, switches, or other input devices to allow the user to do one or more of record, stop, play, fast forward, and rewind. As with camera module, users will be able to transmit the recorded audio data to a remote computing device be it an iMac, MacBook, iPad or the like.

Apple notes that attaching the expansion module 709 to base module will advantageously allow a user to make audio recordings of a meeting or oral notes and then enter them into a touch sensitive device, such as a tablet computer, using the same device.

Apple's patent FIG. 9 noted above illustrates that this module could combine a laser pointer feature (as we earlier covered) with a gyro/accelerometer which could be used to supplement the position data of the stylus tip determined by the touch sensitive device. For example, in a drawing application, the tilt of the stylus can be used to adjust the shape and thickness of lines made by the stylus to more closely mimic that of an actual pen or paintbrush.

Apple notes in their patent filing that the gyro/accelerometer could also be used to detect motion in the form of stylus based air gestures. For example, a sweeping motion of the stylus would be able to be detected by the gyro/accelerometer and transmitted to a remote touch sensitive device. The in-air gestures made with the use of the stylus would be acknowledged as an input that could, for example, translate to a command of turning a page of a manual or book or to transition one presentation slide to the next. Apple also notes that in-air gestures could also act as a mouse replacement in certain instances.

Apple notes that power could be transferred from a power source to an attached base module via the connector. In some examples, the power source could include non- rechargeable batteries, such as alkaline, zinc-carbon, and the like, inserted into the body of expansion module.

Apple interestingly notes that the modular stylus in patent FIG. 14 can establish a data connection (e.g., USB) through the tip of base module having a first and a second segment with connections to USB D+ and USB D-. In fact, a future iPen may work with Apple future wireless charging system that's based on Near Field Magnetic Resonance.