On Thursday the US Patent & Trademark Office published a series of ten original patent applications from Apple. While there wasn't a single invention that stood out as a consumer oriented hit, there were a few that could be of interest to various niches within the Apple community. Today's report provides you with a brief overview of each of the ten patents and links to them for those wishing to explore them further. As the week ended, Patently Apple's ongoing patent research was able to uncover yet another hidden gem and our report shines a light on one specific new feature that Apple's engineers had worked on last year regarding transparent windows.

The following list includes ten original patent applications filed by Apple and published by the US Patent and Trademark office on January 09, 2014. The list doesn't include Apple's eight continuation patents that are usually just tiny tweaks made to patent claims.

One of the only patent applications that mildly stood out on Thursday was Apple's invention describing an actuator module for an iDevice camera. It further relates to the iSight's camera autofocus and auto image stabilization functionality found in Apple's new iPhone 5S. 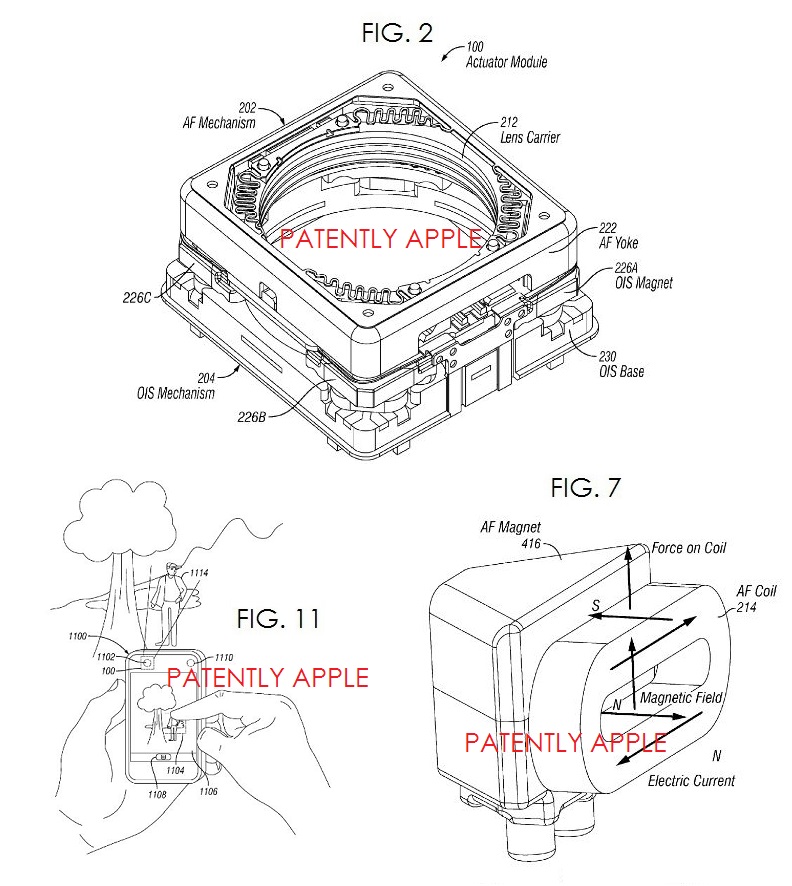 Apple's invention relates to techniques for automated measurement of relatively small capacitance such as the parasitic gate-drain capacitance in thin film transistors.

Digital resampling techniques are disclosed in Apple's invention that produce high-quality scaling of bitmap images with varying degrees of smoothness and continuity, along with an improvement in perceived detail in the resampled image.

Apple's invention generally relates to machining workpieces, and more particularly to methods, machining tools, machining apparatuses, and computer code for machining a workpiece in a single pass. It's an invention that relates to new machining processes for manufacturing the housing of such devices as the iPhone, iPad and Macs.

Method, Medium and System for an Integrated Application Store for a User Device

Apple's invention generally relates to methods for suspending devices that may be connected to a host electronic device, and more specifically, to suspending connected devices, which are determined to be idle, to achieve greater power savings.

Earlier today we presented a new hidden patent relating to flexible displays in relation to possible future foldable devices. In this report we point to another hidden gem describing flexible and transparent displays that could be formed from a flexible display substrate such as an organic light-emitting diode display (OLED) substrate or other display layers.

Apple notes in their patent filing that the electronic device illustrated below in patent FIG. 18 may be provided with one or more transparent window portions. Window #130 may be formed by creating transparent window regions in the front and rear surfaces of the device. The rear window opening may, for example, be formed from a clear glass plate or other transparent structure. 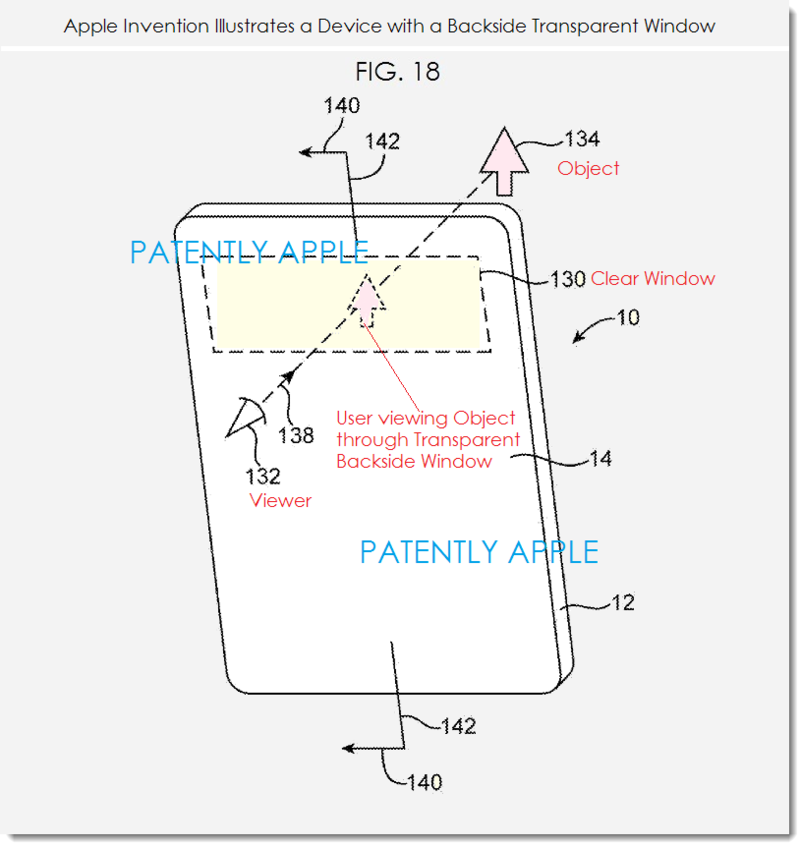 Although Apple provides an "illustrative" device for the purposes of describing the backside window opening, the device could end up being "a portable computer, a tablet computer, a computer monitor, a handheld device, global positioning system equipment, a gaming device, a cellular telephone, portable computing equipment, or other electronic equipment."

It's a little difficult to envision the added backside transparent window on an iPhone, so it's likely for the category that Apple lists as "other electronic equipment" which raises our curiosity as to what that could be.

According to Apple, "During operation of a device such as device #10 of FIG. 18, a user (depicted as viewer #132 of FIG. 18) may view an object such as object #134 by looking through window #130 in the direction noted as #138. The display (#14) may have display pixels that are located within the window. These pixels may be activated as a user views an object through the window to form a heads-up display in which an image is displayed by the display pixels while the external object is simultaneously visible to the user of device.

To learn more about Apple's patent filing that was originally filed with the US Patent Office back in Q4 2011 and published in Q2 2013 under the names of Apple engineers alone, review Apple's invention.