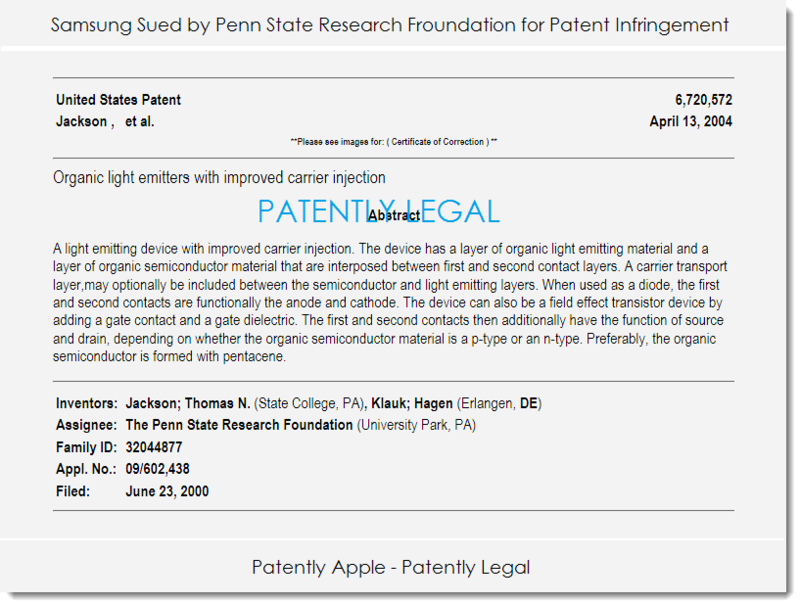 More specifically, they allege that Samsung's Galaxy SIII, the Galaxy S4 and similar products continue to infringe upon their intellectual property.

The Penn State Research Foundation's complaint further notes that the "Defendant Samsung Electronics Co., Ltd. has known of the '572 patent since at least May 12, 2010 when its own patent application number 7,863,628 was rejected under 35 U.S.C. § 103(a) as unpatentable over the '572 patent.

The Penn State Research Foundation is seeking a "reasonable royalty" from Samsung should they be found guilty of patent infringement.

The patent infringement case presented in today's report was filed in the Pennsylvania Middle District Court, Williamsport Office. The Presiding Judge in this case is noted as being Judge Matthew W. Brann.

Patently Apple presents only a brief summary of certain legal cases/ lawsuits which are part of the public record for journalistic news purposes. Readers are cautioned that Patently Apple does not offer an opinion on the merit of the case and strictly presents the allegations made in said legal cases / lawsuits. A lawyer should be consulted for any further details or analysis.