In June 2013 Patently Apple reported on both Apple and Motorola looking to introduce device authentication systems for mobile devices. While Apple's Touch ID has since come to market with their new iPhone 5S, Motorola is still working on their own system. One of Motorola's more intriguing authentication system options includes the use of a consumer applied electronic skin tattoo. Motorola first openly discussed this system with Walt Mossberg during their annual D11 conference held in May of 2013 or just weeks prior to Edward Snowden's NSA spying revelations. All of sudden, Motorola's e-skin tattoo authentication system doesn't seem to be as innocent as first thought, especially in light of a bizarre admission that we found in a Motorola patent application published by the US Patent Office.

Motorola's invention relates to a system for providing auxiliary voice input to a mobile communication device or "MCD." The system comprises an electronic skin tattoo capable of being applied to a throat region of the body (see patent FIG. 3 below) or embedded in a collar or band that would be worn around the throat a user. The collar or band may be flexible or stiff.

The idea is to unlock a user's mobile device display with only the use of their voice that is monitored by an electronic skin tattoo that could recognize the owner's voice pattern, or surpassing a certain frequency threshold. For example, a certain word can be spoken that will enable the display to illuminate when the electronic skin tattoo senses the pattern or frequency corresponding to the spoken word or utterance. In the same vein, a motion of the throat muscle or tissue may also cause the display to light.

The electronic skin tattoo can include an embedded microphone; a transceiver for enabling wireless communication with the MCD; and a power supply configured to receive energizing signals from a personal area network associated with the MCD.

Further, the system includes a controller which is communicatively coupled to the power supply. The controller can be configured to receive a signal from the MCD to initiate reception of an audio stream picked up from the throat region of the body for subsequent audio detection by the MCD under an improved signal-to-noise ratio.

While reading Motorola's patent, we discovered a very bizarre entry as follows: "Optionally, the electronic skin tattoo can further include a galvanic skin response detector to detect skin resistance of a user. It is contemplated that a user that may be nervous or engaging in speaking falsehoods may exhibit different galvanic skin responses than a more confident, truth telling individual."

What is this entry doing in a consumer friendly invention? Could this aspect of the technology be representing a next generation lie detector apparatus? Could this technology be for military interrogations? Is this a possible tool for the police or other governmental agencies? However this ends up being used in the market, its potential for un-friendly applications is rather high.

Overview of the E-Tattoo System

In Motorola's patent FIG. 1 shown below we're able to see a block diagram of an example system comprising an electronic tattoo (#110) and a mobile communication device (MCD - # 120) that are communicatively coupled. The electronic tattoo, which can be applied to a region of the body via an adhesive, is further comprised of a controller, a personal area network (PAN) transceiver, audio circuitry, a power supply and a signal processor. 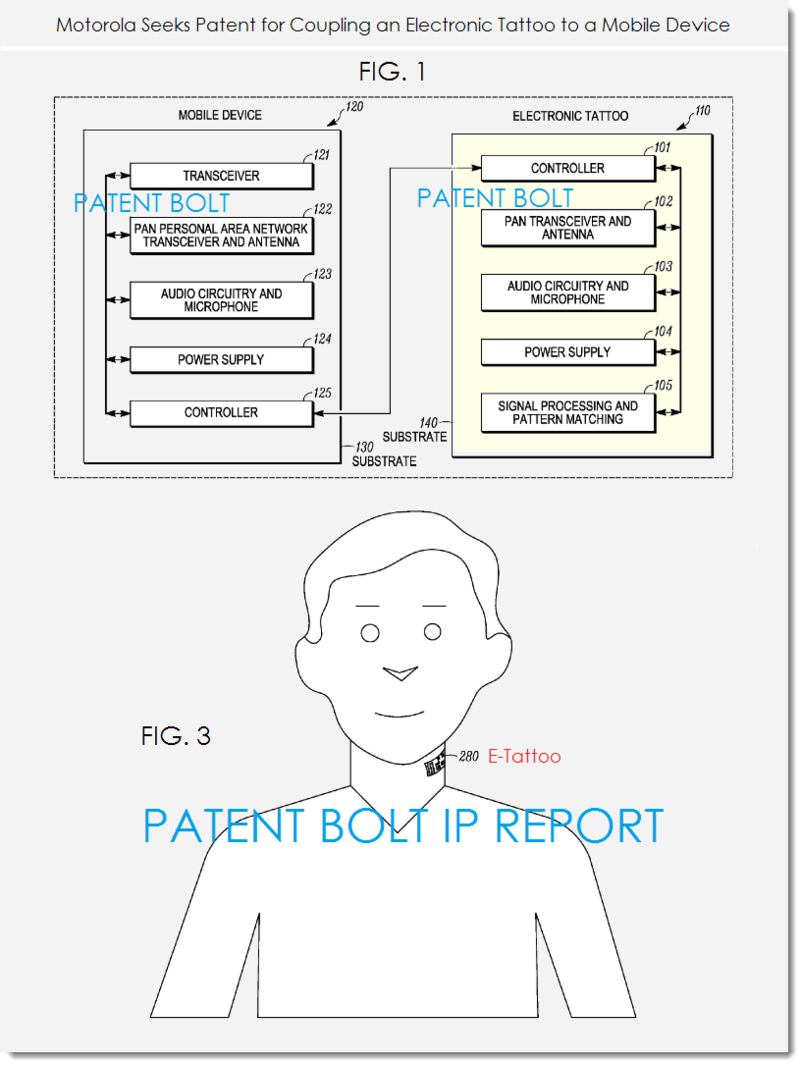 A power, such as a rechargeable battery, supply provides electrical power to several electronic components of MCD. The power supply could also employ solar panel technology, capacitive technology, nanotechnology, or electro-mechanical technology, for example, as a means to generate and distribute electrical current.

Overview of the Physical E-Tattoo 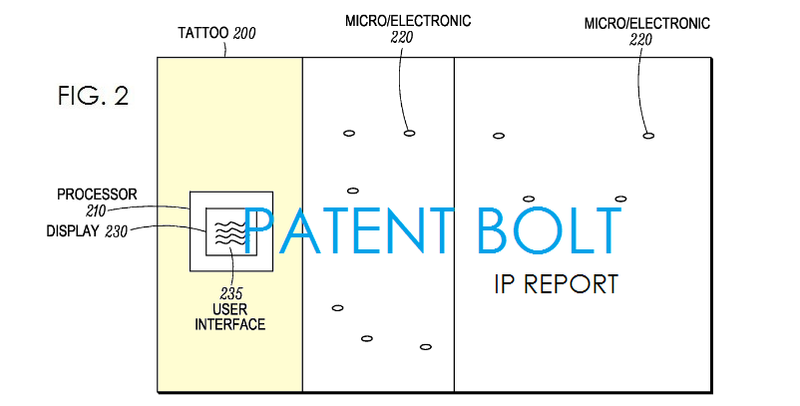 In light of another law enforcement-related patent about next-gen handcuffs, it appears that the government is contemplating some rather sophisticated tools in the near future to contain unruly citizens.

Motorola goes on to state that "It is also contemplated that the display may be instructed by processor to illuminate visually upon the electronic skin tattoo meeting a criteria, recognizing a voice pattern, or surpassing a frequency threshold, for example. That is a certain word can be spoken that will enable the display to illuminate when the electronic skin tattoo senses the pattern or frequency corresponding to the spoken word or utterance. In the same vein, a motion of the throat muscle or tissue may also cause the display to light."

At the beginning of their patent filing Motorola states that the "invention relates to a system for providing auxiliary voice input to a mobile communication device or "MCD." Yet what is being described for FIG. 2 appears to pertain to a display on the tattoo itself. Perhaps it's for both applications. Could it mean using the display to present a number assigned to a prisoner, a citizen? Could it have medical applications? The depth of use isn't explored in the patent filing but it definitely has extensive application potential for both good and evil intentions.

How Motorola Envisions the E-Skin Tattoo

This past June Motorola got a lot of buzz out of the All Things D11 Conference talking about authentication skin tattoos and more. Some of what they discussed was interesting. 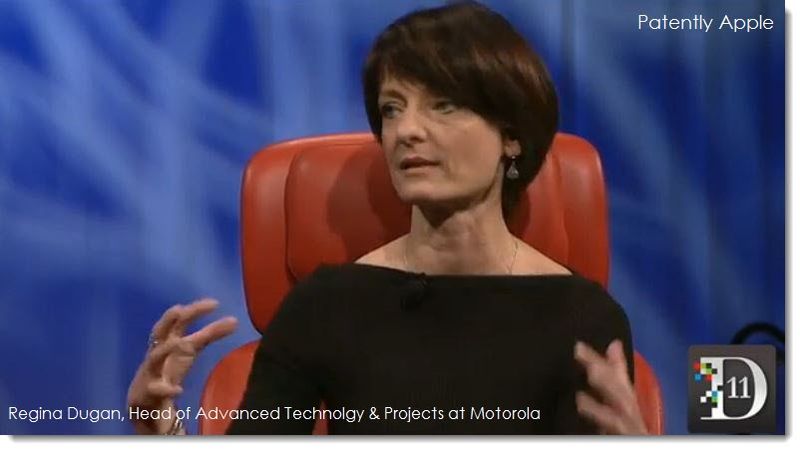 Dugan told Walt Mossberg that "We're thinking of a whole variety of options for how you could do better at authentication." Dugan added that "you could also think about a means of authentication that you could simply wear, on your skin, every day for a week at a time. Say like an electronic tattoo."

Dugan further noted that the inventor of the e-skin tattoo was a researcher at the University of Illinois by the name of Doctor Rogers. Dugan stated that "What he discovered is that he could standardize CMOS techniques to make islands of high performance silicon connected by accordion like structures that will allow it to stretch up to 200 percent and still be performing. And what he did was founded a company. They started making electronic tattoos. I'm wearing one on my arm [as noted in our cover graphic]. This is a developmental system made by MC10. And it has an antenna and some sensors embedded in it. What we plan to do is work with them to advance a tattoo that could be used for authentication.

Later in her conversation with Mossberg she stated that "Now, it may be true that 10 to 20 year olds don't want to wear a watch on their wrist (a reference to a statement made by Apple`s CEO Tim Cook on the opening night of D11 regarding an electronic device like a watch), but you could be sure that they'll be far more interested in wearing an electronic tattoo, if only to piss off their parents, right?" – (Which had the audience burst into laughter.)

While the authentication e-skin tattoo seemed innocent at the time, the patent application's detailing definitely has a few potentially unfriendly applications, especially in light of Dugan's connection to DARPA as the 19th Director of the Defense Advanced Research Projects Agency, the research arm of the Pentagon.

It's kind of creepy thinking that it may be the Pentagon that actually wants the e-skin tattoo to be experimented with in the consumer space with young people. It's very difficult to not think skeptically upon such developments in light of Edward Snowden's revelations about classified NSA documents which revealed operational details of a global surveillance apparatus run by the NSA, its Five Eyes partners, and numerous commercial and international partners. That wasn't on the minds of most citizens prior to this revelation and now it is.

While any technology being created in labs around the globe could be used for both good and evil, this particular application of an e-skin tattoo has to be one seen as having other motives beyond mere authentication as it moves into the territory of the tattoo being able to determine if the user is "engaging in speaking falsehoods." Sure, that's a "normal" activity of a consumer device, right? Hmm, I don't think so. It sounds more like 1984's Big Brother theme of State surveillance by any means.

Then again, you might see this development in a softer, kinder light. Though with recent news of the FBI being able to tap into Mac owner's iSight camera and rumors of backdoor activiiy by the NSA on iPhones, the public is growing far more skeptical than in the past and understandably so. It's equally understandable that a patent about an authentication system drifting into the territory of "speaking in falsehoods" can raise an eyebrow or two. However you see it, send in your comments below.