This week the European Patent Office published one of Apple's patent applications for flexible displays filed in Korea. In further researching this and other related patent applications in the EU database we stumbled upon a hidden filing. Hidden filings are those filed by Apple's engineers under their individual names (usually as a team of engineers working on an Apple project) without listing Apple as the official assignee. This way the invention remains off the public's radar screen under "Apple Inc." until the very last moment when it's granted and Apple take's legal assignment of it at that time. Sometimes we're lucky to stumble onto one of these little gems before they're granted, and today we're going to review one of them that relates to possible future flexible display configurations that will allow a device to be folded in various configurations.

Apple filed a patent in Korea relating to flexible displays that was published by the EU Patent Office. We're beginning to see Apple filing more and more patents in Korea. Considering that Apple is in numerous legal battles with Samsung, it only stands to reason that Apple will want to file more of their strategically important inventions with the Korean Patent Office.

The patent that Apple filed was slightly different than one that we reported on back in September 2012 titled "Apple Looks to Flexible Displays for Unique Functionality" while sharing some common patent figures. The patent's history traced back to U.S. patent application 20120242588. It's one of those hidden patents that don't list Apple as the assignee as we noted in our opening summary, but is very much an Apple derived invention.

Digging further into the European patent office's database this week we were able to stumble upon yet another hidden Apple patent filing about flexible displays that we had never covered before. Today's report provides you with an overview of this invention.

Apple's invention relates to electronic devices that may contain multiple housing portions coupled together using hinges. The hinges may be based on a three or four-bar linkage, hinges with slotted members, hinges formed from flexible support structures and hinges based on flexible housing structures.

Apple provides us with a great number of flexible displays with hinge configuration examples as noted below.

In the first example noted below, we see Apple's patent FIG. 1 which is a foldable smartphone. Yet for the record, Apple makes it clear that it's "an illustrative electronic device" with a flexible display which technically could represent any one of the following devices: a laptop, tablet, a somewhat smaller device such as a wrist-watch device, pendant device, headphone device, earpiece device, or other wearable or miniature device, a cellular telephone, a media player, larger devices such as desktop computers, computers integrated into computer monitors, televisions, set-top boxes or other electronic devices. 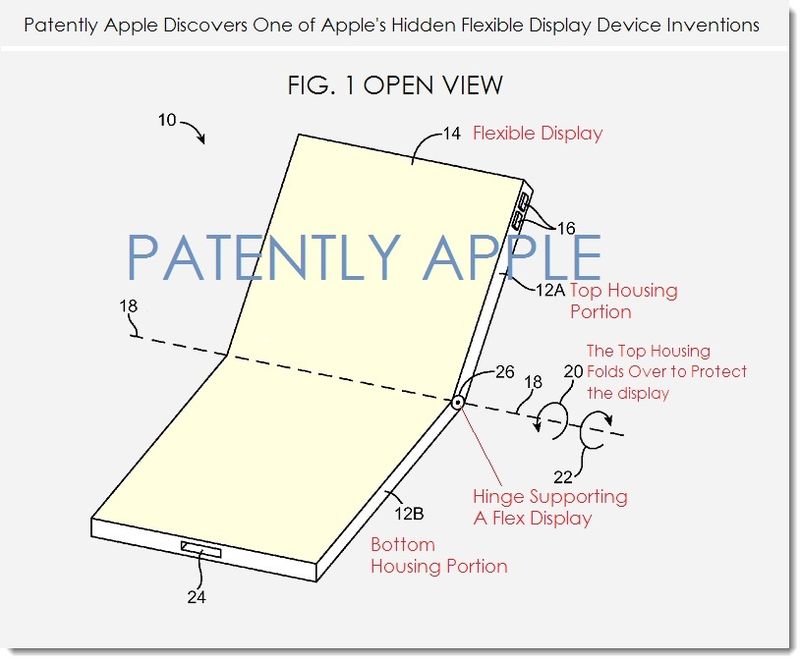 Further to Apple's patent FIG. 1, they note that hinge #26 (which is a key focus of this patent filing) may be based on a flexible material (e.g., a sheet of flexible polymer or metal) which could be implemented in a single or multi-shaft mechanism – or any other structure that supports rotational motion about a rotational axis to allow housing members to move relative to one another.

In the next graphic noted below we see a sequence of three figures. In the first we see Apple's patent FIG. 2 which illustrates a side view of a device with a flexible display and a hinge formed using a three-bar linkage arrangement in which the flexible display has been placed in a planar configuration; in the second, we see FIG. 3 illustrating a side view of a device in a closed face-to-face configuration. In the third, Apple's patent FIG. 9 is a side view of a device with a flexible display in a triangular configuration. Apple further notes that in this configuration it could either accommodate a two-person game or the use of two separate applications running at the same time. The very same gaming idea was recently echoed in a Samsung patent in a more elaborate illustration.

In the next graphic sequence we see four figures. In the first we see FIG. 10 illustrating a side view of a device with a flexible display having a hinge that is based on a four-bar linkage configuration; in the second we see FIG. 11 illustrating a side view of a device where the housing has been manipulated to place the display in a back-to-back configuration; in the third we see FIG. 22 which is another back-to-back configuration with a notable distinction. Instead of using a hinge mechanism, Apple notes that the engagement could use magnetic structures, hook-and-loop fasteners, hook and notch structures and/or other mating structures; in the fourth figure we see FIG. 24 that is a device in a tri-fold configuration with a two hinge construction. 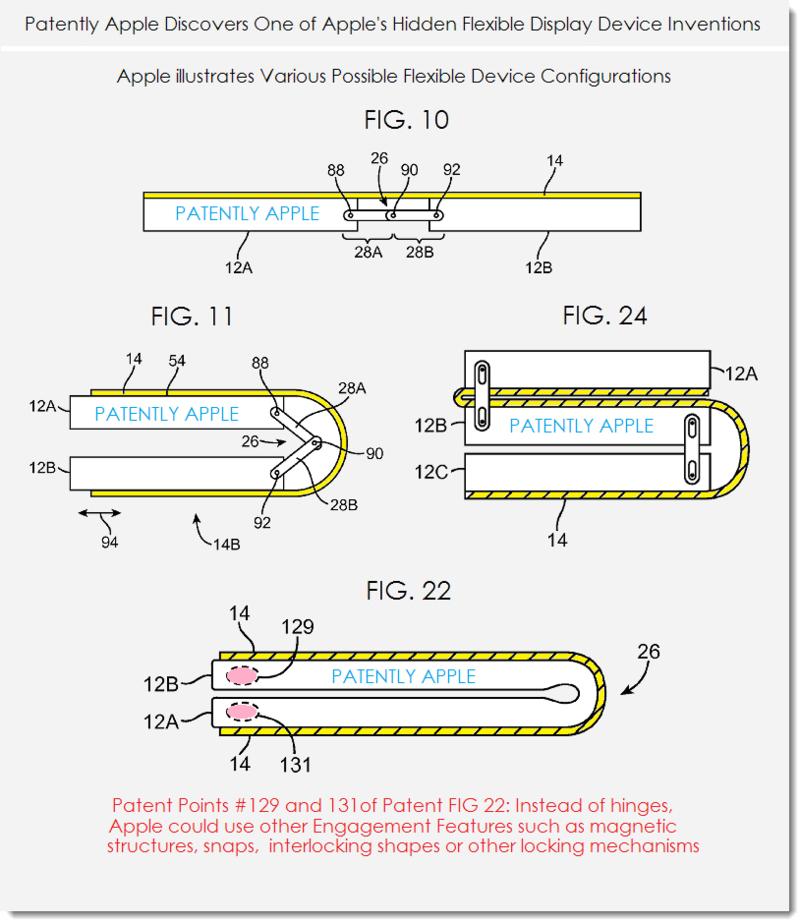 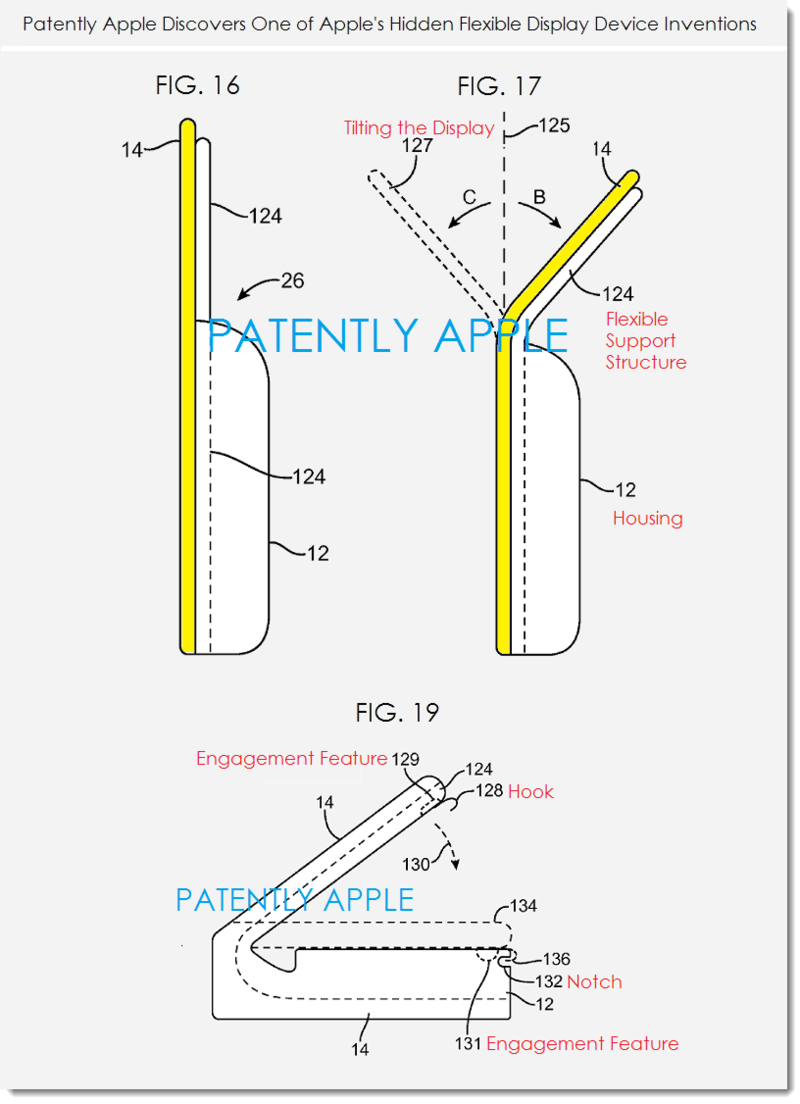 Apple's patent application was filed in Q2 2011 and published by USPTO under a group of Apple engineers in Q1 2013 under application 13/177165. With this representing Apple's sixth flexible display patent to date, we've now opened a new easy to access flexible display Archive.