In June 2013 there was a patent infringement lawsuit filed by Cellular Communications Equipment LLC against HTC, LG, ZTE, BlackBerry and Pantech. The patents in that suit which originated with Nokia and Siemens Networks were noted as being owned by Acacia, a patent licensing firm. Cellular Communications Equipment (CCE), a subsidiary of Acacia, is now setting their legal eyes squarely on Apple in a new lawsuit that includes the wireless carriers who redistribute Apple's iPhones (AT&T, Verizon, Sprint, T-Mobile USA and others.). Interestingly, four out of the five patents in this lawsuit are associated with essential patents used by the 3GPP member organization. In today's report we provide you with an overview of the lawsuit while providing you with all of the important links back to each of the patents noted in this case for the legal minds amongst us who wish to delve into each of the patent claims that are noted in all five counts against Apple.

In their First Count against Apple found in CCE's formal complaint before the court, they claim that Apple directly infringes upon patent 6,377,804 (A former Nokia Mobile Phones Ltd patent) titled "Mobile Communication Systems." Specifically, CCE points to Apple infringing patent claims 1, 3, 4, 5 and 7 and by selling he iPhone 5, iPhone 5c and 5s.

CCE additionally notes in their filing that "Defendants named in this Count know, and have known, that the Apple Devices include proprietary hardware components and software instructions that work in concert to perform specific, intended functions. Such specific, intended functions, carried out by these hardware and software combinations, are a material part of the inventions of the '804 patent and are not staple articles of commerce suitable for substantial non-infringing use." 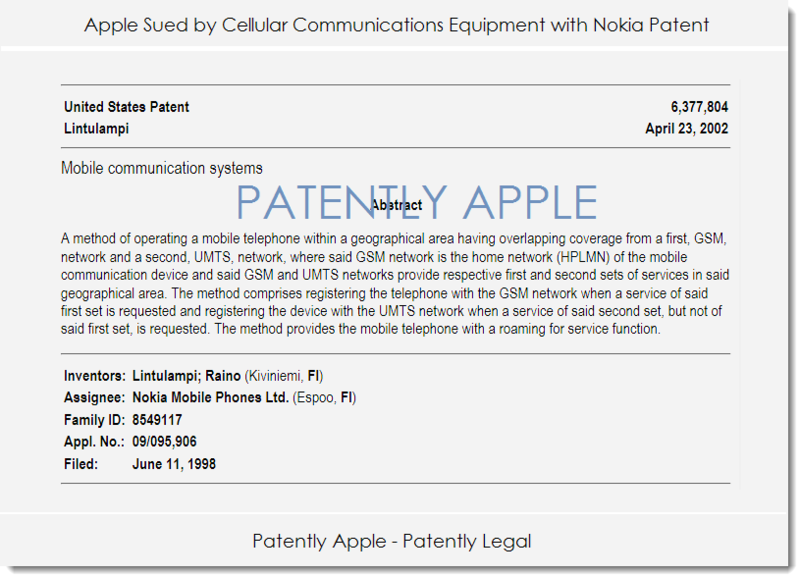 In their Second Count against Apple, they claim that Apple directly infringes upon patent 6,819,923, titled "Method for communication of neighbor cell information" (a former Nokia Networks Oy patent). In this count they claim that Apple's iPhone 4, the iPhone 4s, the iPhone 5, the iPhone 5c, the iPhone 5s, the iPad 2, the iPad (third generation) (a/k/a "the new iPad" or "iPad 3"), the iPad (fourth generation) (a/k/a "the iPad with Retina display" or "iPad 4"), the iPad mini, the iPad mini with Retina display, and the iPad Air infringe upon their patent." The next three counts against Apple claim the very same Apple devices as infringing their intellectual property.

In Count Two they interestingly note that "On information and belief, each Defendant is a 3rd Generation Partnership Project (or "3GPP") member organization, or is affiliated with a 3GPP member organization. 3GPP solicits identification of standard essential patents, and, through 3GPP, Defendants received actual notice of the standard essential patents at issue here. The '9923 patent is one such patent, and Defendants have known of the '9923 patent at least as early as April 2010, when it was disclosed to 3GPP via the European Telecommunications Standards Institute ("ETSI," an organizational member of 3GPP)."

In their Third Count against Apple, they claim that Apple directly infringes upon patent 7,215,962, titled "Method for an intersystem connection handover" (a former Siemens Aktiengesellschaft patent). They specifically claim that Apple devices, as noted above, infringe upon patent claims 1, 2, 11, 12 and 13 of the '962 patent. The further note that the "Defendants received actual notice of the standard essential patents at issue here," and have since December 2010.

In their Fourth Count against Apple, they claim that Apple directly infringes upon patent 7,941,174, titled "Method for Multicode Transmission by a Subscriber Station" (a former Nokia Siemens Networks GmbH & Co. KG patent). They specifically claim that Apple devices, as noted above, infringe upon their patent claims 1, 6, 9, 14, 18 and 19.

In their Fifth Count against Apple, they claim that Apple directly infringes upon patent 8,055,820, titled "Apparatus, system, and method for designating a buffer status reporting format based on detected pre-selected buffer conditions" (a former Nokia Siemens Networks Oy patent). They specifically claim that Apple devices, as noted above, infringe upon their patent claims 1, 4, 5, 7, 8, 9, 10, 12, 15, 16, 18, 19, 20 and 21.

Cellular Communications Equipment is asking the court to triple the damages against Apple should they be found guilty of patent infringement based on Apple's willful infringement. They're also seeking a reasonable, ongoing, post-judgment royalty.

The patent infringement case presented in today's report was filed in the Texas Eastern District Court, Tyler Office. The Presiding Judge in this case is noted as being Judge Leonard Davis.

A Note about the Nokia Patents

As we noted in our opening summary, Cellular Communications Equipment is a subsidiary of Acacia Technologies. In November 2012 Business Insider posted a report titled "Tech's 8 Most Fearsome 'Patent Trolls'" whereby they listed Acacia Technologies as the eighth most feared troll. They specifically stated in their report that "Inventors and patent owners hire Acacia to license their IP to corporations. Patent owners split the licensing revenue with Acacia."

The primary patents in this case are former Nokia patents. Interestingly in December 2013 the EU warned Nokia of not becoming a patent troll.

Yahoo! News reported at that time that "Europe's top regulator has warned Nokia not to try to become a "patent troll" after the Finnish company sold most of its cellphone-making business to Microsoft Corp. this year but retained its patent portfolio.

Joaquin Almunia said in a speech in Paris on Monday he had approved the $7.2 billion sale as not presenting problems on Microsoft's side, but there is a danger Nokia will now attempt to "extract higher returns" from its patent portfolio. "In other words...behave like a patent troll, or to use a more polite phrase, a patent assertion entity."

Almunia, in charge of competition at the European Commission, the executive arm of the European Union, warned he will open an antitrust case against the company if it attempts to take 'illegal advantage' of its patents."

With that in mind, is this new case against Apple using Nokia patents enough for the EU Commission to open an antitrust case against Nokia for being a patent troll? Or is hiding behind Acacia Technologies, one of the largest known patent trolls, a way to skirt the law? Only time will tell.