The case against Apple is based on patent 6,185,678 (the '678 patent) originally assigned to Trustees of the University of Pennsylvania and now owned by assignment by Rembrandt Patent Innovations. 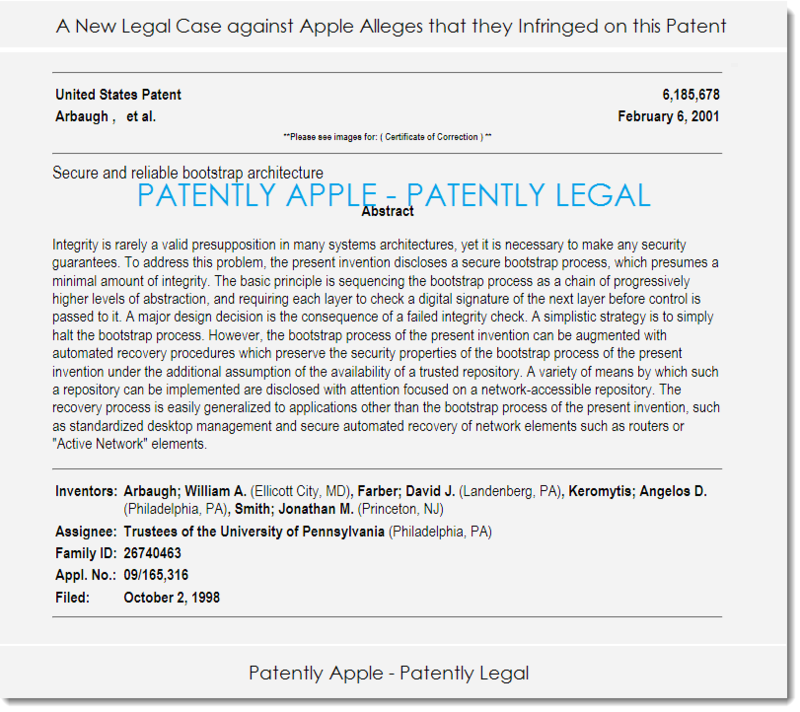 The complaint further notes that "The use of the Accused Products, when configured and operating as specified by Apple, infringe at least method claims 4 and 7 of the '678 patent.

In general, the technology at issue in the Accused Products relates to systems and methods for secure booting and recovery in an electronic device.

On information and belief, during the prosecution of Apple's own patents and patent applications, members of Apple's in-house legal team have met (both telephonically and in- person) with staff from the United States Patent and Trademark Office for the expressly stated purpose of discussing the '678 Patent and responding to rejections based upon the '678 Patent.

As a side note, one the leading characteristics of a patent troll or non-practicing entity is acquiring a patent for the sole purpose of suing a high profile company for gain, as they make no product of any kind themselves. On the surface, it would appear that the Rembrandt Companies fit that characteristic to the letter.

A 2011 study showed that Patent Trolls cost tech companies $29 Billion and a 2012 study made the case that patent trolling was out of control. In 2013, Apple remained the #1 Target of Patent Trolls.