According to a new IDC report published this afternoon, worldwide tablet shipments totaled 217.1 million units for the full calendar year 2013, which is up from 144.2 million units for the full year 2012 and represents a year-over-year growth rate of 50.6%. And despite gains made by Apple's competitors this year, they were still unable to unseat the king tablets: the iPad.

Tom Mainelli, Research Director, Tablets, at IDC stated in the report that "It's becoming increasingly clear that markets such as the U.S. are reaching high levels of consumer saturation and while emerging markets continue to show strong growth this has not been enough to sustain the dramatic worldwide growth rates of years past. We expect commercial purchases of tablets to continue to accelerate in mature markets, but softness in the consumer segment—brought about by high penetration rates and increased competition for the consumer dollar—point to a more challenging environment for tablets in 2014 and beyond."

IDC's report noted that Apple once again led the worldwide market for tablets, shipping 26 million units during the quarter, up from 14.1 million the previous quarter and 22.9 million in 4Q12. While the quarter represented the company's most successful on record, its year-over-year growth of 13.5% was well below the industry average. The numbers bring into focus the challenges the company faces as it attempts to grow its tablet business in markets outside of its traditional mature-market strongholds and in the face of continued success from competitors both large and small. 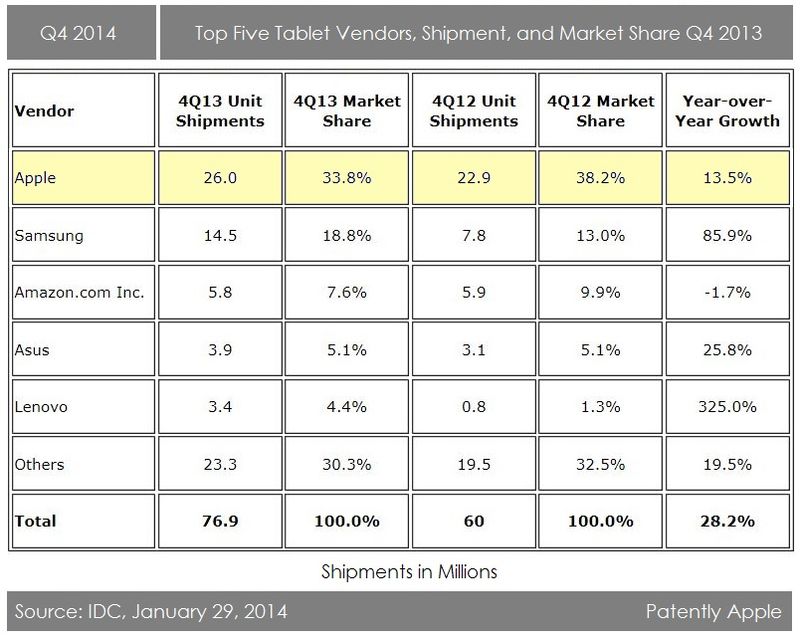 While the report noted that Apple saw its worldwide tablet market share for the quarter grow to 33.8%, up from 29.7% in the third quarter, it quickly noted that the iPad declined from its 38.2% share in the fourth quarter of 2012.

Spin the numbers as they will – Apple's iPad remains the number one tablet in the world, even at their premium price. More importantly, the iPad continues to squash their competitors in tablet web traffic usage in Canada and the US; a sign that iPad users actually use their tablets.