Apple Remained a Top Target for Patent Trolls in 2013

On December 5, 2013, The US House of Representatives overwhelmingly passed the "Innovation Act" bill aimed at discouraging frivolous lawsuits by patent holders. The move was backed by companies like Apple, IBM, Cisco and Google. House Judiciary Committee Chairman Bob Goodlatte won strong bipartisan support in passing by a 325-91 vote. At the time, Goodlatte stated that the bill "takes meaningful steps to address the abusive practices that have damaged our patent system and resulted in significant economic harm to our nation." In 2013 Non Practicing Entities (NPEs) filed a total of 3,134 patent lawsuits against global technology firms, up 18 percent from 2,652 cases tallied a year earlier, the data also showed. The latest statistics once again reveal that Apple remained one of the top targets of patent trolls in 2013.

While Apple and Google remained the top targets of patent trolls over the past years, it was telecommunications firm AT&T Inc. that topped the 2013 list with 51 patent rows with NPEs, up five notches from a year earlier when it was embroiled in 24 lawsuits. 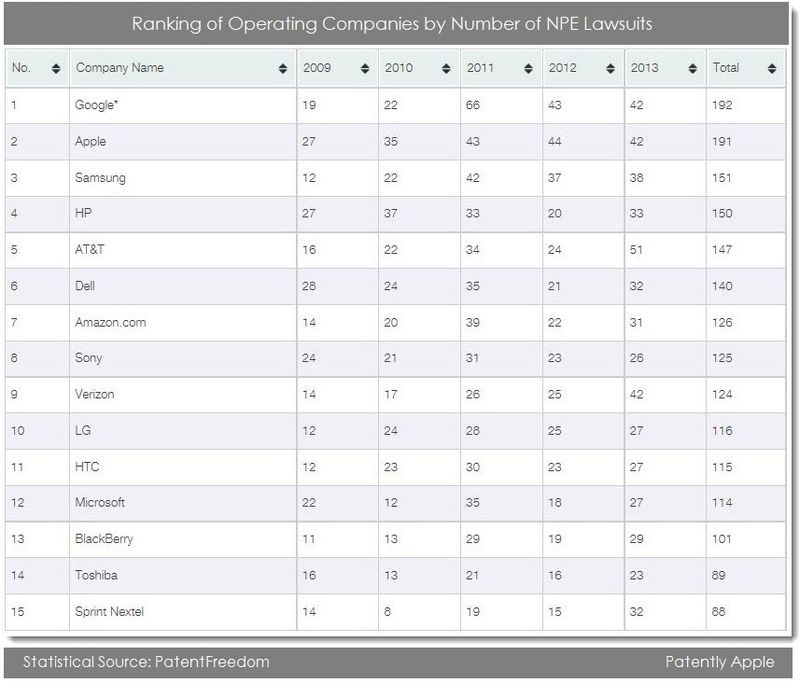 Verizon Wireless, another U.S. mobile carrier, ranked fourth on the list in 2013 with 42 patent rows, tying them with Apple and Google. Samsung ranked fifth.

Patent Freedom defines NPEs as entities that earn or seek to earn the majority of their revenue from licensing or enforcing patents. As of January 2014, over 750 distinct NPEs have been identified. Since 1985, these NPEs have been involved in litigation with over 11,000 different operating companies in over 12,000 actions, for a total of over 32,000 events.

Currently the FTC is examining the practices of patent trolls whose business model is primarily based on purchasing patents and then attempting to generate revenue by asserting the intellectual property against persons who are already practicing the patented technologies. The FTC is conducting the study in order to further one of the agency's key missions—to examine cutting-edge competition and consumer protection topics that may have a significant effect on the U.S. economy.