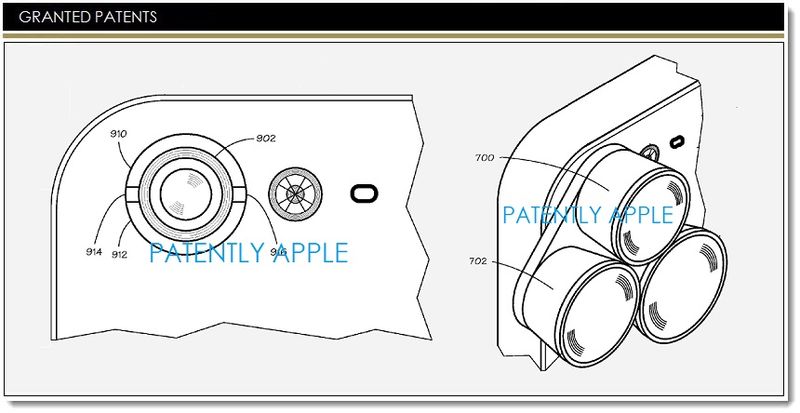 The US Patent and Trademark Office officially published a series of 31 newly granted patents for Apple Inc. today. In this particular report we cover a new camera related patent. In 2010 Apple introduced a clip-on accessory designed to provide iDevices with zooming capabilities. Today's granted patent goes far beyond that simple concept and introduces us to a vastly superior add-on camera lens system for iDevices that will use a magnetic mechanism. According to Apple, the movement of the lens assembly by the voice coil motor may provide various optical functions such as autofocus, lens zoom, anti-shake, or a combination of such functions.

Cameras are being added to multi-function devices such as computers and mobile telephones that do not provide the structures found in conventional cameras that provide only an image capture function. Multi-function devices are often thin, offering little room for the optical elements of the camera portion of the device. This has led to the development of extremely compact camera modules that provide increasingly sophisticated image capturing in a very small device. In turn, the availability of these small camera modules has resulted in the production of extremely compact and thin single function cameras that also lack the structures found in conventional cameras.

Regardless of the amount of miniaturization of these camera modules, there is a limit to the types of optics that can be provided in the space available in a multi-function device or ultra-compact camera. The optics for providing a telephoto lens and other specialty lenses require a certain length for their optical path, which often is unavailable within a small device. Further, users generally want to use a specialty lens intermittently. Therefore it is desirable to be able to change the lenses that are in the optical path to provide specialty optics when desired.

It would be desirable to provide a lens mount for an additional lens that works in conjunction with a lens provided by a camera module on a compact device.

Apple's invention relates to the field of camera lenses; and more specifically, to lens mounts for securing an additional lens in the photographic light path.

Apple's new camera system invention includes a housing with an aperture and an alignment feature surrounding the aperture to define an optical axis extending through the aperture.

Apple notes that a voice coil motor may support the moveable element of the lens assembly. A plurality of magnets is arranged on the camera module adjacent to the alignment feature to retain a detachable lens on the housing and engage the alignment feature to align the detachable lens with the optical axis. The plurality of magnets may be further arranged to minimize interference with the voice coil motor and movement of the moveable element of the lens assembly.

Apple's patent FIG. 1 illustrated below shows a portion of a compact device, such as a cellular telephone, that embodies the invention; FIG. 2 shows a section view of the device taken along section line 2-2 in FIG. 1; FIG. 3 shows an enlarged view of the camera module from FIG. 2. 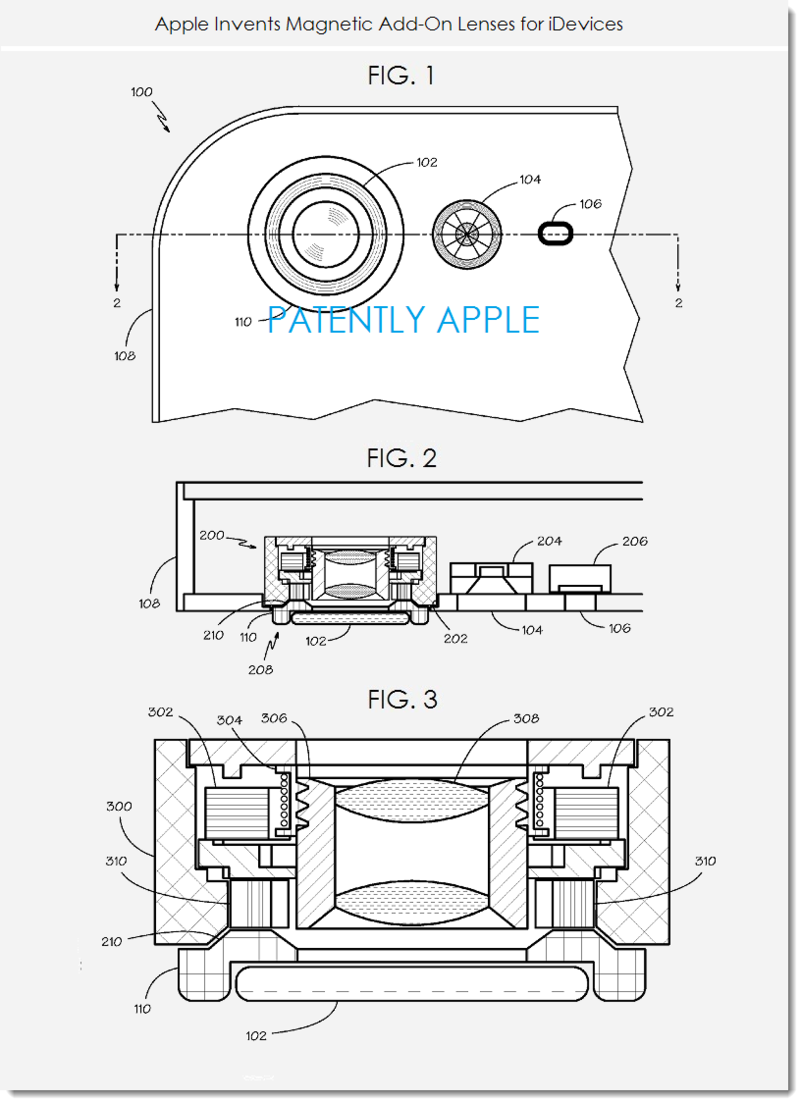 Apple's patent FIG. 4 illustrated below is an exploded view of a portion of a voice coil motor (VCM); FIG. 5 is an assembled view of the portion of the VCM shown in FIG. 4; FIG. 6 is a cross-section view of a detachable lens mounted outside the housing of the compact device. 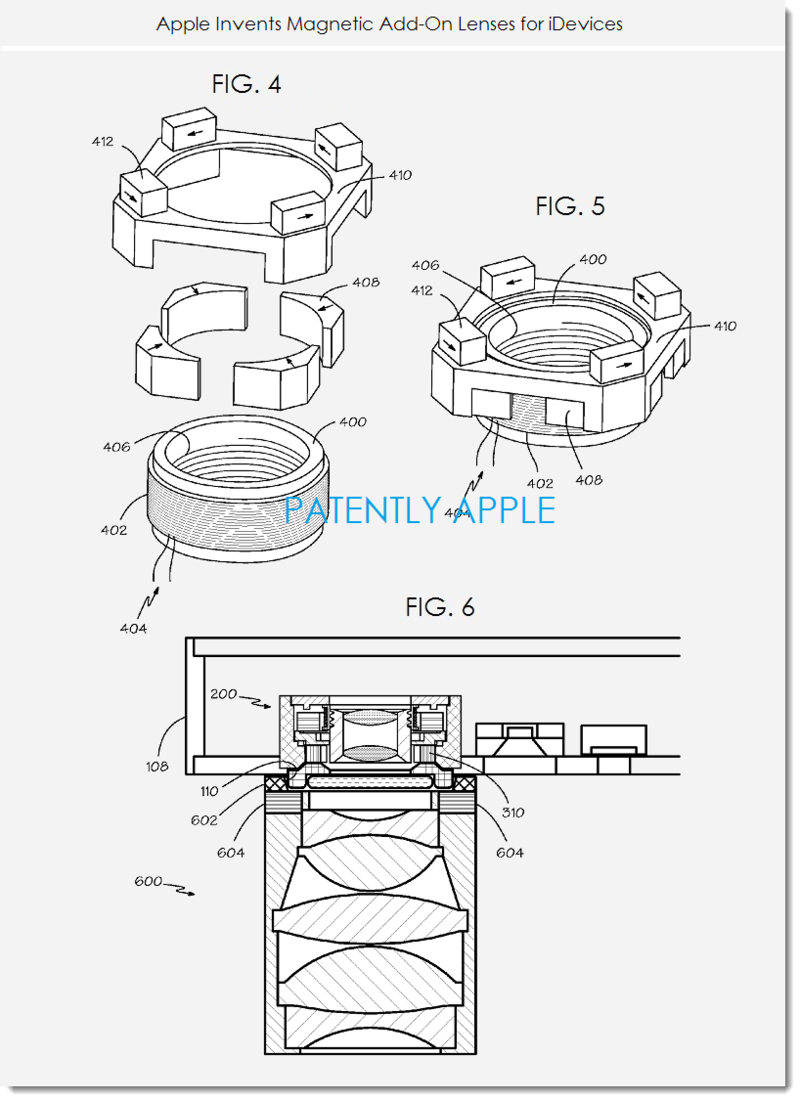 Apple's patent FIG. 7 is a pictorial view of a camera system that includes one or more additional lenses coupled to a detachable lens; FIG. 8 is a cross-section view of another detachable lens mounted outside the housing 108 of the compact device. 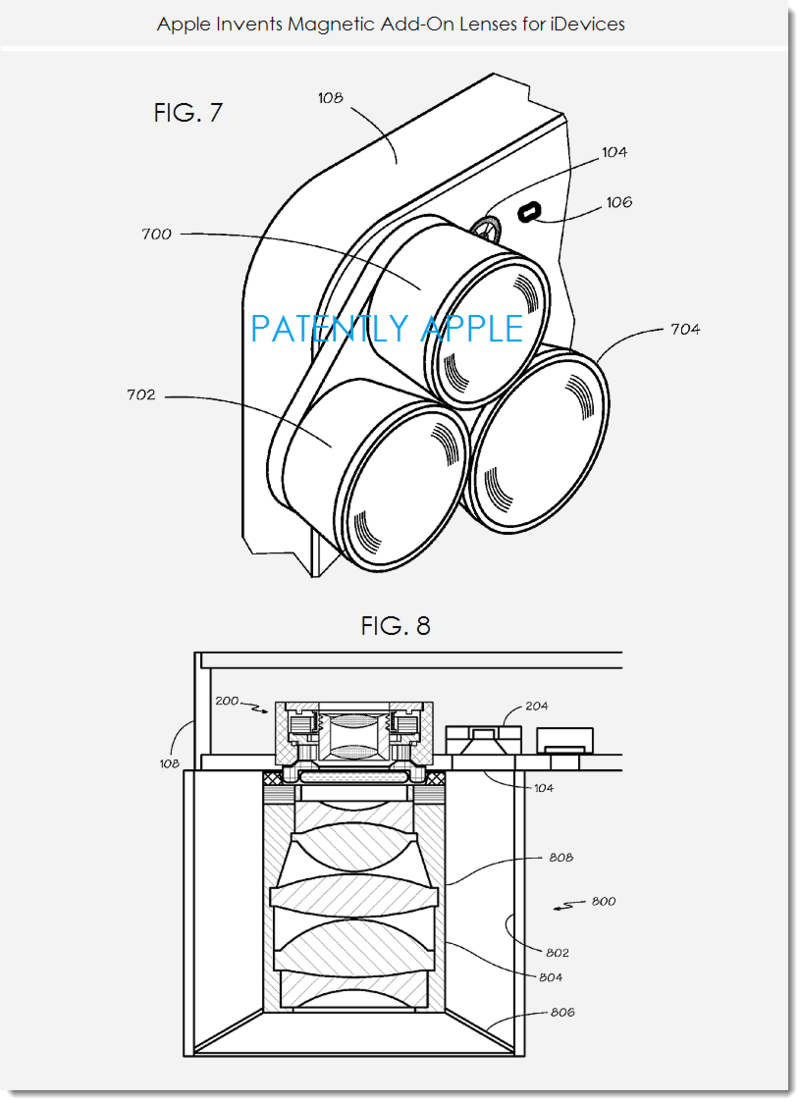 Apple's patent FIG. 9 below shows a portion of another compact device, such as a cellular telephone, that embodies the invention; FIG. 10 is a pictorial view of a camera system that includes a detachable lens that lies along the housing of the compact device; FIG. 11 shows a section view of the detachable lens and the housing taken along section line 11-11 in FIG. 10. 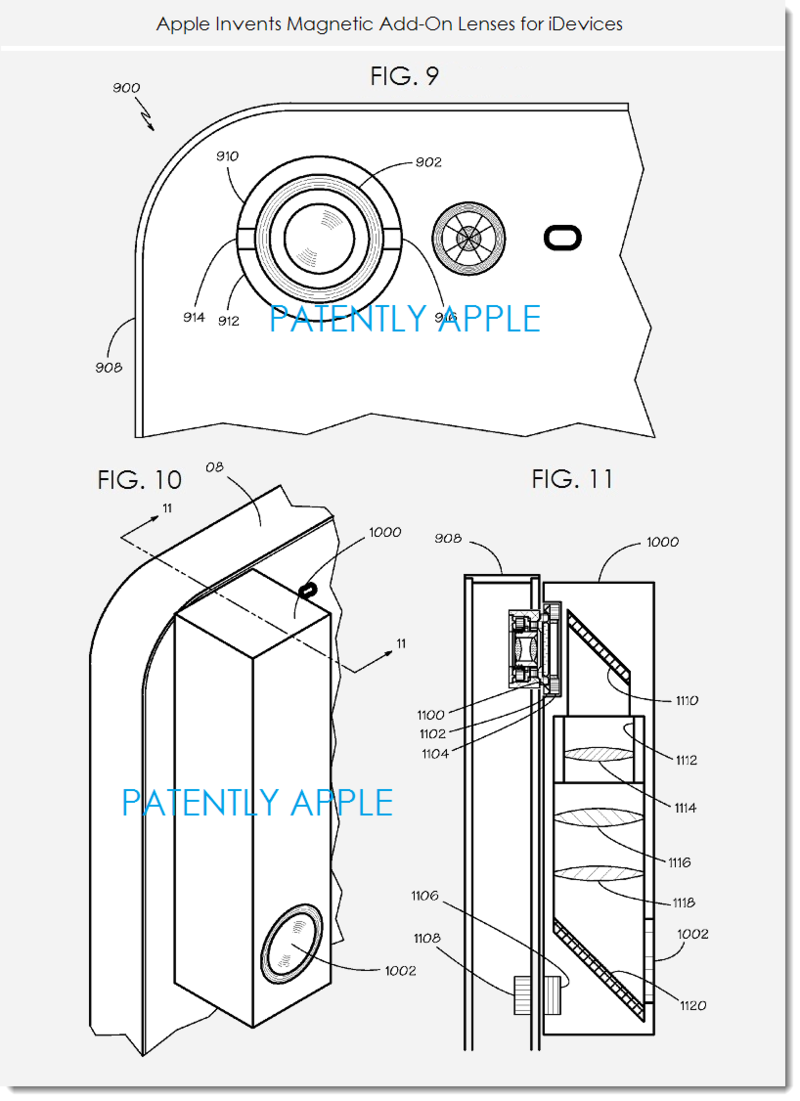 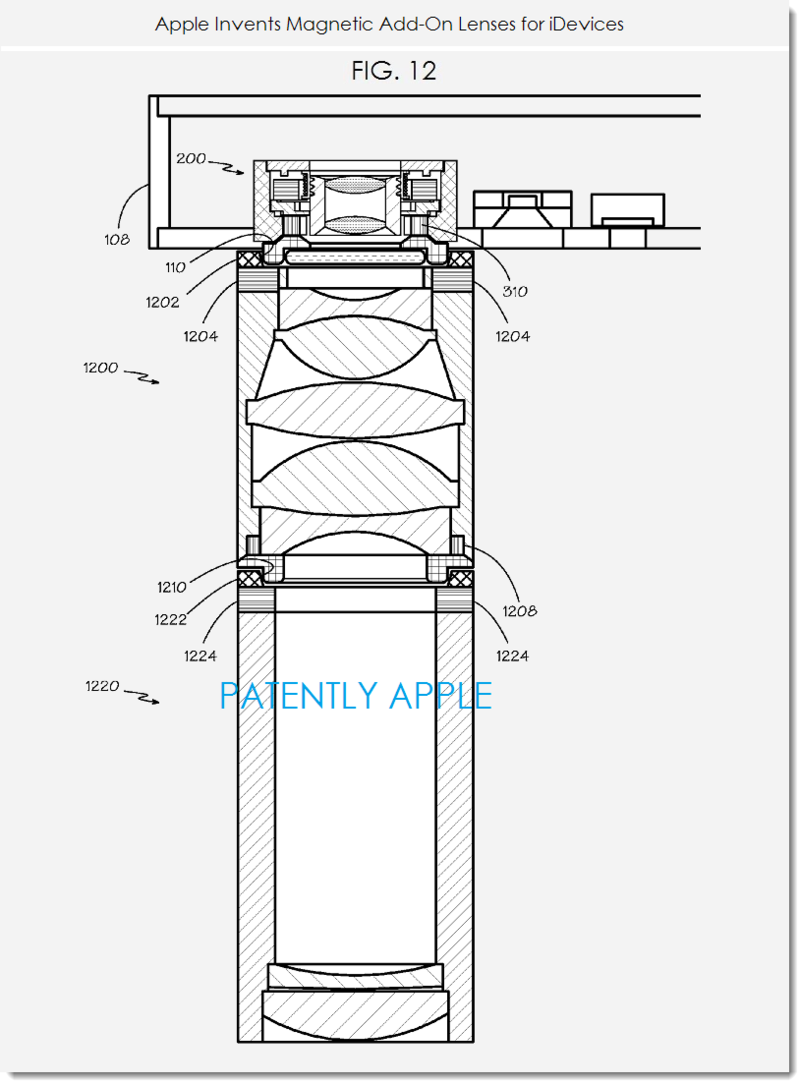 Apple credits Jeffrey Gleason and Misha Scepanovic as the inventors of granted patent 8,639,106 which was originally filed under in Q4 2012. To review today's granted patent claims and details, see Apple's patent.

It should be noted that Apple was granted another camera lens related patent today under number 8,638,369. To check out the specifics of that patent, you could review our original patent report titled "Apple Invents Device with Removable Back Panel Optical Options."