Apple has filed many SIM Card related patents over the last three years with the last one surfacing in October 2013. Yesterday, the US Patent & Trademark Office published yet another SIM Card Tray redesign with an emphasis this time on a thinner design form factor for future devices such as an iPhone, a MacBook and/or one that is wearable.

To enhance the use of electronic devices (e.g., cellular telephones), ejectable component assemblies may be used to couple removable modules (e.g., subscriber identity module ("SIM") cards) to the device. Some known ejectable component assemblies for personal electronic devices include a tray for receiving a removable module, and a connector coupled to a top surface of a circuit board within the housing of the device for receiving the tray as it is inserted through an opening in the housing. The connector may retain the tray such that contacts of the module may be electrically coupled to the circuit board. However, stacking such a connector above the top surface of the circuit board may limit the reduction in size of such electronic devices.

Apple's new SIM card tray assembly design differs from the one that was just presented back in an October in several ways as highlighted in yellow below. In some embodiments, there is provided an electronic device that may include a housing having an opening. The electronic device may also include a circuit board having a top surface, a bottom surface, and a pocket through the top surface that may expose a middle surface of the circuit board between the top surface and the bottom surface.

The electronic device may also include a cover coupled to the circuit board, and a removable module operable to be inserted through the opening and into a space between the cover and the circuit board, where a portion of the space is within the pocket. 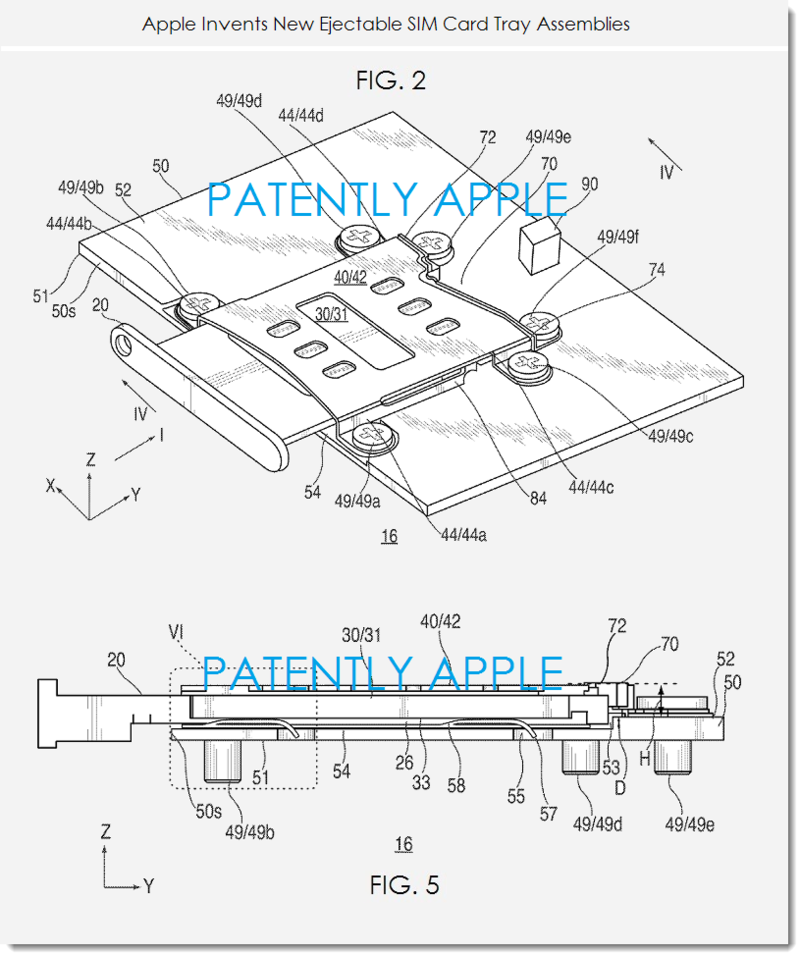 The ejectable component assembly may include any suitable assembly operative to insert and eject a removable module from a device. The removable module may include, for example, any suitable type of integrated circuit card ("ICC"), chip card, memory card, flash memory card, microprocessor card, smart card, such as a subscriber identity module ("SIM") card (e.g., a mini-SIM card or a micro-SIM card), or combinations thereof.

The thinner designed tray may be formed as a single unitary component from any suitable material, such as plastic, glass, metal, ceramic materials, epoxies, composite materials, or the like.

A thinner "glass" SIM Card tray will be able to support a future iWatch-like device or an iPhone with a flexible glass display which was revealed in a recent patent application.

Apple credits Michael Wittenberg, Miguel Christophy and Shayan Malek as the inventors of patent application 20140029206 which was originally filed under in Q3 2012.