It was reported yesterday that GT Advanced, Apple's manufacturing partner for its new sapphire glass plant in Mesa, Arizona, began advertising job openings at the new plant that will produce sapphire materials that will cover iDevice cameras and Apple's Touch ID Home Button feature. In March we were first to note that Apple may shift to sapphire crystal for future iDevice display covers. Then in September 2013 we posted a report about a new fusion process for adding a sapphire laminate layer to future iDevice cover glass as well as wearables. In December 2013 Apple revealed future iDevices could use flexible sapphire displays created with a sophisticated liquid-metal process. In today's published patent application, Apple once again confirms that iDevices will use sapphire for future iPhone displays and beyond.

Certain materials may present interesting issues when attempting to mechanically couple the material with another material. For example, when attaching two different materials together, there is a risk that the attachment technique may not be effective. This may be especially true when the two materials have different characteristics such as thermal coefficients of expansion, stiffness and so forth. Sapphire, for example, may be particularly difficult to mechanically couple with other materials. Specifically, machining sapphire may be difficult due to its crystalline structure, hardness and strength. Further, sapphire may have a high level of stiffness relative to other materials, as well as a relatively low level of thermal expansion. As such, conventional adhesive attachment techniques may not be effective or lasting. That is, mechanical strain on the adhesive bond resulting from the difference in the thermal expansion and stiffness of the materials eventually causes failure of the bond.

Another embodiment may take the form of a method including creating an attachment feature in a sapphire substrate and coupling the sapphire substrate into a mold. The method also includes forming a structure within the mold and removing the mold.

Still another embodiment may take the form of a device comprising a mechanical coupling between two materials. The device includes a first member having one or more attachment features. The attachment features are filled with one of a plastic or a metal. Additionally, the device includes a second member coupled to the first member by the plastic or metal. 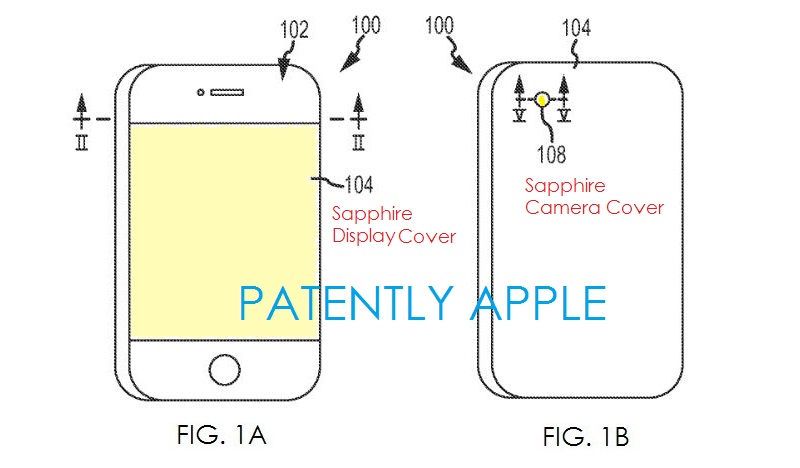 In Apple's patent FIGS. 1A and 1B we're able to see examples of an iPhone integrating transparent sapphire covers for both the face display and the backside camera.

In some embodiments, the transparent cover 104 may take the form of a sapphire sheet, a sapphire sheet with a glass laminate layer, a plastic, or other suitable material, through which a visual output of the device is output. Additionally, the cover may be configured to receive input from users via a capacitive sensor, for example. 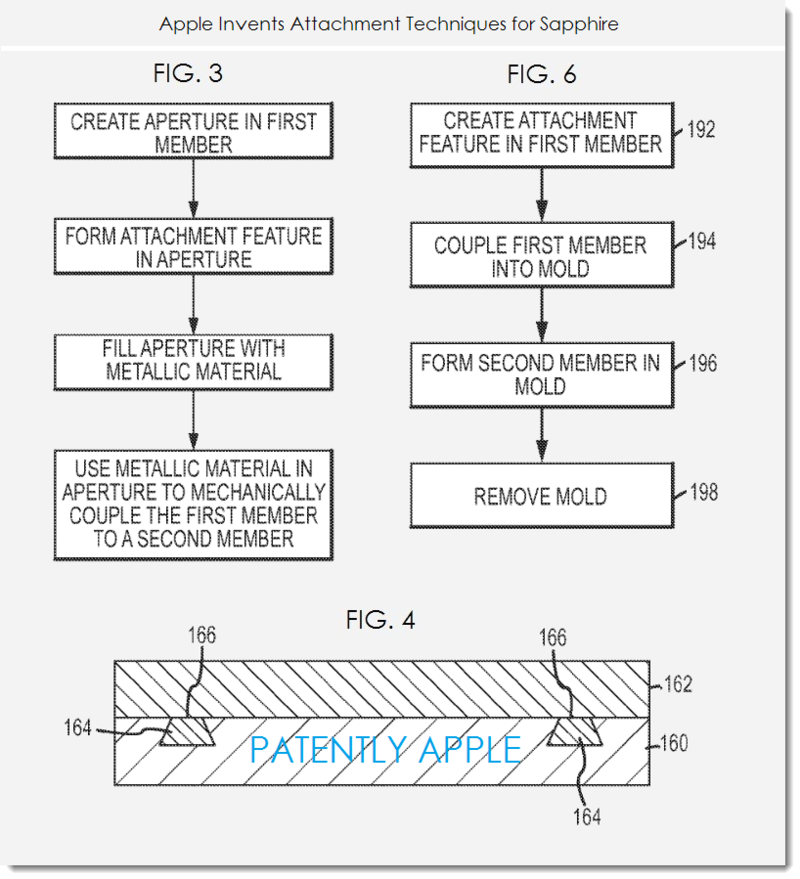