The US Patent and Trademark Office officially published a series of 41 newly granted patents for Apple Inc. today. In this particular report we cover patents that relate to possible future OLED and interactive augmented reality displays, a 3D modeling app for iDevices and sensor fusion. 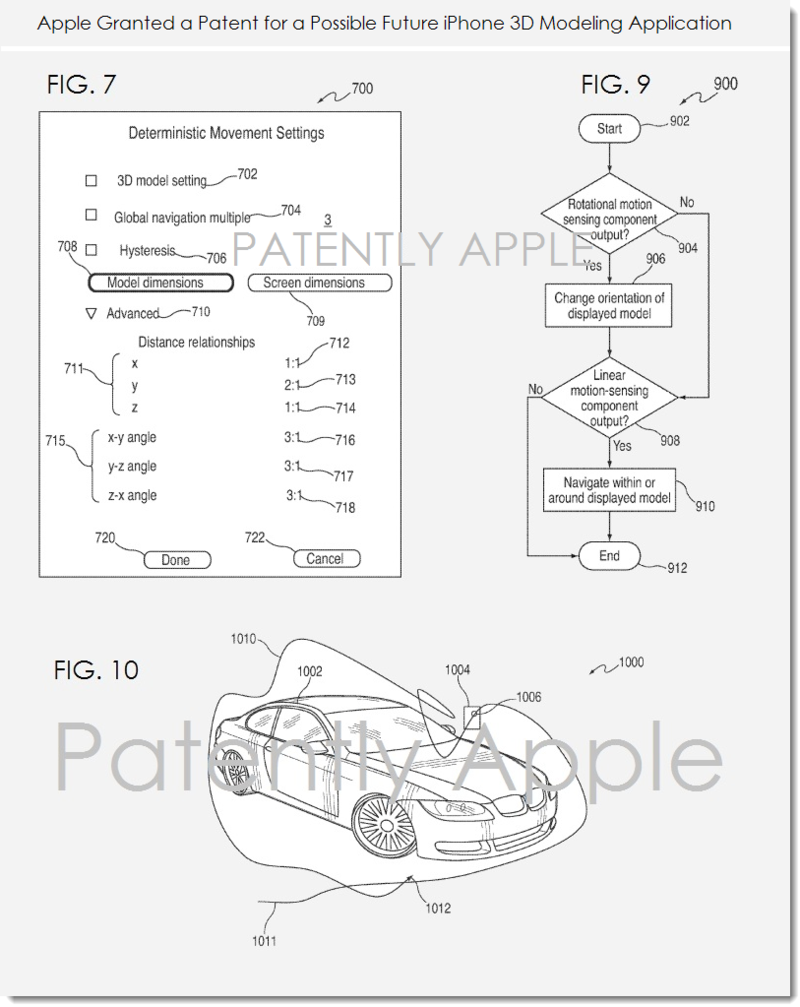 In some embodiments, a user could direct an iDevice such as an iPhone to display information that could be associated with three-dimensional navigation such as, for example, three-dimensional models of environments or objects.

For example, a user will be able to direct an iDevice to access a mapping application that provides images of what could be seen in some or any direction from a particular location.

As still another example, a user will be able to direct a future iDevice to display a three-dimensional object (e.g., an object for sale) that the user could manipulate or view from different angles.

Apple credits Richard Tsai, Andrew Just and Brandon Harris as the inventors of granted patent 8,624,974 which was originally filed in Q3 2012 and published today by the US Patent and Trademark Office.

Apple has been granted a patent today for their invention relating to portable electronic devices. More particularly, the present embodiments describe use of multiple sensors in combination to confirm a status of Apple's iPad Smart Cover.

In one aspect of the described embodiment, the iPad Smart Cover is a protective cover having a flap incorporating a magnetic element and the first sensor is a Hall Effect (HFX) sensor. The Smart Cover is pivotally attached to the electronic device such that in a closed configuration the magnetic element in the flap provides a first stimulus in the form of a saturating magnetic field that is detected by the HFX sensor only when the flap is in a closed configuration with respect to the electronic device. The second sensor is any of at least an ambient light sensor, a camera, a magnetometer, a multi-touch sensitive surface, an RFID device, and a second Hall Effect sensor.

Apple has been granted a patent today for their invention relating to the integration of a touch actuated sensor configuration with an organic light emitting diode (OLED) structure. 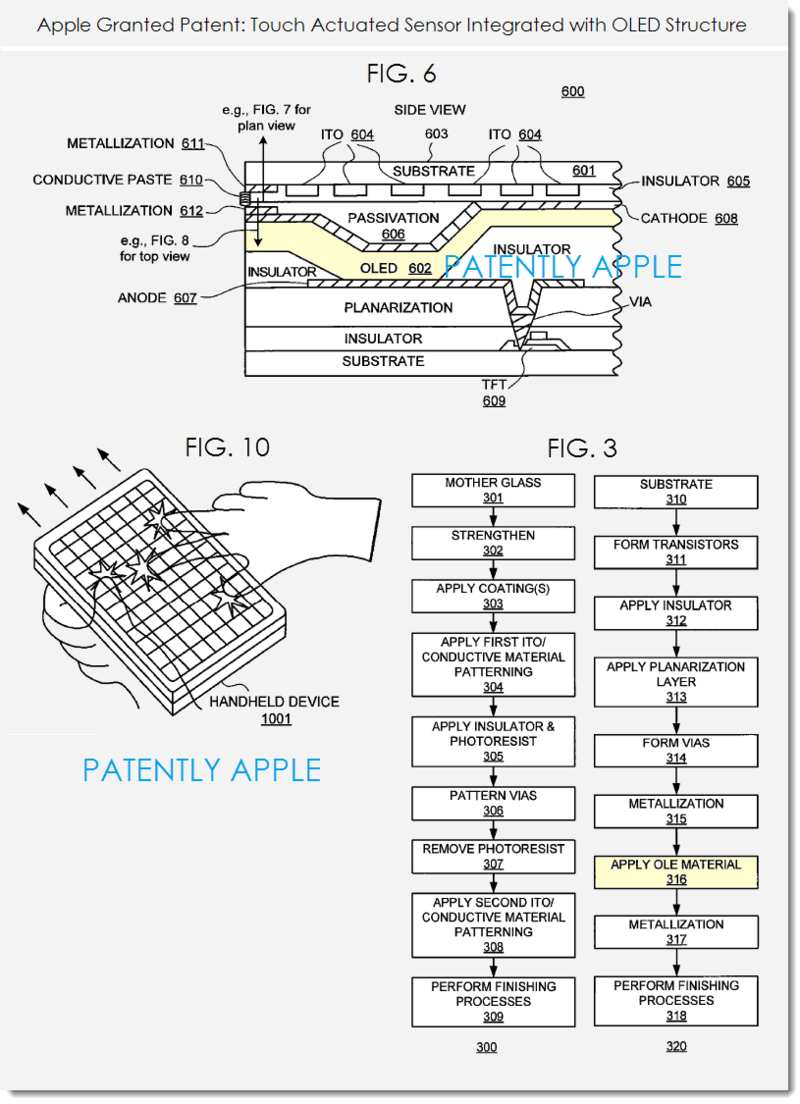 Apple credits Shih Chang and Steven Hotelling as the inventors of granted patent 8,624,849 which was originally filed in Q2 2009 and published today by the US Patent and Trademark Office. To review today's granted patent claims and details, see Apple's patent.

Apple has been granted a patent today for their invention relating to a highly advanced synchronized and interactive augmented reality (AR) display for future iOS devices. Apple's initial vision for using augmented reality applications in business, health care and education. Apple provides us with an example relating to a future AR Display in a variety of medical applications. In some implementations, a doctor will be able to use a future iDevice to capture a live video of the patient's face. Using pattern recognition and/or other information (e.g., a bar code or other patient identifier), information related to the patient (e.g., medical history, drug prescriptions) could be displayed on the iDevice.

In other implementations, a live video of a body part that needs medical attention could be captured and augmented with annotations that assist the doctor in making a diagnosis. The video could be shared with other doctors who could generate annotations on their respective devices to assist the doctor in a diagnosis. Pattern matching or other image processing could be used to identify problems with the injured body part based on its visual appearance (e.g., color). In one example application, an x-ray or MRI video could be displayed with the live video.

Apple credits Brett Bilbrey, Nicholas King and Aleksandar Prance as the inventors of granted patent 8,625,018 which was originally filed in Q1 2013 and published today by the US Patent and Trademark Office. To review today's 25 granted patent claims and details, see Apple's patent. Patently Apple first covered a related patent application published by USPTO back in July 2011. 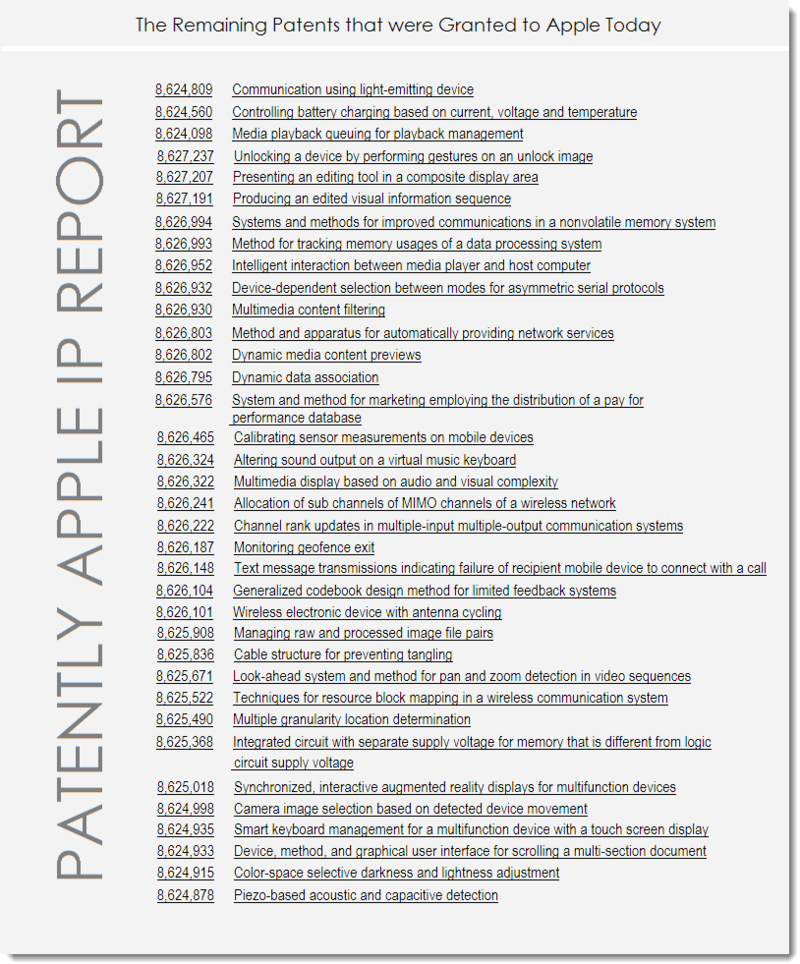