Apple Continues to Advance the iPen in 3 New Detailed Filings

On Tuesday we were surprised to see that Apple was granted a new iPen patent pertaining to orientation detection. While the late Steve Jobs wasn't a big fan of the "dumb stylus" of yesteryear that was basically a tiny plastic pencil, he knew that one day the technology would give rise to an advanced iPen. Apple has invested heavily in the modern iPen with over 20 patents to their credit thus far. Today, three new iPen related patent applications were published by the US Patent and Trademark Office that cover many new aspects of this invention including a unique eraser function.

In some instances it may be desirable for input devices, such as styli, to be able to transfer data, in addition to the touch location data, to the touch screen. For example, a stylus may have a finer tip than a user's finger and may be better able to transmit fine characters or symbols (such as those used in handwriting) better than a user's fingers. Additionally, using different input devices with a touch screen may allow an enhanced user experience, as data from the input devices (such as force, angle or tilt, or the like) may be communicated to the touch screen, which may use that data to change an output of the display or the like.

A first example may take the form of a computing device such as an iPad configured to communicate with an input device such as an iPen. The computing device includes a processor and a touch interface in communication with the processor. The touch interface is configured to detect an input signal corresponding to an object approaching or contacting a surface and includes a plurality of sensing lines and a plurality of driving lines. 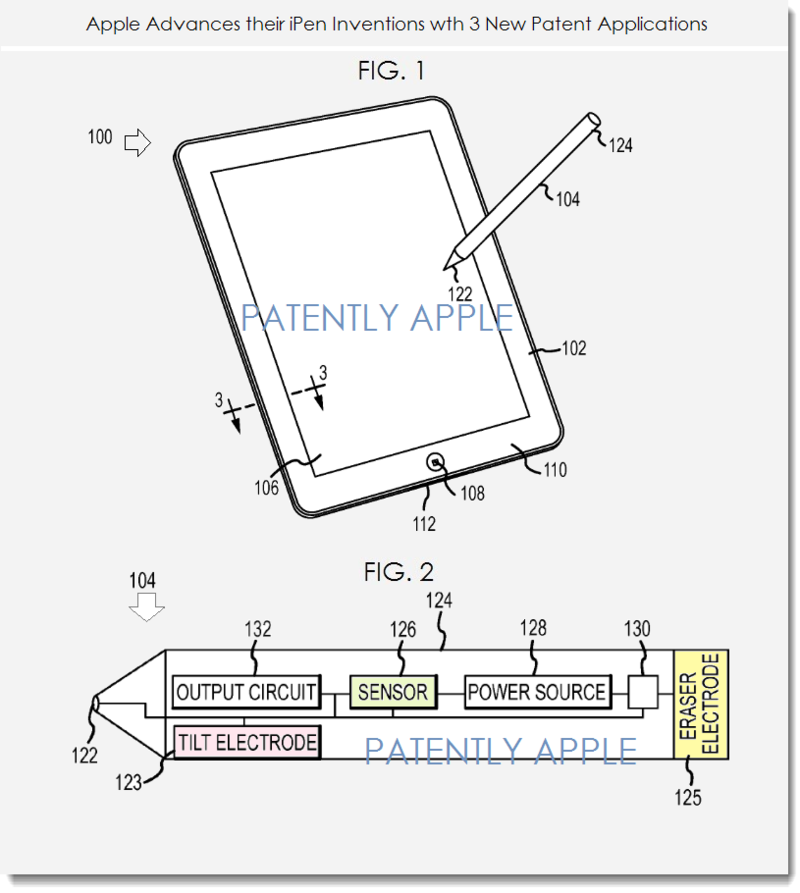 Noteworthy is patent FIG. 2 which includes a unique eraser electrode. 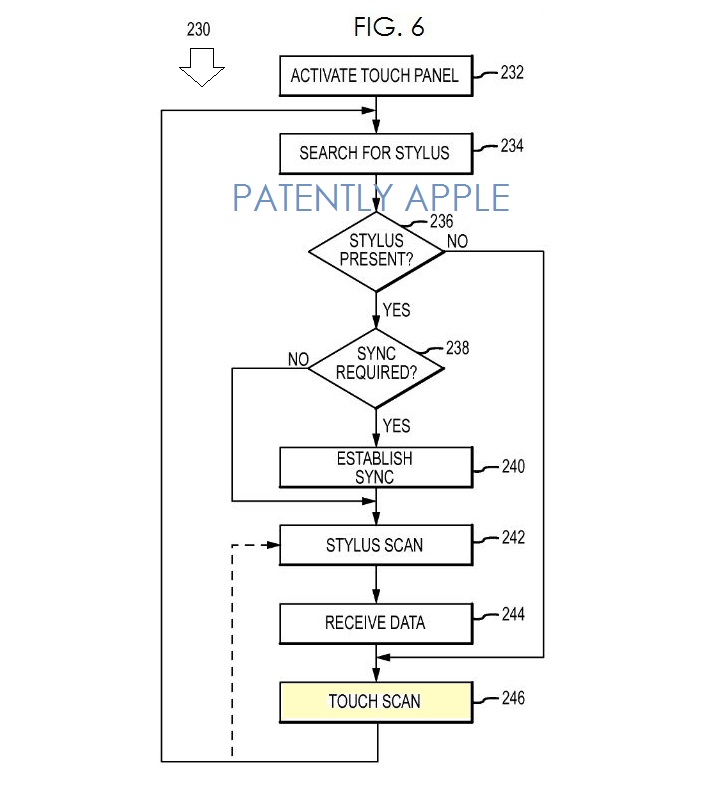 A third example may take the form of a method for transmitting data from an input device to a capacitive sensing grid of a computing device (As noted in patent FIG. 4 below). 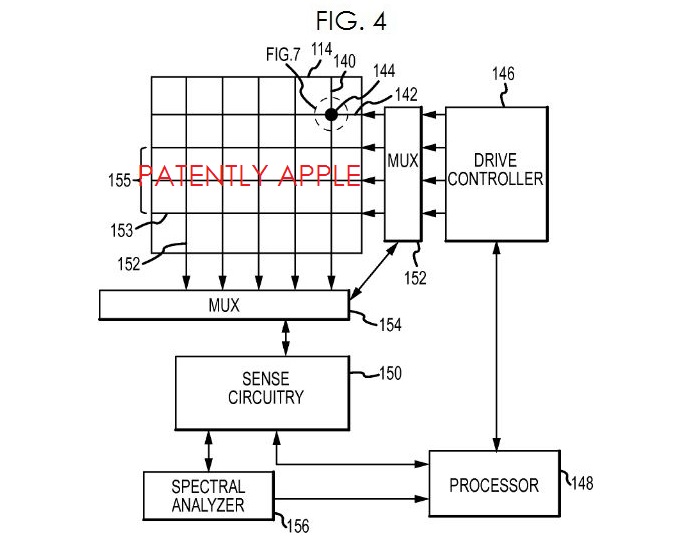 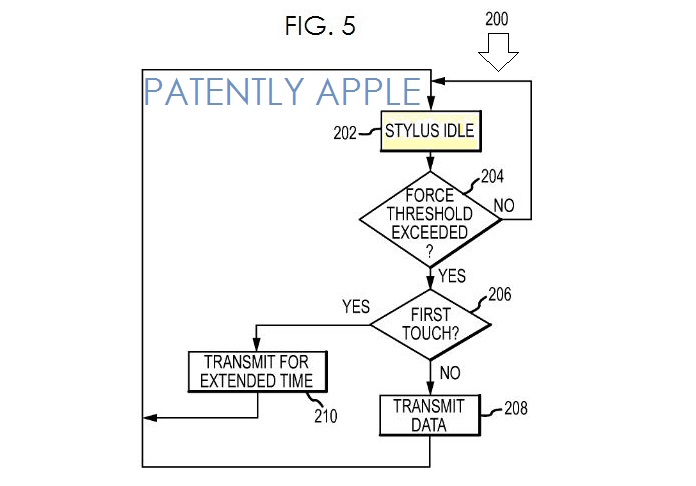 A Fourth example may take the form of a system for receiving and transmitting multi-frequency signals. The system may include an input device, such as a stylus, and a touch screen interface. The stylus may transmit one or more signals using two or more frequencies and the touch screen may select a particular frequency for receiving the one or more signals. The touch screen may select the particular frequency by determining the frequency that may be received most clearly, that is, the frequency that may be less affected by noise sources. The cleanest or clearest frequency may be selected using a spectrum analyzer or may be selected using a majorities rules or a medium algorithm. For example, the touch screen may analyze the at least two frequencies and determine the two closest results.

Apple's patent FIG. 9A noted below is an illustrative circuit schematic diagram of an implementation of the touch screen for receiving data through phase modulation. 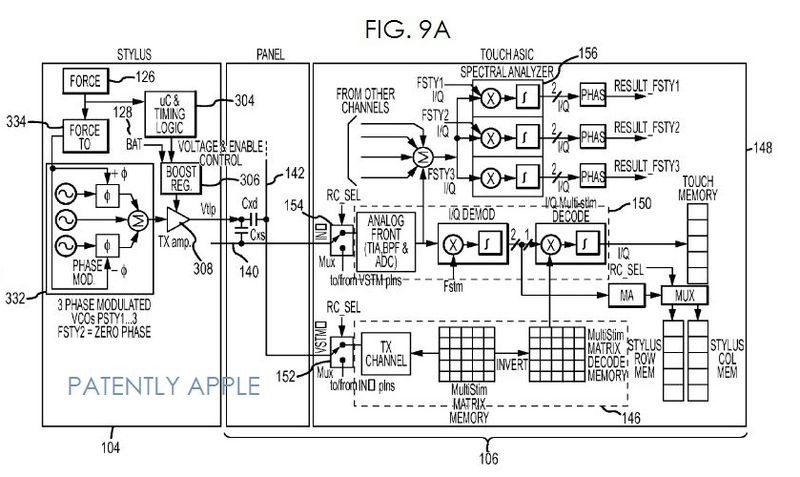 Apple credits Christoph Krah, Shahrooz Shahparnia and Steven Hotelling as the inventors of patent application 20140028577 which was originally filed in Q3 2012.