The Cordless Home is now in Reach with Magnetic Resonance

The wireless power transmission technique known as magnetic resonance was widely known by a paper published in 2007 by Prof. Marin Soljacic of MIT. Unlike the magnetic induction method that was invented 100 years ago, it has no restriction in distance. So you could charge devices without the need of a charging board of any kind. It's this attribute that it has been attracting popular attention as the next-generation wireless power transmission technique. One of the first wireless charging patents designed for the PC using a magnetic resonance system was Apple's November 2012 patent application which was granted earlier this month. Earlier in September we reported on a new more detailed patent filing from Apple on this very technology. We noted as far back as February that Apple and Samsung were in a race to be first with a next generation wireless charging system and last month we reported on Samsung's latest move on this front with a 3D orientation-free wireless power transfer patent. Samsung and Qualcomm will likely be first to bring magnetic resonance solutions to smartphones in in late 2014 or early 2015, though Apple could always surprise us on this front. Now a new report suggests that magnetic resonance technology could lead to the cordless home over the next 3-5 years.

According to a new report, a technology for wirelessly transmitting electric power a few meters away has been developed. We will be able to do away with the cords of TVs and home appliances strewn around the house. The age of so-called 'Cordless Home' is dawning.

The Korea Electronics Technology Institute (KETI) announced on Thursday that it succeeded in developing a magnetic-resonance-type wireless power transmission technology. According to this technology, the transmitter creates a magnetic field and radiates it to the receiver. The energy (electric power) is delivered through this radiated magnetic field.

Its structure is similar to that of the induction range that delivers heat only to the dedicated container. The induction range delivers heat, but this technology is a high-level technology that must deliver energy without generating heat. The transmission distance of the magnetic resonance method exceeds 3 feet, far superior to the magnetic induction method whose transmission distance is no more than an inch and restricted to charging boards.

Its transmission distance is a little over 3.5 feet, and if the hub, called a 'relay,' is installed, the distance can be increased. For this demonstration, two relays were used and electric power was transmitted as far as 12 feet. Theoretically speaking, an unlimited number of relays can be installed in a home.

It will be possible to commercialize this technology for products consuming little energy, such as cell phones, as early as the end of next year – which is something we've been reporting on.

Household appliances seem likely to be commercialized as early as 2016 and this is one area that Samsung may likely lead in. To prevent the controversy over health risks, the technology will have built-in avoidance technology. KETI stated that they're thinking of blocking electric power if a person approaches a particular device in range.

As this technology made the landline phone disappear, the cordless home will become possible. Many application products, such as robot vacuum cleaners that don't need to be recharged, are forecast to appear.

The Korea Electronics Technology Institute spent more than 5 years in developing this technology. The report further states that KETI holds 88 patents at home and abroad with no similar technology having been confirmed overseas yet.

That may be true to a certain extent, though similar technology has been developed. You could check out the latest news on this technology at Rezence, an alliance for wireless power based out of Fremont California. Magnetic Resonance is the focus of this alliance and their site can provide you with a grand overview of what's just around the corner including magnetic resonance being integrated into clothing. You could find a list of others working on similar solutions here. 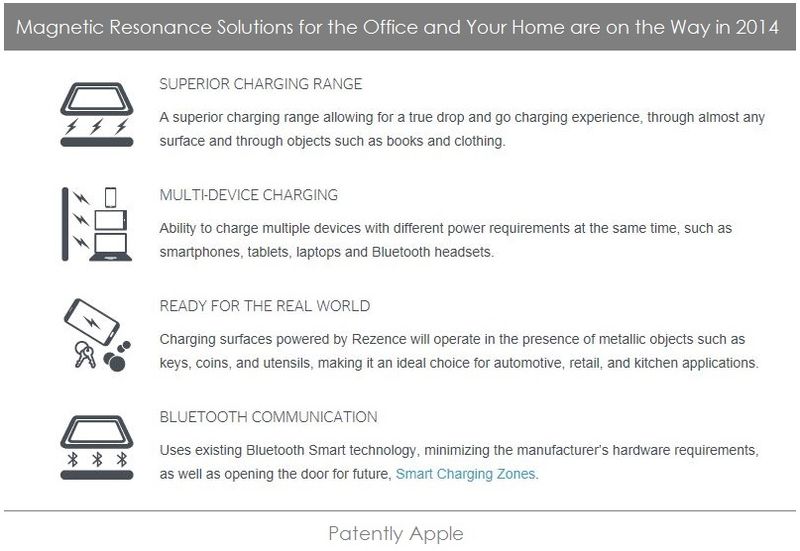 With the cordless home now in sight, the race for next generation magnetic resonance wireless charging, at least for the PC and mobile devices, appears to be on the wireless industry's roadmap beginning in late 2014 and I can't see Apple being too far behind.

As mobile devices are leading the technology sector in sales, mobile users have been hoping for an advanced wireless charging solution on a grander scale to emerge for years. Finally relief is on the horizon.

With Apple's 'iOS in the Car' services coming to market in 2014 through 18 car companies and Indoor GPS services not far behind, 2014 could usher in some very interesting and exciting technologies to look forward to next year along with a possible redesigned iPhone 6. Yet in the end, I think everyone can agree that faster, easier wireless charging is definitely at the top of the wish list for most.