Foxconn's Boom in Profits Mainly Due to Great iPad Sales

DigiTimes is reported today that Foxconn Electronics (Hon Hai Precision Industry) has reported its consolidated revenues hit a record at US$15.41 billion for November, with growth of 19.23% on month and 18% on year. The growth was mainly generated by shipments of consumer electronics, Foxconn said. Market sources noted Foxconn's sales were buoyed by shipments of the iPad Air, iPad mini with Retina display and new game consoles. Considering that console sales are no more than 3 or 4 million units, the majority of their profit boost was from great iPad sales which could bode well for Apple in their Q4 financials. 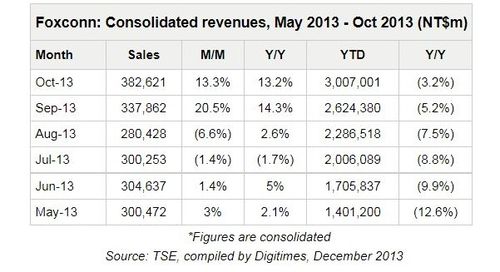