According to Counterpoint's Monthly Market Pulse report for October 2013, Apple's iPhone 5s continued to be the bestselling phone globally during October. Apple's iPhone 5s sales saw an upward sales momentum as Apple continued expansive roll-out for its flagship model thus further widening the gap with its arch rival's flagship model Samsung's Galaxy S4. Apple's iPhone 5s topped the best-seller's list despite the component shortages causing long waiting periods in several channels and without Mobile China that is expected to launch iPhones in the coming days ahead.

With Mobile China on board and supply constraints to ease going forward, it should result in supply meeting a relatively stronger demand in November & December. 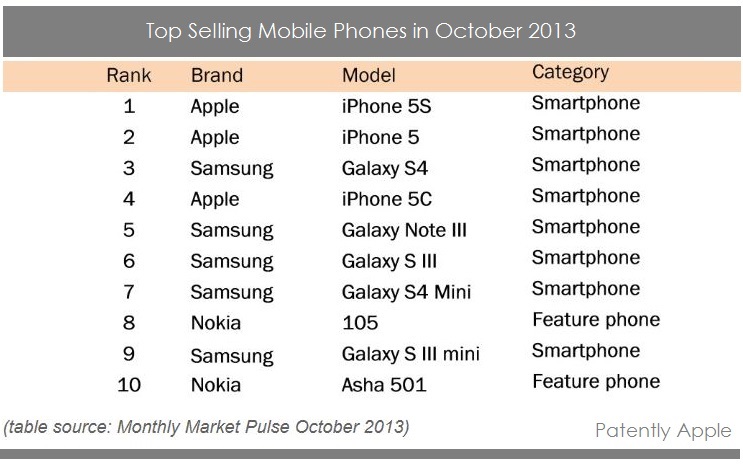 Apple's iPhone 5s helped Apple surpass Samsung in the US as well as maintain its leadership position in the Japanese smartphone market during October. Apple's smartphone market share climbed to 12% mark in China in October, instantly making it the 3rd largest smartphone player in the market up from a modest 3% share in September.

Although the iPhone 5s didn't attract long queues outside Apple retails stores as the iPhone 4S did couple of years ago but it definitely was more successful compared to what iPhone 5 registered in terms of overall sales in a month.

Also, with China Mobile deal on the horizon, Apple iPhone 5s at all three carriers will for sure ignite a 'price war' boosting the overall iPhone 5s sales in China. This might allow Apple to even reach the No. 1 smartphone player in December or January in China – and that would be quite the feat.

And on a final note, we reported earlier today that Apple's iPads are on a roll as well which should put a smile on shareholder's faces as Apple prepares to announce their quarterly financials in early January. With every iDevice firing on all cylinders this holiday season, Apple should deliver solid profits.