In February during the Goldman Sachs Conference, Tim Cook described OLED displays as awful. "If you buy things online, you should think twice before you depend on the color of the OLED display. The Retina display is twice as bright as an OLED display." Cook added that "Some people use OLED displays, but the color saturation is awful." While Apple's CEO downplayed OLED, the fact is that Apple has a great number of patents covering the improvement of OLED displays and in February they recruited a former senior researcher at LG Display to work on display technology. In today's patent application published by the US Patent and Trademark Office we learn that Apple is working to integrate thermal sensors into displays in order to control color. The advantage to OLED that Apple may not be able to ignore is that they can be flexible for future wearable computers like a computer band or iWatch.

Electronic devices and systems increasingly include display screens as part of the user interface of the device or system. As may be appreciated, display screens may be employed in a wide array of devices and systems, including desktop computer systems, notebook computers, and handheld computing devices, as well as various consumer products, such as cellular phones, televisions, and portable media players.

To display images, videos, and user interfaces, displays use arrays of pixels, each pixel having multiple colors. Primary colors of light (e.g., red, green, and blue) may be combined in each pixel to create many other colors, including white. Controllers drive pixels with coordinated instructions to create an image on the display. Some displays involve illuminating a backlight through a light-modulating liquid crystal layer (e.g., typical liquid crystal displays) while others involve directly illuminating each pixel to a desired intensity (e.g., organic light emitting diode (OLED) displays).

Because each OLED may emit its own colored light, OLED displays may be thinner and lighter than displays requiring a backlight. OLEDs may also be desirable because they may be fabricated on flexible or rigid substrates. OLED displays may also allow better viewing angles and better color than some liquid crystal displays (LCDs).

While OLED displays do not require a backlight, a variety of other electrical components may be placed in various locations beneath a display. These components facilitate the operation and function of the electronic device. Some components of an electronic device that may be beneath an OLED display include processors, radio transmitters, batteries, speakers, cameras etc. Some of these components draw current and may warm during use. Some components, such as a processor or radio transmitter, may get particularly warm during use or extended use. As a result, portions of the display may also warm due to these warming components beneath the display. Moreover, because some components may warm more than other components, some portions of the display may warm more than other portions.

Heat may affect characteristics of emitted light from OLEDs. In addition to accelerating aging, the color and brightness of light emitted by OLEDs may be affected by the operating temperature. The brightness of some OLEDs, particularly red OLEDs, may decrease as operating temperatures increase. Over time as each OLED ages due to use and temperature, images shown on parts of the display may appear different from the intended image. Controllers may make changes to compensate for such shifts in brightness and color. However, color and brightness shifts may occur differently across a display due to unpredictable use of each OLED and the components beneath each OLED.

Apple's invention relates to electronic displays and, more specifically, to displays with integrated thermal sensors. Apple states that aging may occur in an unpredictable manner due to differential use of the display and components by end users. Knowing the operating temperature, temperature history, and/or usage history of the OLEDs could improve compensation. Accordingly, embodiments of the present invention relate to OLED displays and techniques to adjust OLED displays to maintain a desired appearance.

Thermal sensors integrated in the display as noted below in patent FIG. 12 may also be used to determine thermal characteristics of components beneath the display to adjust the operation of the components. In an embodiment, each OLED is associated with a thermal sensor to measure the temperature and/or aging characteristics of that particular OLED. The integrated thermal sensors may enable controllers to maintain a substantially uniform display appearance throughout the life of the display regardless of use and temperature variations. 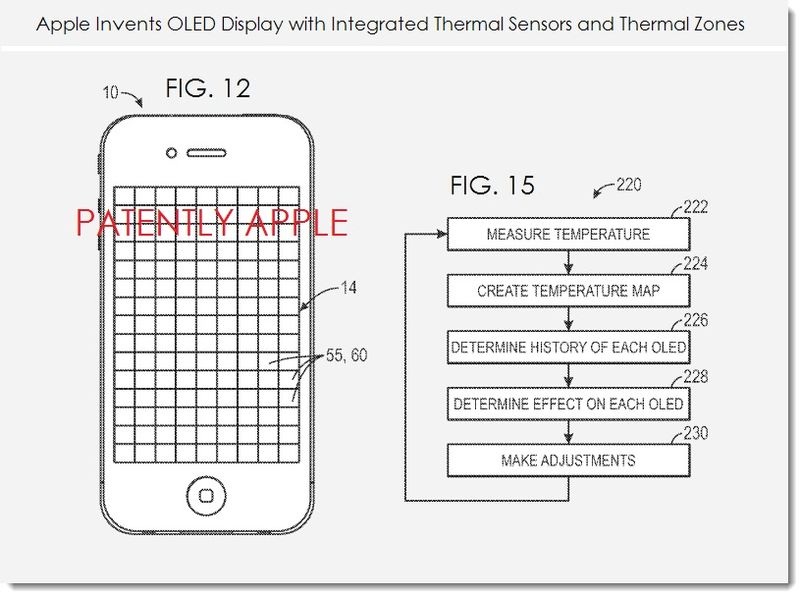 As mentioned above, aged OLEDs may emit light different from less aged OLEDs, and operating temperature affects aging. As OLEDs age at different rates and are subject to prolonged increased operating temperatures, the overall quality of a display appearance may decrease. In some embodiments, the temperature map may contribute to an aging determination for each OLED. Temperature and usage histories may be recorded in memory and used to determine the aging of each OLED or portion of the display.

Controllers may determine compensations for each OLED such that the light emitted from each OLED substantially matches the light target for each OLED. In some embodiments, compensations may be based on comparing the aging determination with calibration curves, tables, algorithms, or the like stored in memory. Controllers may adjust the driving strength for each OLED to emit light with the target properties to compensate for the affects of operating temperature and/or aging. This adjustment may prolong the useful life of a display and maintain a desirable display appearance for longer than would otherwise be possible.

As illustrated in FIG. 4, an embodiment of an OLED display 14A may include multiple layers. The OLED layer 44 may be disposed over a substrate 46 and a top layer 40 may be disposed over the OLED layer 44. Apple notes that the substrate may include glass, plastic, other suitable materials, or combinations thereof, and may be either a rigid or flexible material. This is something that Apple presented in another major OLED patent concerning flex displays for future smartphones and/or an iWatch like information band back in February. 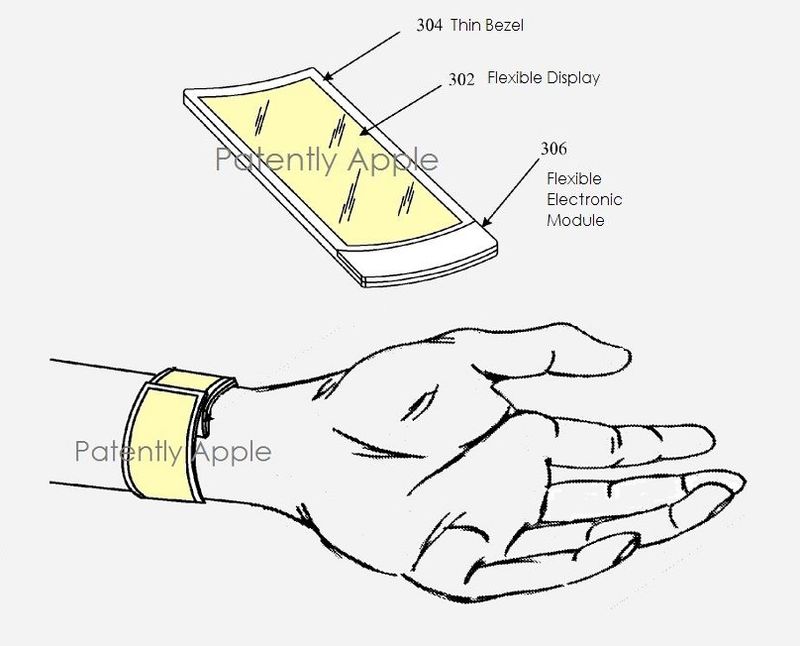 Further, Apple states that in different embodiments the substrate may be opaque, reflective translucent, or transparent. A recent Samsung patent shows that they're already working on transparent displays for future smartphones.

The patent states that the invention is primarily covering the iPhone, iPod and iPad and all Macs. Though adding a television into the mix in the patent background can't be ignored either.

Apple credits Stephen Lynch, Paul Drzaic, Benjamin Rappoport, Fletcher Rothkopf, John Ternus and Scott Myers as the inventors of this patent application which was originally filed in Q2 2012 and published today by the US Patent and Trademark Office.