Apple Invents In-Vehicle Holistic ID for "iOS in the Car" 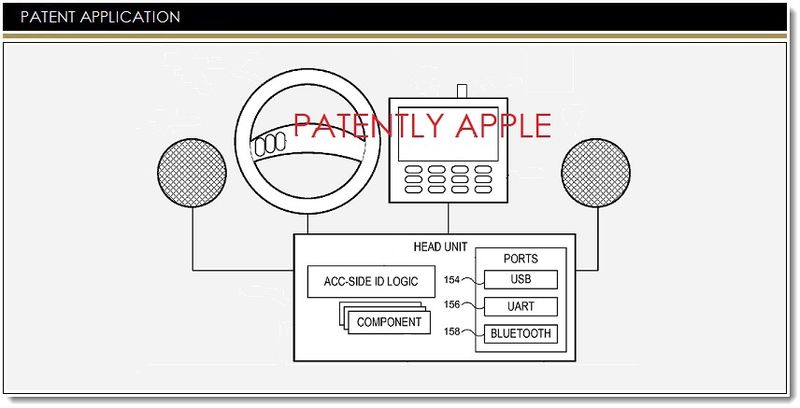 On December 12, 2013, the US Patent & Trademark Office published a patent application from Apple that reveals a new aspect to their forthcoming "iOS in the Car" product that will be supported by more than 18 car companies by the end of 2014. The invention generally relates to providing an in-vehicle infotainment system with a logical holistic ID methodology for coordinating multiple services with multiple devices automatically and seamlessly throughout the vehicle.

Examples of accessories include chargers, speaker docks, in-vehicle docks that provide options for controlling the portable device using the vehicle's console, workout equipment, health monitoring accessories (e.g., heart rate, blood pressure or glucose meters), and so on. Accessories can be designed to interoperate with multiple portable electronic devices that may differ in their form factor and capabilities (e.g., processing power; firmware version; battery life, presence or absence of cameras, microphones, or other components). In addition to variability in "internal" components, accessories can also incorporate a variety of communication interfaces for purposes of communicating with portable devices.

Apple's invention generally relates to communicating data between electronic devices and in particular to holistic identification of one device to another.

Obtaining complete identification of all available communication interfaces and/or components from the accessory at the outset of interoperation can enhance the ability of the host device to interoperate with the accessory in a coordinated manner. 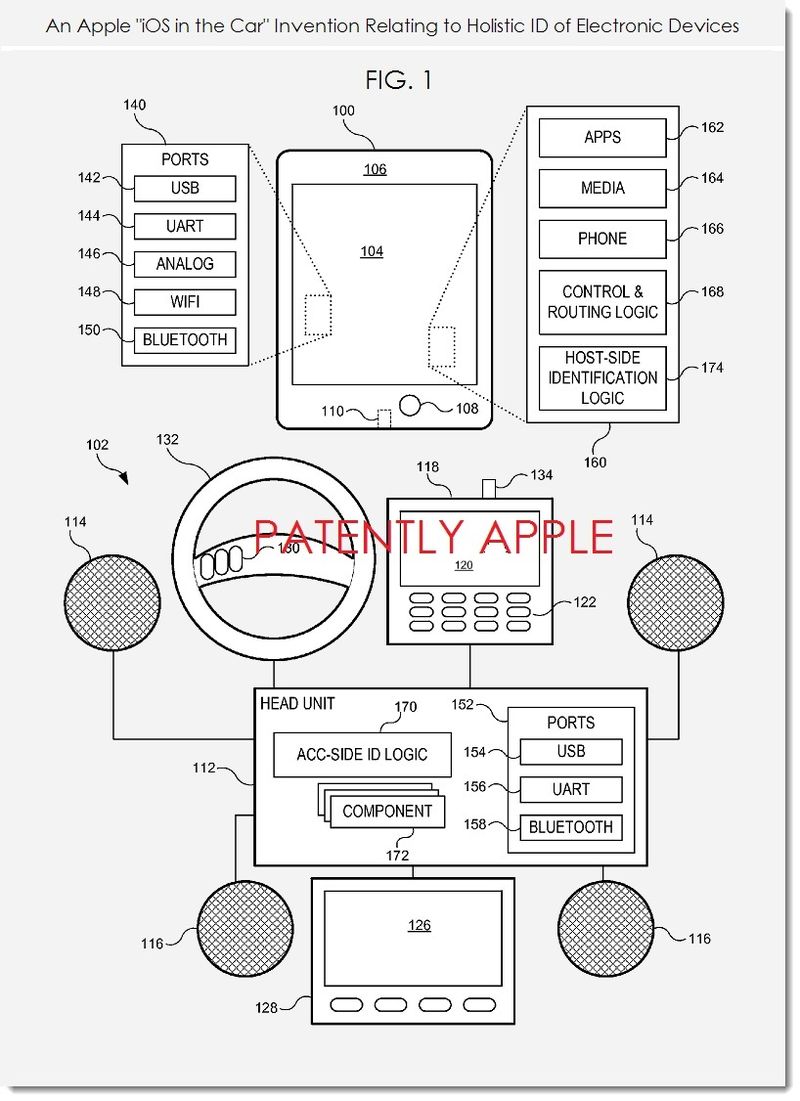 Apple's patent FIG. 1 shows a host device 100 (an iPad) and an accessory 102. The host device 100 can be a handheld device such as a media player, smart phone, or personal digital assistant; a tablet computer; a laptop computer; or any other electronic device capable of communicating with accessory devices.

Accessory 102 can be any accessory capable of interacting with host device, such as a speaker dock or speaker system, a media console, an automobile head unit, or the like.

In the example shown, the accessory is a multi-component, multifunction device such as an entertainment and information system provided in a motor vehicle. A head unit (#112) coordinates the operation of various components. The components can include, for example, front speakers (#114); rear speakers (#116); a front console unit (#118) with a display (#120) and input controls (#122); a rear console unit (#124) with its own display (#126) and input controls (#128); and additional controls (#130) mounted in steering wheel (#132).

The accessory can provide support for a number of services. For example, the accessory can present navigation information to a driver on the front display while presenting a movie or other entertainment on rear display. In some embodiments, the accessory can provide different audio streams to different speakers. Thus, for example, audio associated with a movie being presented on rear display can be provided using rear speakers while a different audio stream (e.g., from a radio station) can be provided to the driver and any front-seat passengers using front speakers.

For instance, caller-ID info from an incoming call can be routed to the front/driver display while a movie is streamed to the rear/passenger display. As another example, if a call comes in, the control and routing logic can continue to deliver media content to the rear display and speakers (possibly at reduced volume) while providing audio from the phone call to front speakers.

Holistic identification information can also be useful when control and the routing logic receive information from the accessory. For example, input from rear-seat controls (#128) can be interpreted as controlling media being streamed to the rear seat (e.g., play, pause, asset selection), while input from steering-wheel controls can be interpreted as controlling a different operation, e.g., initiating or terminating a phone call or controlling a different media stream that is being delivered to the front seat.

To facilitate interoperation, the host device and accessory can negotiate an operating agreement that defines the functionality they will mutually support and that also specifies the various components and capabilities of the accessory. In some embodiments, the agreement is negotiated when the host device and accessory establish a connection, and negotiating the agreement can be part of a device identification process.

For example, the head unit of the accessory device can include accessory-side identification logic (#170) that makes use of component descriptors (#172) for each component of the accessory. A "component" can be, for example, a specific port (communication interface) or a particular input/output device that can interact with host device and the descriptors can include information about each component. In the embodiment of FIG. 1, examples of components can include the front console display, front console keyboard, front speakers, steering wheel controls, rear display, rear controls, and rear speakers, as well as USB port (#154), UART port (#156) and the Bluetooth port (#158).

In some instances, component descriptors can also include "bundle" descriptors that identify groups of components as being related into a logical unit having a particular purpose. Thus, for example, the rear display, rear controls and rear speakers can be further identified as components of a bundle whose purpose is, e.g., "passenger entertainment." The component and bundle descriptors can be defined, e.g., within the accessory firmware stored in the head unit, and provided to the host device by accessory-side identification logic during an identification process.

Apple credits Shailesh, Edwin Foo, Jason Yew and Gregg Golembeski as the inventors of this patent application which was originally filed in Q4 2012 and published today by the US Patent Office. This is a very detailed patent. For those wishing to investigate it further, see Apple's patent Application 20130332632.