On December 26, 2013, the US Patent & Trademark Office published a patent application from Apple revealing a new and unique anti-counterfeiting solution for future hardware such as an iPhone, iPad or even MacBook Pro. The proposed invention will utilize a 3D variable depth coding system on various parts of products that could either be visible or invisible to the naked eye. Whether Apple has gone to the trouble of inventing such a sophisticated anti-counterfeiting system to combat current or future Black Market activity is unknown at this time.

Beyond having to deal with copycat manufacturers like Samsung, Apple has to now deal with black market product counterfeiters selling fake iDevices (and Apple products in general). Apple's patent generally relates to coding techniques and, more specifically, to techniques implementing three-dimensional coding onto Apple devices for verifying original products.

According to Apple, the 3-D codes may be provided on electronic device housings to help track the device during and/or after manufacture. In particular, the 3-D coding may identify electronic devices including, but not limited to, media players, computers, televisions, mobile phones, and so forth. 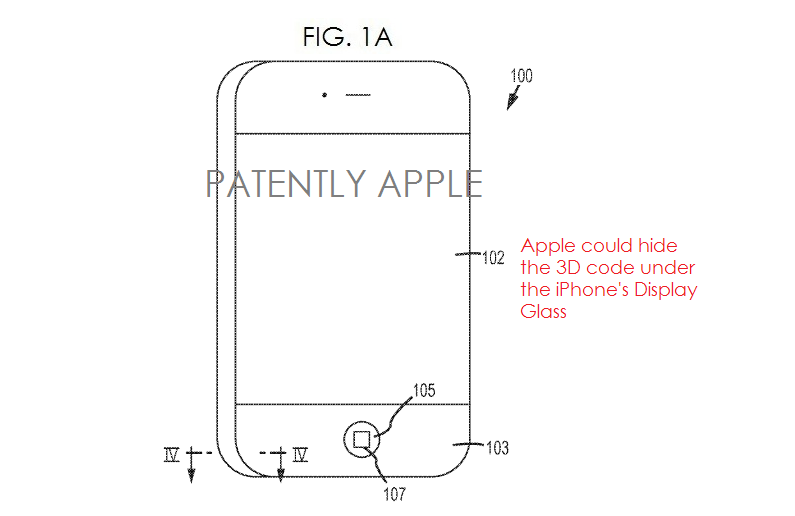 In Apple's patent FIG. 1A we see an example iPhone in which the 3-D coding may be integrated directly into the cover glass 102 or under the cover glass. In one example, the code may be located under an ink coated portion 103 of the cover glass to obscure the code.

While Apple does indicate in their patent filing that in an alternative embodiment the 3-D code may be located in the Home button, this would likely be limited to an iPod considering that the Home Button on the iPhone is now reserved for all-things related to Touch ID. 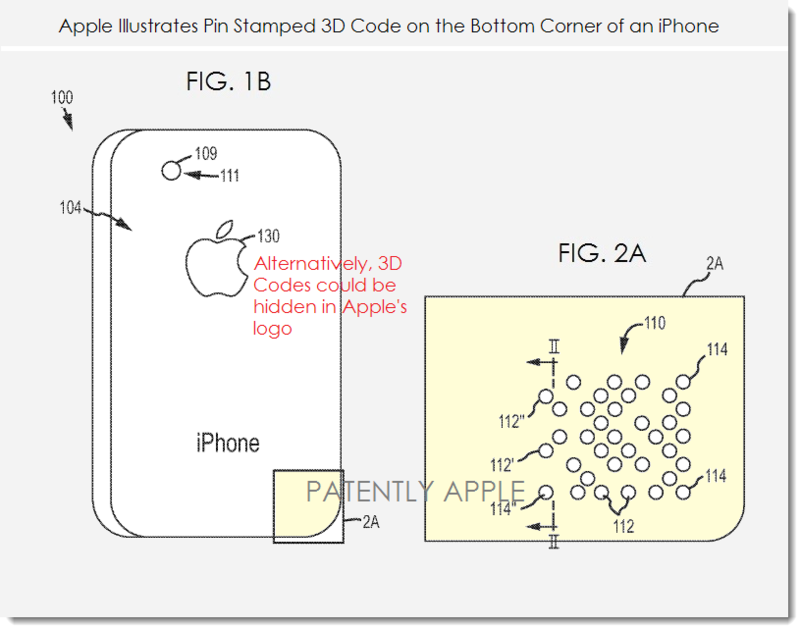 In another example, Apple illustrates FIG. 1B with a 3D code being placed on the backside of a future iPhone. The 3-D code may be created in a generally unused portion of an exposed component, such as an ink circle around the iPhone's camera. Such positioning may serve dual purposes of providing a known location for detection of the code, as well as obfuscating the presence of the code.

In particular, when the code is so small that it is not detectable to the human eye, a macroscopic positioning feature may be provided (e.g., such as the ink circle or other feature) and a "zoom-in" may be performed to visualize the code. Hence, a tedious search for the code may be avoided.

In some embodiments, the code may obfuscated and not detectable or at least not easily detectable to the naked, human eye. Thus, the 3-D code may be positioned in nearly any location on a device without diminishing or taking away from an aesthetic appearance of the device.

In other embodiments, the 3-D code may be sized so that it is detectable or visible on the device. The code may be consistently located in the same position on each device so that it may be found. For example, the code may be located in a lower, right corner on the backside of the device, such as the boxed area 2A in FIG. 1B. Alternatively, the code may be located within a known portion of a logo or lettering. In embodiments where the code is not visible to the naked eye, such positioning may help with obtaining a proper reading of the code and/or locating of the code.

Apple's patent FIG. 2A illustrates an example code #110 that may be pin-stamped into a surface of the electronic device. The code may take the form of a number of elements (#112) arranged in a pattern having absolute and/or relative positional significance. In particular, the location of each of the elements within the code may hold significance as well as the location of each element relative to other elements. Additionally, one or more orienting elements (#114) may be utilized to help properly orient a code reader relative to the elements of the code.

Apple additionally notes that each of the elements in the code may have a varied depth. The varied depth may further encode information. As noted below in patent FIG. 2B, we see a cross-sectional image of the code. As may be seen, each of the elements has a unique depth. In some embodiments, the depth may vary between two or three levels. The number of unique depths that the elements may have is limited only by the depth resolution of a scanner used to read the code and the depth resolution of the encoding mechanism (e.g., laser, pin-stamp, and so forth). As such, higher resolution, 3-D scanners may allow a high number of various depth levels, and therefore allow for the density of information encoded into the code to be higher. 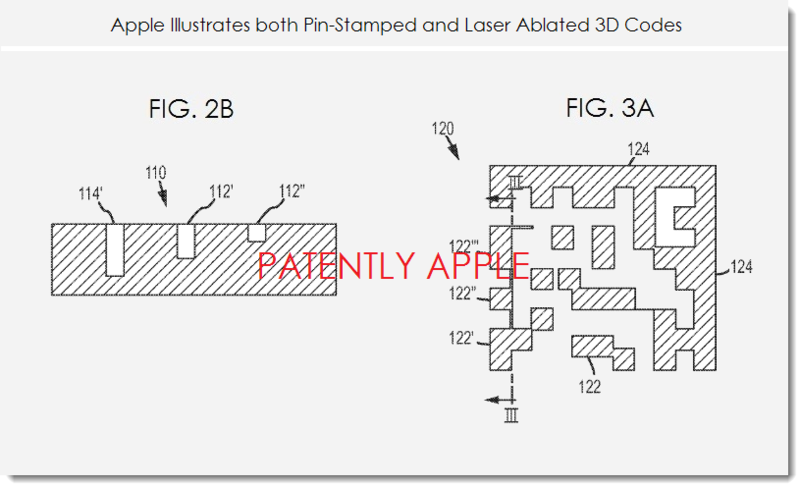 In some embodiments, a machined 3-D code may be further encoded with a laser ablated code. For example, the device may be pin-stamped with a code such as code with multiple elements of the code being encoded with varied depth. A laser may then be used to ablate a bottom surface of one or more of the elements 112. As such, a laser ablated code, such as code #120, may be located within an element of the pin-stamped code. Each of the different codes may be used to communicate different information. In other embodiments, the codes may be used together to communicate a single, cohesive block of information.

Apple notes that other devices like the MacBook Pro could use another method of coding using through-holes like a sleep indicator to hide the code. Alternatively, the through-holes may be through a paint layer on a transparent part.

Apple credits Canadian employees Simon Larocque-Lancaster as the sole inventor of this patent application which was originally filed in Q2 2012. Both inventors were also behind another Apple invention that we covered in a July report titled "Apple Invents a Wild Unibody Magnetic Coated MacBook Lid."