On December 05, 2013, the US Patent & Trademark Office published a patent application from Apple that reveals a new smart dock with voice recognition and activation. The voice recognition system is illustrated in a device such as an alarm clock though technically it could be an Apple TV or other future device. The user will be able to place a phone call, play a tune, send a message or create a calendar entry by just speaking it aloud and the docked iDevice will respond due to its "listening mode." In other words, Siri may be coming to a future iDevice dock.

Portable electronic devices, such as cellular phones, have become ubiquitous in today's society, as have the peripheral electronic devices that support their use, such as docking stations and the like. Some portable electronic devices such as the iPhone can provide users with a variety of services in addition to facilitating telephone calls. Such services can include messaging (voice, SMS, e-mail, instant messaging, application messaging, etc.), management and playback of media content (music, videos, audiobooks, photos, documents, etc.), storage of personal data (calendar, contacts, notes, etc.), Internet access, and the ability to execute various applications.

Some existing portable electronic devices include voice recognition capabilities that allow a user to access the various functionalities on their device using audible voice commands. However, the utilization of such voice recognition capabilities in existing devices typically involves an initial activation step requiring the user to interact with the finger controls and/or GUI of their device before voice commands can be processed.

Embodiments of the present invention provide improved apparatus, systems and methods for communicating with a portable electronic device to activate a voice recognition mode.

Apple's patent FIG. 1 noted below illustrates a simplified perspective view of a dock according to an embodiment of the present invention that activates a voice recognition mode of a portable electronic device such an iPhone. The dock can include a housing and one or more user interface components integrated within the housing. For example, the dock can include a microphone (#114) configured to receive voice and audio input from a user, and one or more speakers (#112) for presenting audio output to a user. 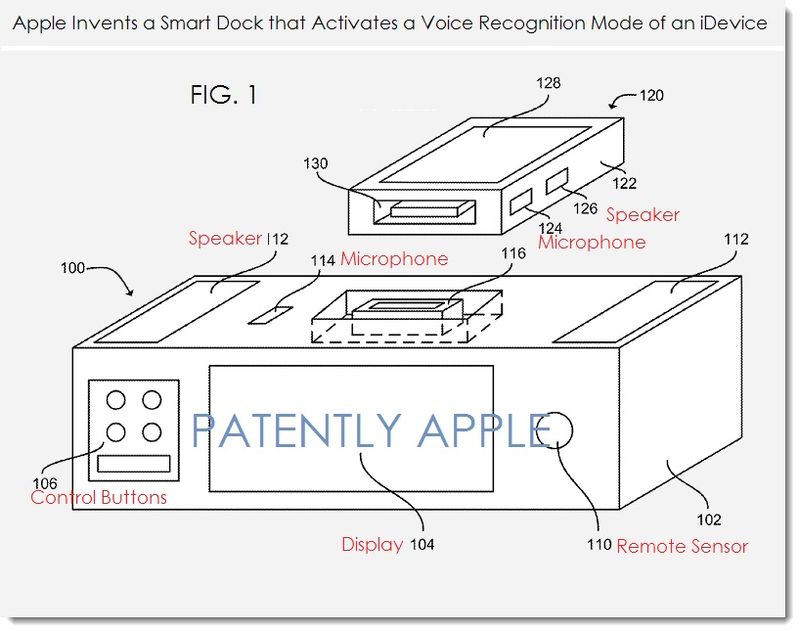 The dock can include one or more control buttons (#106) for a user to control various functionalities of the dock (e.g., volume, tuning, audio source, equalization, etc.) and a display screen (#104) which can display the current time and provide visual feedback regarding the operation of the dock. The display screen can also include a touch interface for a user to provide touch input to control various functionalities of the dock.

In embodiments of the present invention, the dock can include a remote sensor (#110) for communicating with a remote control (not shown) using infrared (IR), radio frequency (RF), or any other suitable mode of wireless communication, to communicate user input to the dock.

The portable electronic device such as an iPhone or iPod can include a microphone for receiving voice input from a user, and one or more speakers for presenting audio output to a user.

Apple further notes that the dock and portable electronic device can also include hardware configured to charge a battery (not shown). For example, the dock can be coupled to a power source and can deliver power to portable electronic device using any suitable means of power delivery such as conductive charging (e.g., direct coupling utilizing the contacts of connector 116 and receptacle connector 130) and/or wireless energy transfer (e.g., inductive coupling, magnetic resonance, etc.).

Apple notes that in embodiments of the present invention, the dock may be configured to analyze accents, varying speed of delivery, pitch, volume, inflection, and other aspects of the received audio input during the initial setup process.

Apple describes that user's will be able to use voice input to make a request. The user request may be to utilize one or more services, applications, and/or functionalities of their iDevice such as placing a phone call, playing multimedia content (e.g., playing a song from the user's music library), sending a message (e.g., a voice message, e-mail message, SMS message, video message, instant message, meeting invite, etc.), creating a calendar entry (e.g., creating a meeting, task, reminder, etc.), retrieving driving and/or walking directions, retrieving public transportation information, setting an alarm, checking the weather forecast, locating attractions, creating restaurant reservations, accessing reviews, searching the Internet, and/or the like.

The user request may also relate to system notifications of an iDevice such as missed calls and unread voice messages, e-mail messages, SMS text messages, instant messages, and/or the like.

Apple's patent FIG. 4 illustrates a flow diagram of a process usable by the dock to receive voice input from a user and to provide audio output generated by an iDevice to the user. 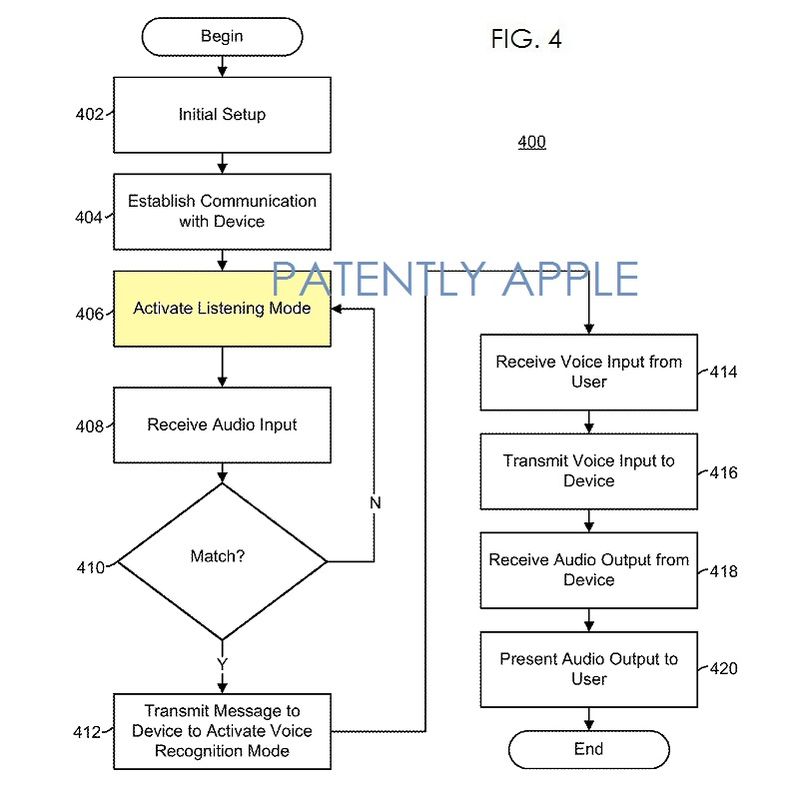 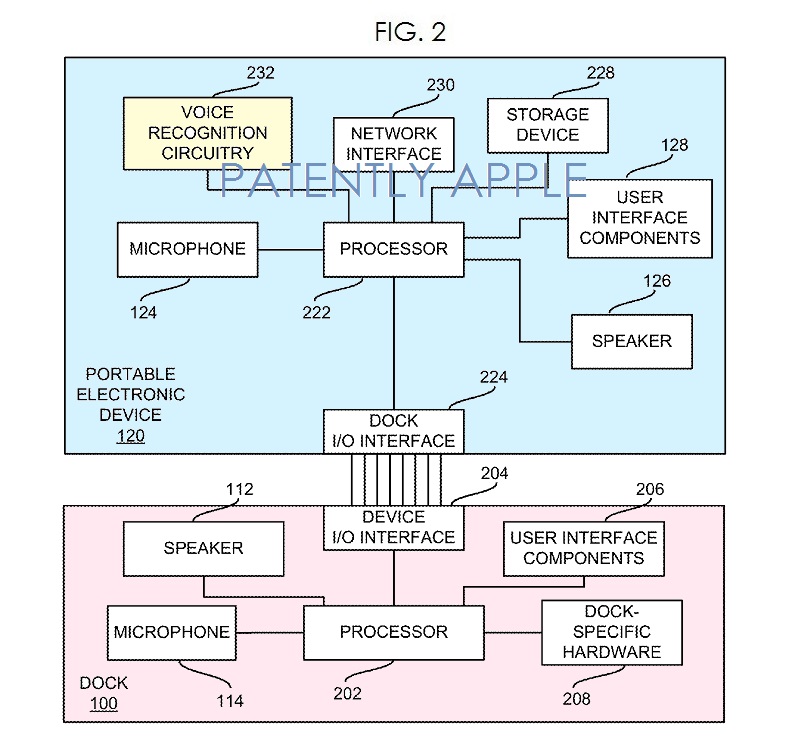 Apple credits Scott Krueger, Jesse Dorogusker and Erik Wang as the inventors of this patent application which was originally filed in Q2 2012 and published today by the US Patent and Trademark Office.