The Secrets behind the new iPad Air Retina Display Revealed 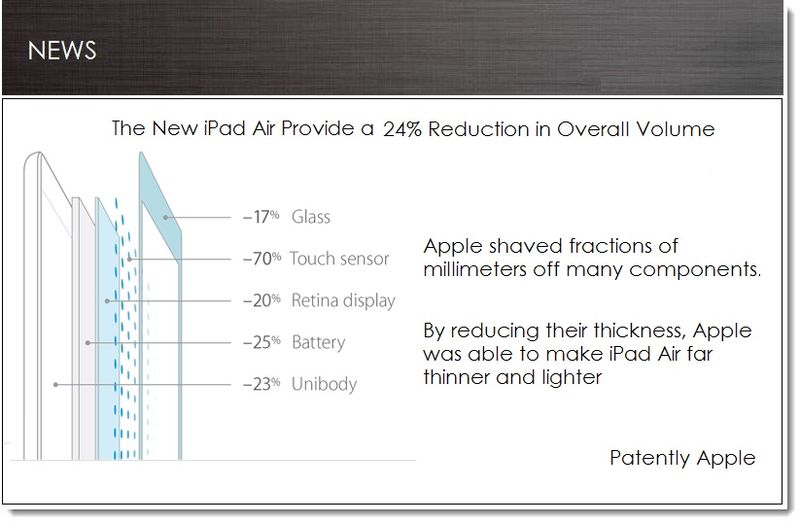 Walt Mossberg noted on Tuesday that the new iPad Air is the best tablet he ever reviewed. In TechCrunch's review they stated that "Apple Makes Big Tablets Beautiful All over Again." The review emphasized the iPad Air's shedding of both size and weight and how could they not considering that Apple's own website spells it all out in detail. The iPad Air reduced the size of the glass, touch sensor, battery, unibody and its high-end Retina display as noted in our cover graphic. Today's report reveals the new technology and process that were applied to Apple's Retina display so as to allow it to be that much thinner and lighter.

The previous iPad display was coated with indium tin oxide (ITO) to form an LCD insulator film. However, this time around, the thickness of this film was reduced and transmission factor enhanced with the application of ITO and multi-layer coating technology.

The thin glass technology has also been further advanced. This is a technology to melt upper and lower substrates of a display glass panel using chemicals to make them thinner.

The second improvement made to the iPad Air's Retina display involves a new glass thinning process technique that has recently been perfected. In the past, about half the 1mm thickness of upper and lower glass substrates was reduced using thin glass technology. The new iPad, reportedly, is created with LCD glass ground off by 60 – 70%.

To achieve the new Retina display's improvements, Apple turned to Korean manufacturers such as GD, Avatec, UID and Chemtronics.