The news of late has Android taking over the world and Samsung dominating with Android phones and tablets with more than triple the volume over Apple's iOS. So why is it that Apple's iOS is beating the crap out of Android on the busiest shopping day of the year? – Because more people actually use their iDevices as Tim Cook has been telling Wall Street and their developers for months. Now more proof supports that reality.

Patently Apple wishes our US Fanbase a Happy Thanksgiving 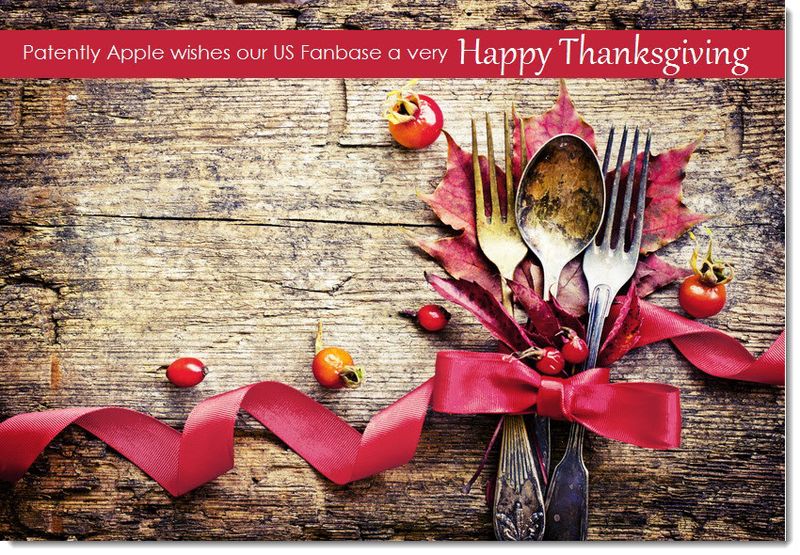 In the blink of an eye another year has gone by and Patently Apple would like to wish our US fanbase a very Happy Thanksgiving. This holiday has always been a time of reflection for me and this year I'm thankful for a speedy recovery after my emergency surgery earlier this month. There are so many things to be thankful for in life, and I hope that you and your loved ones have much to be thankful for this year too. To all of our fans and visitors, Cheers!

Apple has been working on an iWallet or electronic wallet since 2010 if not earlier. They've built quite the body of intellectual property to support their future iWallet which you could view in our iWallet Archives. Today, a new in-depth iWallet patent was published by the US Patent & Trademark Office. Apple's latest invention generally relates to systems and methods for carrying out secure transactions. More specifically, the present technology relates to systems and methods for performing secure transactions using optical codes and optical code readers. 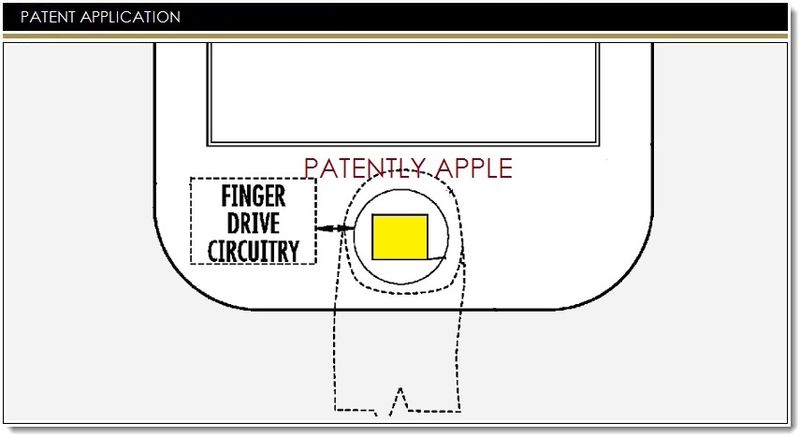 On November 28, 2013, the US Patent & Trademark Office published two patent applications from Apple that reveal more details about the new Touch ID fingerprint scanner that's been incorporated into the Home Button of the iPhone 5S. The patent applications delve into extending the range of electric field based finger sensors so that they could image fingers through significantly thicker dielectric materials such as molded plastic structures. The patents also detail many other technical aspects behind Apple's Touch ID.

Today, DSS Technology Management, a leading developer and integrator of security technologies has filed a patent infringement lawsuit against Apple. The patent infringement lawsuit concerns Apple's Mac Mini and iMac computers that provide wireless Bluetooth connections to a plurality of peripheral devices that infringe on two DSS patents regarding "a data network system in which the server and the peripherals communicate in low duty cycle RF bursts." Report Updated Nov. 28, 2013

Earlier this month we reported that Samsung and Apple would restart to comply with a court-ordered Jan. 8 deadline to find an amicable solution to their patent dispute. Insiders close to the case added that Samsung's mobile chief and CEO Shin Jong-kyun and Apple's Tim Cook will meet soon. Yet now that a Silicon Valley jury ordered Samsung to pay Apple $290 million in damages for copying vital iPhone and iPad features, the mood at Samsung has soured and they're already hinting that nothing will come of their meeting with Apple.

Apple's production of iDevices for the all-important holiday season is cranking up to record highs. Earlier today we reported that iPad mini with Retina orders were getting back on track and were outpacing last year's production of the iPad mini. Now the news only gets better as the iPhone 5S is now flying off production lines at a rate of 500,000 units a day – a historic high for any iPhone model to date.

A new Canalys study published today forecasts that tablets will almost out ship all other PC form factors combined next year, forming almost 50% of the total client PC market (desktops, notebooks, and tablets). The good news is that Canalys acknowleges that Apple is one of the only companies making any money from this boom.

Apple has topped the 'World's Most Valuable List' compiled by 'Forbes' magazine with a brand value of $104.3 billion, nearly double than the other technology major Microsoft which has a brand value of $56.7 billion. Coca-Cola, IBM and Google rounded out the top five brands.

The US Patent and Trademark Office officially published a series of 43 newly granted patents for Apple Inc. today including several multitouch related patents and two relating to business covering "Mobile IP over VPN communication protocol" and "VPN Multi-participant conferences." Yet the one granted patent that stood out most today relates to digital cameras that employ a plenoptic imaging system that will provide a refocusable mode after image capture. While the invention relates to future cameras integrated into iDevices, Apple notes that the technology may also relate to a conventional standalone camera as well. Apple revealed a standalone camera invention back in 2009 and hinted of such again twice this year (one and two).

This was the year that Apple put a lot of energy into developing technology to advance hearing aids in connection to the iPhone. Apple's first patent application surfaced at the US Patent Office in February and their most recent application came to light last month. Their work was obviously more aggressive than first thought. Today we've learned that Apple approached all hearing aid companies to introduce their ideas and technology and a next generation product from Denmark's GN Store Nord is now only months away from being the first to tap into technology that will work with Apple's iPhone.

Apple announced that NTT Docomo was a new partner of theirs during Apple's Special Event for the iPhone in September. After months of hesitancy, a senior official at the mobile phone carrier stated this week in Tokyo that they would begin selling Apple's iPad Air very shortly.

A new Class Action lawsuit has been initiated by Rendell Roman against Apple on behalf of individuals who purchased devices from Apple that use the Lightning connector that is prone to fraying, breakage, failure and beyond. The complaint alleges that Apple possessed knowledge of the defect prior to distributing the Lightning connector.

Continue reading "An Inside View of the NetAirus Technologies vs. Apple Trial" »

Samsung's 'Crisis of Design' Cost them another $290 Million

After failed attempts by Samsung to get a mistrial, the Silicon Valley jury ordered Samsung to pay Apple $290 million in damages for copying vital iPhone and iPad features. In an e-mailed statement, Apple stated that the case "has always been about more than patents and money. It has been about innovation and the hard work that goes into inventing products that people love." Today's verdict is the fifth-largest jury award in the U.S. in 2013.

Continue reading "Samsung's 'Crisis of Design' Cost them another $290 Million" »

Last week we reported on the Galaxy Gear being an epic flop. We reported that Samsung had sold only 50,000 smartwatches. Then Samsung went on a PR offensive the following day screaming that the number was really 800,000. That was quickly doused by a Korean news report that noted that Samsung had "shipped" 800,000 but only sold 50,000. The Verge confirmed that to be a fact. To rub it in their face even further, a new Gartner study published today drives home the reality that "Despite the hype surrounding smartwatches, they are unlikely to be featured on many consumers' holiday wish lists this year." Obviously, other than giving them away when consumers purchase a Samsung washing machine, Samsung's so-called innovation is nowhere to be found. And what do you know; one week later and we get to laugh at Samsung's second flop of 2013: The Galaxy Round.

Texas based patent troll eDekka has filed a patent infringement lawsuit against Apple. The patent infringement lawsuit states that Apple has infringed on claims 1 and 3 of their 1992 patent 6,266,674. More specifically, the company alleges that Apple's infringement involves their website's use of "shopping cart" functionality which is their technology. And like all good patent trolls, they also filed separate lawsuits against Symantec Corporation and Liberty Interactive on the same day.

Hong Kong-based market research firm Counterpoint Research announced late yesterday that Apple's 2013 flagship phone became the world's best-selling smartphone in September, even though it was on the market for just 10 days. Starting on September 20, the iPhone 5s became available in nine countries including the US, and it outsold any other smartphone. The launch of the iPhone 5s made the Samsung Galaxy S4 drop to second place. The next spot was taken by Apple's iPhone 5, followed by the cheaper 5c.

Today a new trademark surfaced at the US Patent and Trademark Office that Apple may want to challenge before it gets approved. The trademark is for a logo noted as "Swiss Apple Inc." which is a company out of Carlsbad California. The application was filed electronically under number 86031606.