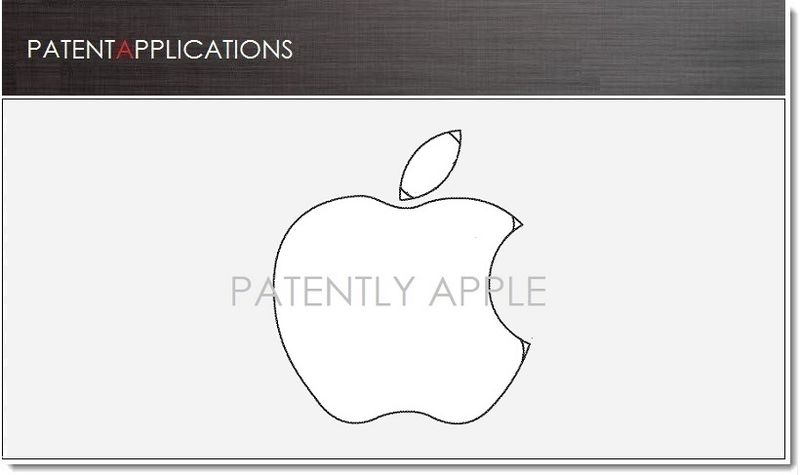 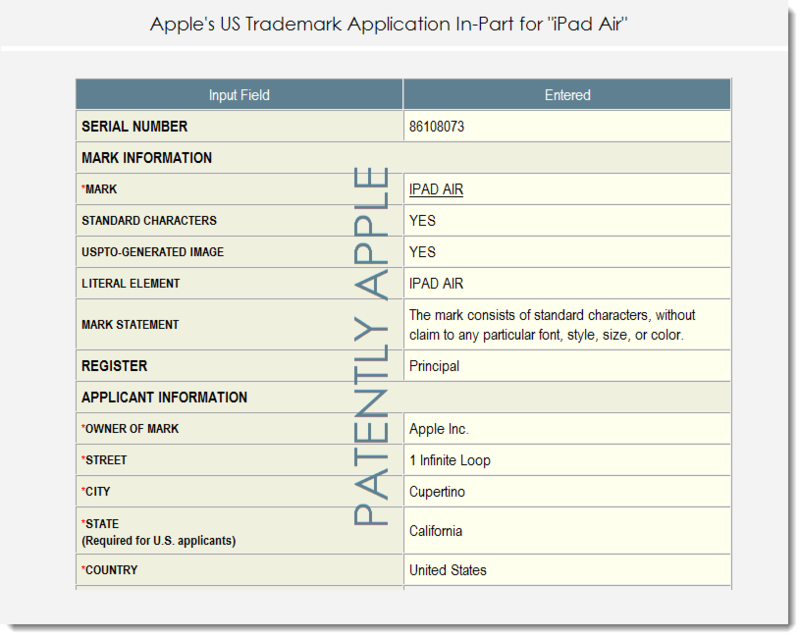 According to US Patent and Trademark Office's documentation, the trademark was filed under International Class 009 which covers "handheld mobile digital electronic device comprising a tablet computer, electronic book and periodical reader, digital audio and video player, camera, electronic personal organizer, personal digital assistant, electronic calendar, and mapping and global positioning system (GPS) device, and capable of providing access to the Internet and sending, receiving, and storing messages and other data."

One of Apple's USPTO Specimens for iPad Air 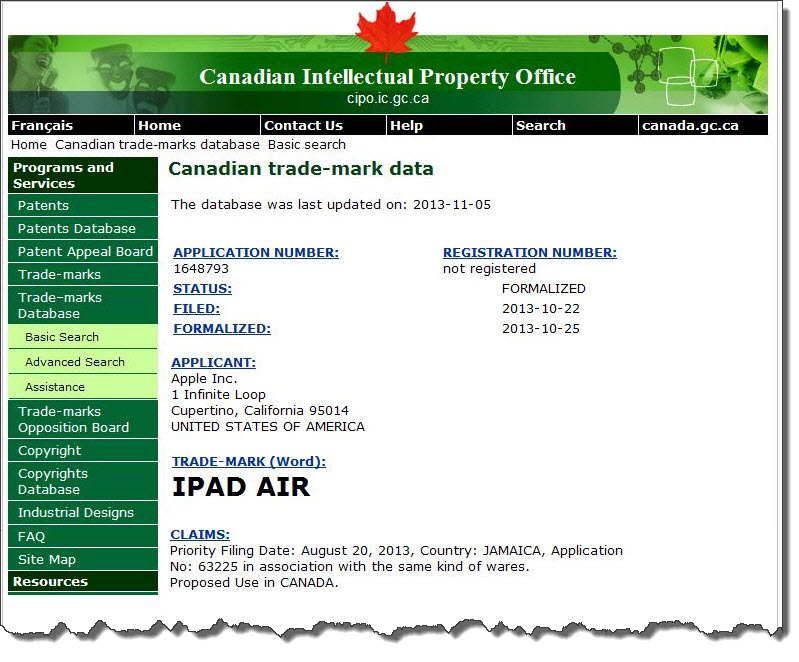 In Canada Apple filed for their "iPad Air" trademark under Wares and Toys. Apple claims that the priority filing was filed in Jamaica on August 20, 2013 under number 63225.

Three patent applications of minor interest were published today by the US Patent and Trademark Office and are noted briefly below:

Apple's patent application reveals some of the techniques that were used to create the apertures in the new iPhone 5C. Apple's iPhone 5C video illustrates the laser precision process for their plastic iPhone casing. Jony Ive stated in the video that the "iPhone 5C is beautifully, unapologetically plastic." Ive went on to describe a whole new structural architecture associated with the iPhone 5C.

In today's patent application, Apple's abstract technically states that "Electronic device housing structures and other structures may be formed from molded plastic. Plastic structures such as injection molding housing structures and other structures may be provided with openings. An opening may have sidewall surfaces. Machining operations and other techniques may be used in forming the openings. Openings may be processed to enhance resistance to stress-induced cracking of the plastic structures along the sidewall surfaces. Cracking resistance may be obtained by activating the surface using heat or laser treatment and by electroplating the activated surface to form a metal liner structure. Surface treatments using applied liquid chemicals or heat may form a treated layer on the surface of an opening with enhanced cracking resistance. A plastic sleeve or other insert may form a liner structure in an opening that resists cracking. Liner structures may also be formed by applying heat or light to a coating in an opening." 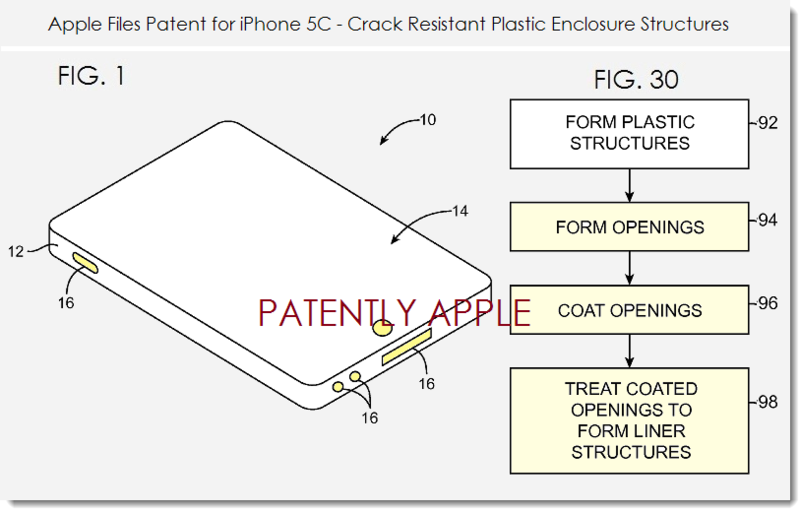 To review the details of this patent application, see number 20130292396 titled "Crack Resistant Plastic Enclosure Structures. Richard Dinh and Daniel Jarvis are credited as the inventors of this patent which was originally filed in September 2012.

A secondary related patent application was published today by USPTO which we briefly cover below.

Apple's patent application relates to a multi-step pattern process for creating the Apple logo onto surfaces noted in Apple's patent claim 12 as being "one of a plastic, glass or metallic material" with a new laser process.

Apple's patent abstract technically states that "One embodiment includes a method for creating a recessed pattern in a substrate. The method includes laser ablating the substrate to form a recessed complex edge geometry in the substrate. The recessed complex edge geometry forms at least a portion of the pattern. The method also includes machining a remainder of the pattern with a mechanical cutter." 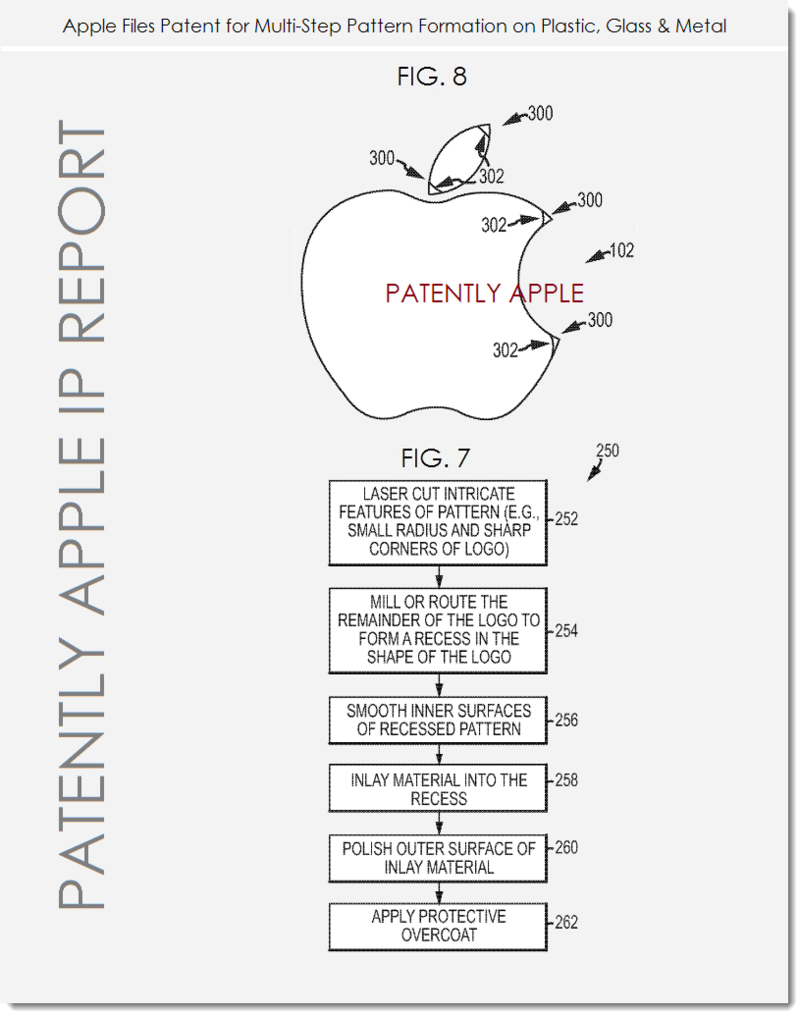 Apple's patent FIG. 7 is a flow chart illustrating a method of creating a complex geometric pattern in an electronic device housing; patent FIG. 8 illustrates laser ablation of only areas of having acute angles.

And lastly, Apple has filed a patent application tilted "Network Access using Short-Range Connectivity." The invention generally relates to personal hotspot processing so as to allow for sharing an internet connection with a secondary iDevice using the new low-power enabled Bluetooth connection protocol, which Apple is calling iBeacon.

The wild speculation cited by other Mac sites today on this patent about it applying to an "iWatch" is just spin. The actual patent application makes absolutely no reference to to any kind of wearable computer whatsoever. While the speculation may even be somewhat logical, the fact is that Apple doesn't make that connection in their patent claims nor in their description of how the invention is to be used. Factually, it's just not there, period.

For more on this see patent application 20130294306 which was originally filed by Daniel Borges, Michael Giles and Michael Larson in March 2013.