Apple has been working on an iWallet or electronic wallet since 2010 if not earlier. They've built quite the body of intellectual property to support their future iWallet which you could view in our iWallet Archives. Today, a new in-depth iWallet patent was published by the US Patent & Trademark Office. Apple's latest invention generally relates to systems and methods for carrying out secure transactions. More specifically, the present technology relates to systems and methods for performing secure transactions using optical codes and optical code readers.

Many payment instruments currently exist and may be used to carry out a financial transaction between two or more parties. For example, payments may be made using cash, credit cards, debit cards, checks, electronic checks, and so forth. In recent years, the growth of electronic commerce may be at least partially attributed to the popularity of credit cards, debit cards, and other hard non-currency based payment instruments. Thus, while merchants generally continue to accept cash and other hard currency as a method of payment for goods and/or services, most merchants now also accept payments made using credit cards, debit cards, stored-value (e.g., pre-paid) cards, checks, and electronic checks. In particular, online merchants (e.g., those operating "virtual stores" on the Internet or World Wide Web) may rely heavily on the use of credit and debit cards.

Mobile devices, such as personal digital assistants and Smartphones, have become increasingly ubiquitous in our society. Indeed, attempts have been made to extend the functionality of these devices to carry out financial transactions. However, these attempts often require either a wired connection with a merchant (e.g., online wallets) or an electro-magnetic coupling with a designated reader (e.g., Bluetooth, Near Field Communication). Unfortunately, these types of mobile payment systems are vulnerable to privacy breaches and cannot interact with traditional paper bills and invoices. Accordingly, it is desirable to extend the benefits of a mobile payment system to situations involving traditional paper bills, invoices, prescriptions, etc. and also to ensure the privacy of the users of these novel systems.

In view of the concerns now recognized and stated above, some embodiments of Apple's patent-pending technology preserve the anonymous aspects of cash transactions while performing electronic transactions by utilizing optical codes that link a client device with a clearinghouse that anonymizes the transaction.

In some embodiments of the present technology, one or more parties to a transaction utilize mobile devices equipped with digital camera and software for decoding optical codes. For example, some embodiments of the present technology involve generating invoices containing Quick Response codes ("QR codes") and decoding the QR codes using a camera and QR recognition software.

Some embodiments of the present technology are particularly useful in scenarios involving multiple customers dividing a single invoice. According to these embodiments, the clearinghouse records individual contribution, provides updated invoices to customers as parts of an invoice are reconciled, and presenting a record of a fully reconciled invoice to the merchant. 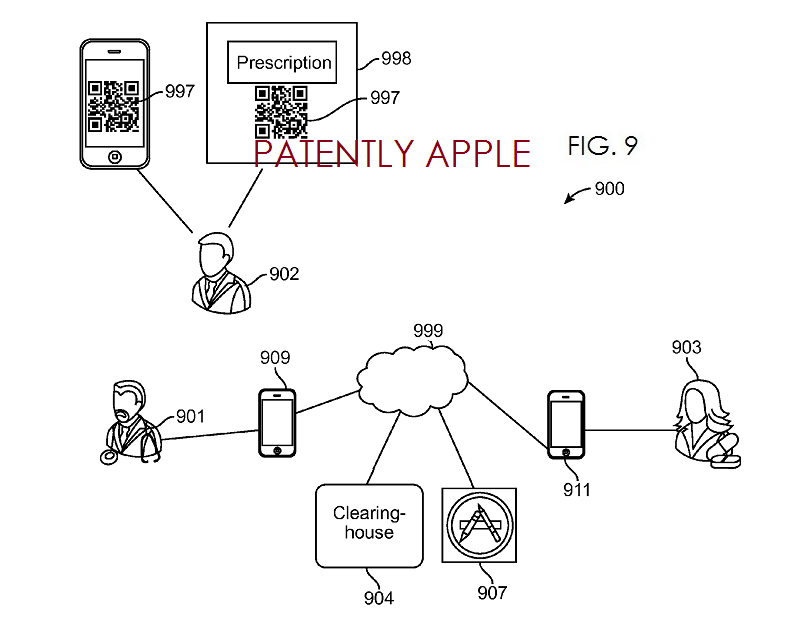 Apple's patent FIG. 1 is a front view of an iPhone with an iWallet related QR Reader App. 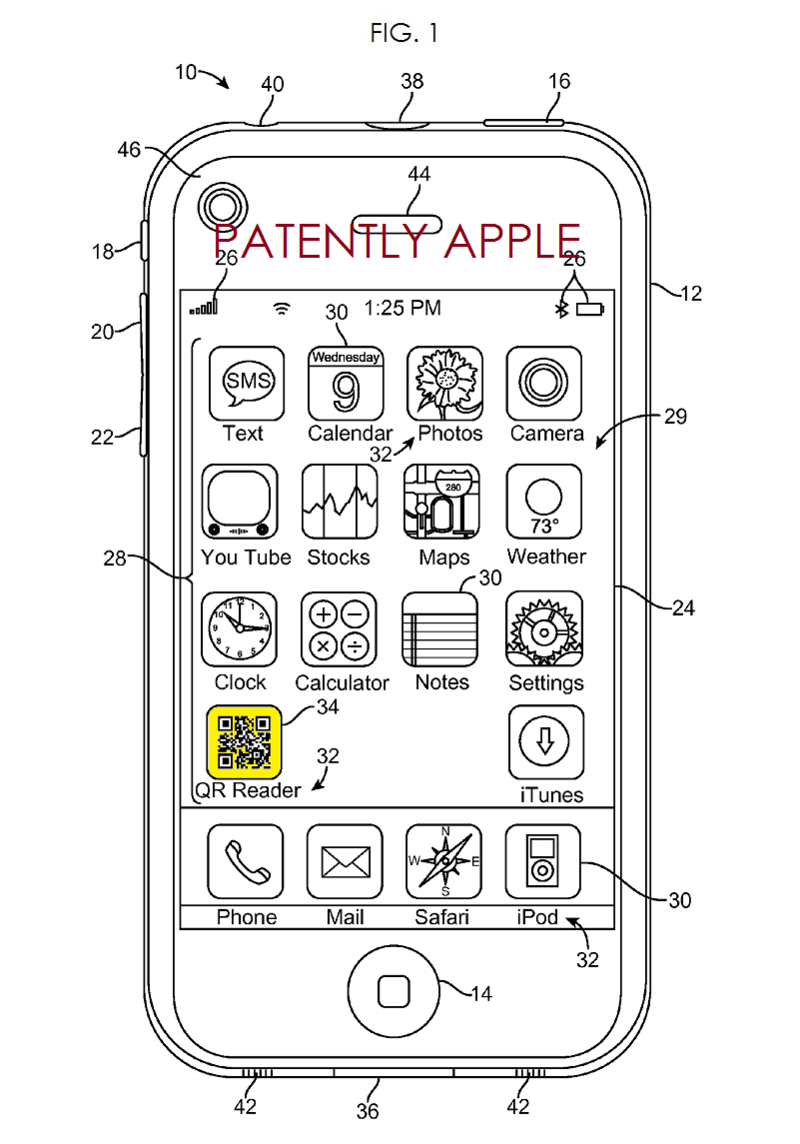 Apple's patent FIG. 2 illustrates a block diagram illustrating various components and features of the iPhone. In particular, the communication preferences associated with the preferences may be further dependent upon security features available for each respective communication interface.

The security features area noted as patent point number 56 below, may be stored in the storage device (#54) and may include one or more cryptographic protocols, such as a secure sockets layer (SSL) protocol or a transport layer security (TLS) protocol, for establishing secure communications between the device and an external device.

The security features may also include a secure access-restricted storage area (e.g., within the storage device 54) to limit access to the sensitive data, such as encryption keys, passcodes and passwords, digital certificates, or the like.

Additionally, in some embodiments, the secure storage area in addition to storing the above-mentioned sensitive data, may be further protected by its own respective password or authorization "personal identification number" (PIN), for example, in order to prevent unauthorized access to the information stored therein. 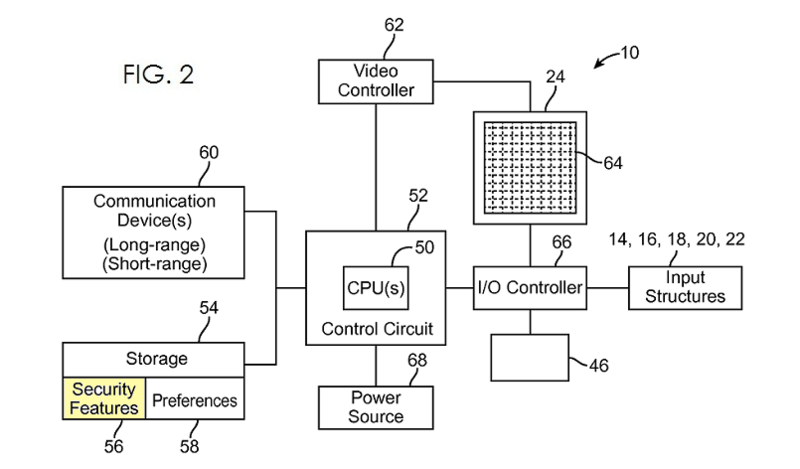 The iPhone with an iTunes Account for Cashless Financial Transactions

Apple's patent FIG. 3 illustrates a system configured for enabling merchants and customers to conduct cash-less financial transactions using a paper bill, a mobile device equipped with a camera, an optical code, and one or more cloud-based clearinghouse according to some embodiments of the present technology.

In some embodiments of the technology, a necessary application resides on network-based application distribution platform (309), such as iTunes or the App Store. Similarly, for a customer to benefit from the merchant's ability to conduct optical payments, the customer also must have a verified account with an optical-based transaction clearinghouse or similar institution and an appropriate application installed on his mobile device. 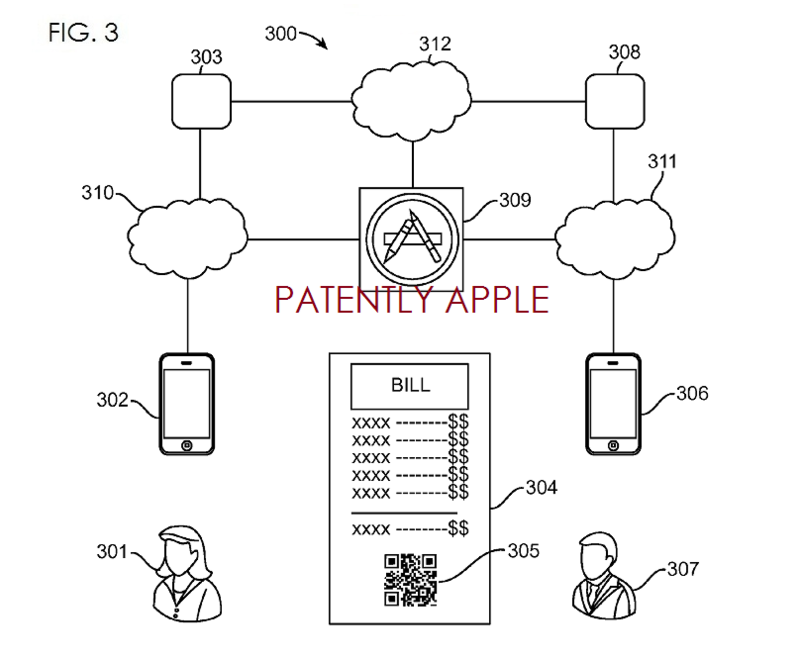 Apple's patent FIG. 4 illustrates a system configured for enabling a plurality of merchants and a plurality of customers to conduct secure, cashless financial transactions. 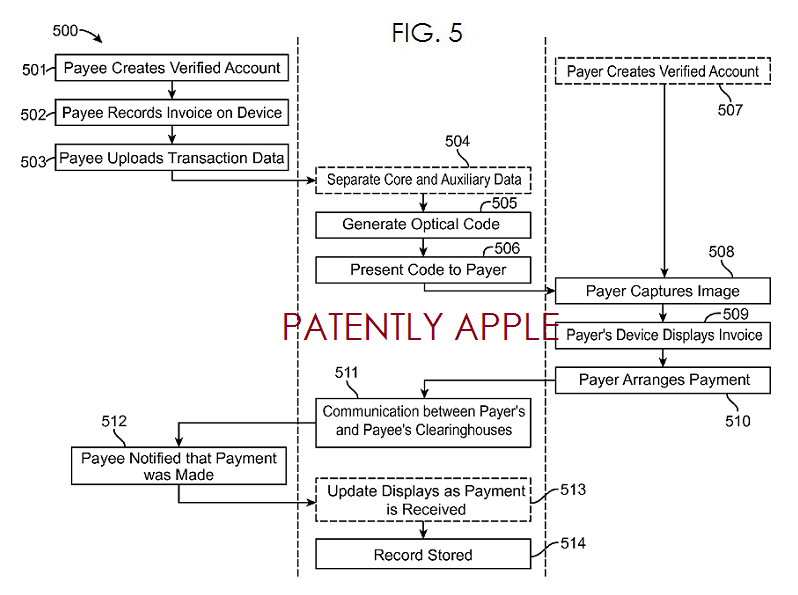 After the payee creates an account, the method continues with the payee memorializing an invoice (502) on a device. The case of merchants, this can include auxiliary data, such as type and quantity of items purchased. In the case of person to person to transactions, this may be as simple as a financial amount and a note concerning the transaction. For example, in a restaurant setting, a waitress can take a table's order and input the items into a wired terminal to memorialize the invoice.

Once the clearinghouse has invoice information and a unique identifier, it generates an optical code (505) that, upon recognition, links a client device to the transaction details. Some embodiments of the present technology involve generating a Quick Response Code (hereinafter referred to as a "QR code") that is readable by a QR code reader application. For example, a code can simply be manually keyed in by a user. Additionally, a barcode could be used. Many other features are discussed regarding methods of payments. 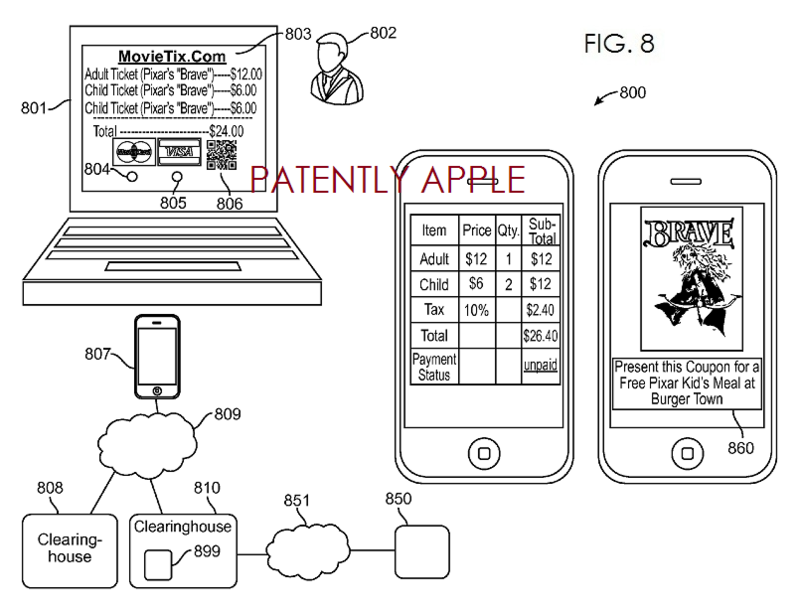 Apple credits Binu Mathew as the sole inventor of patent application 20130317835 which was originally filed in Q2 2012. Apple's patent is packed with extra details and for those wishing to explore it further could find it here.

Google Seeks to Patent a Privacy Display for Mobile Devices