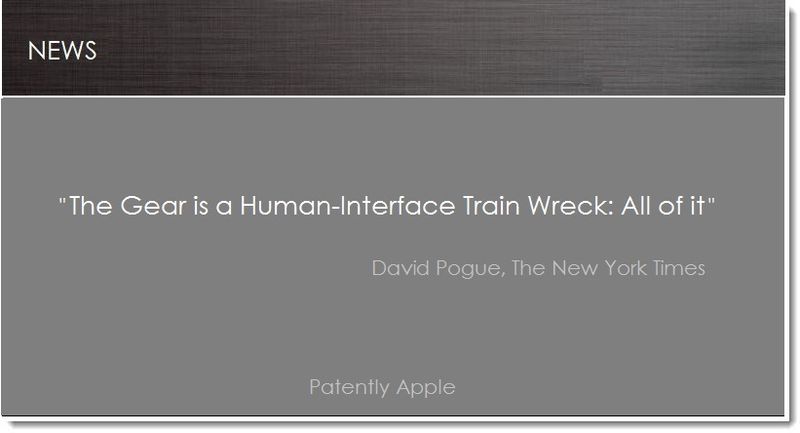 On September 25, well ahead of the pack, we published a report titled "Is Samsung's Smartwatch Sales Headed for Disaster? In that report we noted that a Samsung official had reportedly stated that the new Galaxy Gear lacked something special. We also noted that Samsung was spooked by Apple's wristband computer patent and rushed to get ahead of Apple on this front. We simply saw this as a disastrous move on Samsung's part and we're evidently not alone. The New York Times and the Verge are now on record slamming Samsung's smartwatch called Gear. Is Samsung's Gear headed for a disaster? It sure looks like it at this point in time.


It's being reported by the New York Times that despite having a parade of cool new features bundled up in a single watch, Samsung's Galaxy Gear is seen as a poor choice for consumers.

More specifically, David Pogue stated that "The Gear is a human-interface train wreck: All of it. The software design, user guide, English translations and design consistency." Pogue added that "just throwing a bunch of trees into a pit doesn't make it a log cabin. And Samsung, sooner or later, will learn that it can't build a coherent device just by throwing features at it." The bottom line for Pogue was that "Nobody will buy this watch, and nobody should."

Since its release last month, the highly anticipated gadget has got mixed reviews. While the smartwatch's high resolution photo-taking function and the ability to make and take phone calls were generally well accepted, many took issues with the fact that the watch was not so handy.

Many of its features of the watch require a compatible device, which there are only two as of this point: the Galaxy Note 3 smartphone and Galaxy Note 10.1 tablet.

Vlad Savov at The Verge reported that the Gear has "the utterly infantile dependency" on its connected Galaxy device. For instance, when a user wishes to add a new app to the Gear, he or she must go through installation process via the Gear Manager app on the connected device.

Yet it's Savov's Summary that really nails it: "A smartwatch the Galaxy Gear is not. Frankly, I’m not sure exactly what it’s supposed to be. Samsung describes it as a companion device, and the Gear is indeed chronically dependent on an umbilical link to another Samsung device, but it never left me feeling like it was a helpful companion. The notifications are Orwellian, the media controls are exiguous, and the app selection has no substance to underpin the hype." Ouch!

To step out of Apple's shadow of not only being a leader in smart devices but an innovator, Samsung's first move in introducing an original new product like Gear to show that they're truly an innovator will prove to have blown up in their face – as expected. That's not to say that Samsung won't debut something new of value in the future, but their first big leap in stepping into the limelight as a respected innovator has utterly failed.

Isn't this similar to the Palm Foleo approach which was killed before release? Weaker device communicates to stronger device with a sum of the parts much less than a whole and the customer out twice the money?

"And Samsung, sooner or later, will learn that it can't build a coherent device just by throwing features at it."
I highly doubt that.
It seems to be working out great for the"smart""phone"(should be called dumb tablet)range

I cannot say I am surprised. Trying to beat Apple at their own game before the game has even started by taking an idea that has been attributed to Apple even though Apple had and has said next to nothing about that idea, and going with the Waterfall method will always be a poor approach to designing, "innovating" and being the first to market with something new. If Apple ends up producing a "smart watch" then I hope they take as much time and burn through as many iterations as necessary to deliver yet another gold standard for mobile computing devices. I am in no particular hurry for my possibly inevitable purchase...