IDC Spins a Tale of Android vs. iOS Stats in Smartphones Only

ABI Research reports 438 million handsets and 244 million smartphones shipped during the 3rd quarter of 2013. Samsung retained its lead in handset shipments and grew its share of smartphone shipments to 35%, while Apple share remained flat at 14%. Yet ABI's new report is playing a bit of shell game by narrowly limiting iOS stats to only smartphone's to enhance Android's numbers.


According to IDC, smartphone shipment penetration was 56% in Q3, setting a record high for the third consecutive quarter. Windows Phone achieved 165% growth year-on-year, with Nokia accounting for 95% of that shipment volume 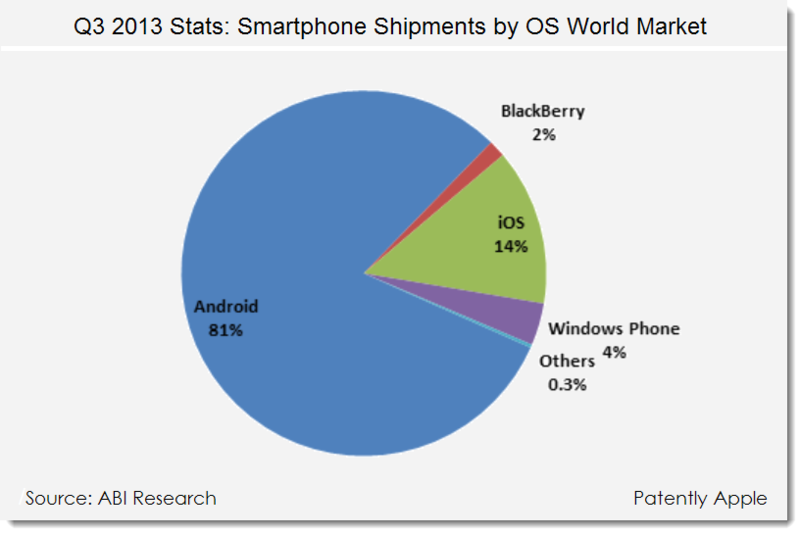 Supported by strong Android shipment growth from Huawei, Lenovo, Xiaomi, and Samsung, Android reached a new high of 80.6% shipment share in Q3. "The race for the third ecosystem is clearly favoring Windows Phone with 4% market share, over BlackBerry's 1.5%, but there remains little opportunity for new market entrants to make a significant impact on Android's dominance," comments senior analyst, Michael Morgan.

Despite a strong showing in late Q3 for Apple's new iPhones, company revenue guidance for Q4 indicates a record 53 million iPhones will ship. "Even with a record Q4 for the iPhone, Apple is only expected to achieve 18.7% market share which is down from the 22.6% Apple achieved in Q4 2012, due to Android's growing dominance and the importance of emerging markets," adds senior practice director, Nick Spencer.

Though on a more positive note, an IDC report published last month forecasted that Apple would grow their smartphone market share with iOS handsomely yet remain in second place for the foreseeable future.

In the bigger picture, ABI's chart is seen to be unfocused in that they should have focused solely on smartphones rather than operating systems. For instance, Apple's iPad is the number one tablet in the industry running iOS with Apple TV adding to that  tally as well. On the flipside, Android isn't doing as well on tablets that are actually being use by humans as measured in stats like these.

Going forward, Apple may have more successful products in the wings such as wearables that might be able to make huge strides in iOS market share very quickly. New Apple products are explosive in nature if they're worth their salt. So the ABI chart is rather narrow, purposely.

For now, ABI is stuck on focusing on Android vs. iOS only where Android is currently the dominating force and forgets stats that matter to developers like iOS being vastly superior for ads. Facebook ads are 1790% more profitable on iOS than Android. How do you fit that into a dead ABI pie chart?

And let's face it, Android is on a lot of junk phones. More than any "stat" could possibly ever provide. Moreover, junk phones help to falsely inflate Android's worth. So let's be honest here. It's evident that ABI's fishbowl thinking is just Android spin at it's finest.

Patently Apple is testing out Disqus as our new commenting system. We would appreciate your feedback on the system. Just leave your feedback below. Thanking you in advance for your cooperation.