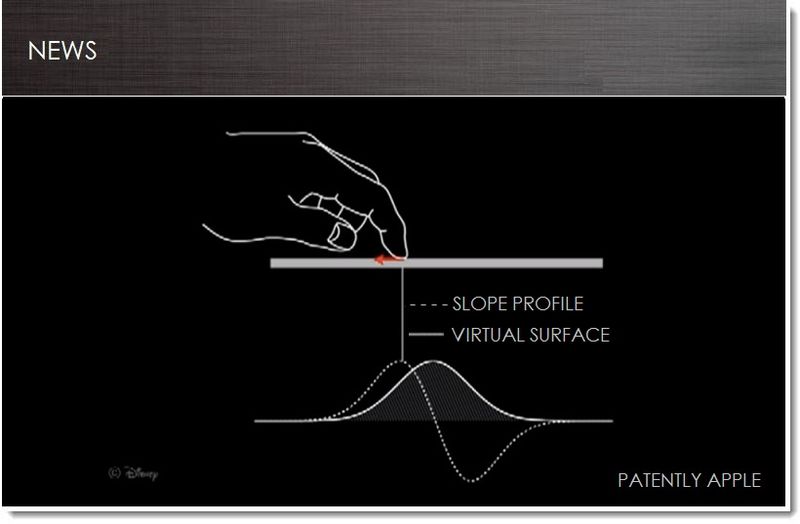 A rumor errupted back in 2010 when a the reputable Japanese publication Nikkei Business Publications posted photos of an alleged iPod touch and iPad being equipped with Senseg haptics. Another rumor had surfaced even earlier on MacRumors. Coincidentally, shortly after the rumor surfaced, an Apple patent application published by USPTO came to light discussing a wildly intelligent multi-tiered haptics system. Apple's latest haptics related patent filing was published in March of this year discussing haptics using magnetically permeable materials. Even Samsung is aiming to bring advanced haptics to smartphones via a floating screen structure that is able to create spot-screen 3D effects. To date there's no major smartphone or tablet on the market that provides consumers with advanced haptics allowing them to experience unique touch sensations on their device touch displays. But a surprise revelation by Disney Research says that they have a solution in hand. Apple has had a close relationship with Disney due to Steve Jobs being the largest shareholder of Disney's due to his sale of Pixar years ago. The first question that comes to mind is: Being that Disney's not a tablet maker, could we see Apple license this technology for use with future iDevices?


In Disney Research's video presented below they state that their "algorithm offers to enhance user interaction with both image and video. It can enhance a variety of spatial information with tactile feedback relating to form and surface topography. For example, users interacting on a touch screen device can receive depth and elevation information when interacting with navigational maps, 3D renderings, as well as projections on interfaced surfaces. 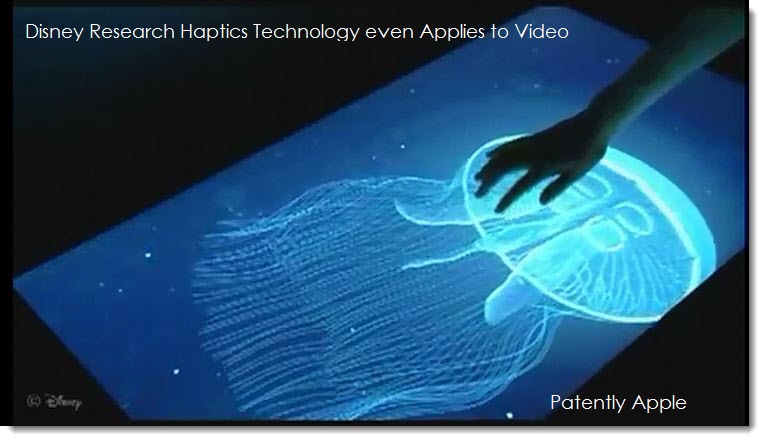 Environmental setting could also be rendered in real-time allowing users access to inaccesible spaces and surfaces and providing information to the visually impared about their immediate surroundings. The alogorithms functionality can be easily incorporated into emerging friction and touch based interfaces allowing for new and engaging tactile user experiences."

Disney's Interaction Group director Ivan Poupyrev further stated that "Touch interaction has become the standard for smartphones, tablets and even desktop computers, so designing algorithms that can convert the visual content into believable tactile sensations has immense potential for enriching the user experience. We believe our algorithm will make it possible to render rich tactile information over visual content and that this will lead to new applications for tactile displays."

While online shopping may be more convenient for most than going to the shopping mall, the fact remains that you can't gauge how materials or products feel before you purchase them. Apple has a few patents on advancing shopping and a virtual closet that may be some of the software candidates for such a new haptics feature along with advancing Apple's Maps and product videos. Imagine touching Apple's new Touch ID button on your iPad and actually feeling the sensation of the grove in the button. The imagination can certainly run wild with the potential of such an application.

Disney is presenting their technology at the ACM Symposium on User Interface Software this week in St. Andrews Scotland.

Whether Apple takes advantage of their own haptic solutions or works with Disney's technology, the race is now on to be the first and best at bringing advanced finger sensory experiences to next generation mobile devices. Between technology from Senseg and Disney, we're bound to find one bold smartphone or tablet maker willing to jump on this feature in 2014. Can Apple be far behind? Time will tell.

I can't believe Samsung came in at 70th+ on Forbes list. Seriously?