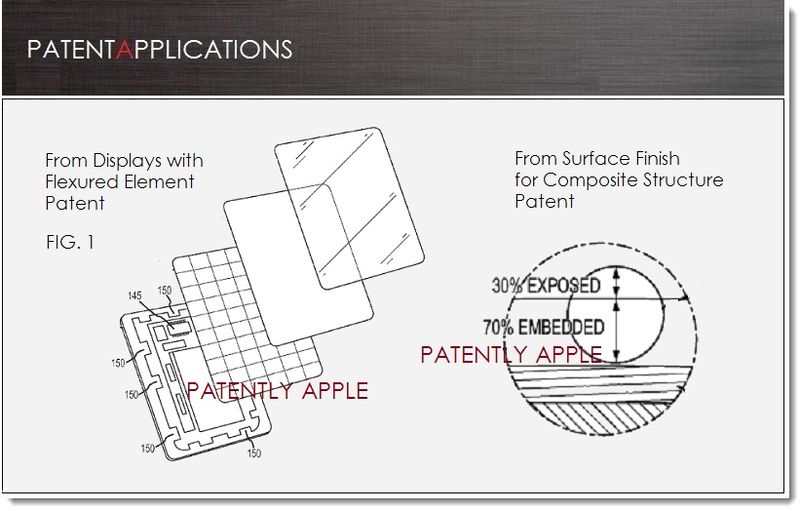 Anyone who loves Apple's products knows that all of Apple and especially Jony Ive and his band of merry men go to extraordinary lengths to design products with precision and attention to detail far beyond your typical technology company. Apple fans around the world always enjoy Jony Ive and his team putting together short videos that showcase various manufacturing processes involved in making insanely beautiful products such as the current iPhone 5C or 5S. We even get a kick out of Ive's meticulous mannerisms and vocabulary for describing new Apple products. This week the US Patent Office published a series of new patent applications from Apple that allow us to dip into Ive's pool of delights. Apple's latest manufacturing process patents allows us to take a peek behind the magic that goes into Apple's cool products. They reveal Apple's fanaticism and attention to unthinkable detail. In Apple's new round of magnificent inventions we see Apple working on new materials, advanced adhesives that you'd never imagine and much, much more. If you're one that appreciates Apple's detail and have a fascination for manufacturing processes, then you're in for a real treat.


Texturing an LED Opening in a Connector Body

Apple's Patent Abstract: the invention relates to connector inserts and receptacles that may have indicators that are easy to manufacture, may have an attractive appearance, reduce reflections, and may provide a consistent indication independent of viewing angle. 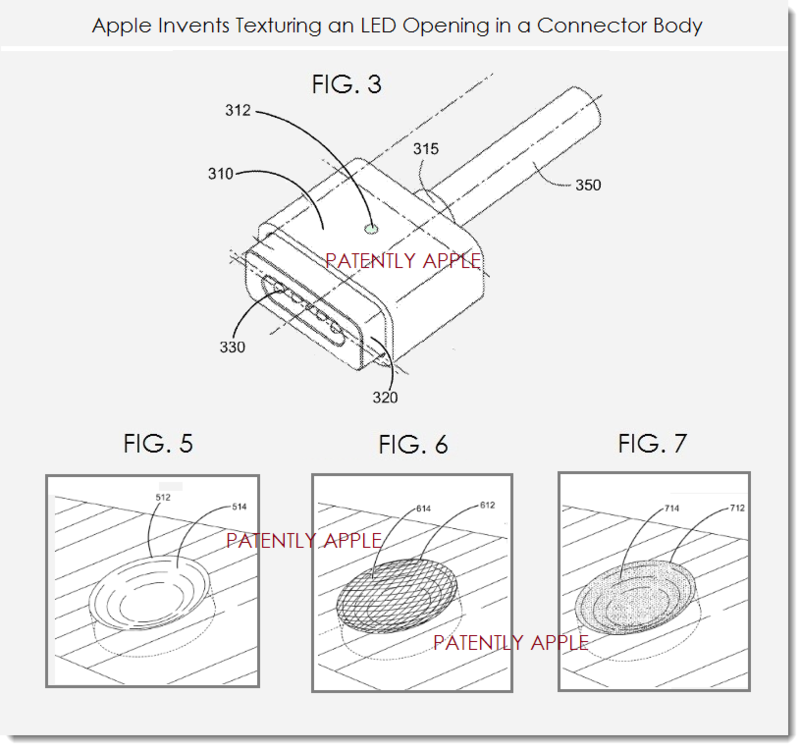 One example may provide a connector insert having an opening to provide light from an LED. The opening may be filled with an adhesive or other material. A surface of the adhesive may be textured, for example by chemical etch, laser, sand or glass bead blasting, through the use of texture tape or other stamp, or in other ways. An entire connector or just the indication itself may be etched. Masking may be used to protect a connector body during texturing.

The invention may apply to Thunderbolt, MagSafe, or DisplayPort connector receptacles and inserts. In other embodiments of the present invention, other types of connector receptacles and inserts may be improved by the incorporation of LED openings. These may include the various USB standards, as well as High-Definition Multimedia Interface (HDMI), Digital Visual Interface (DVI), power, Ethernet, and other types of interfaces and 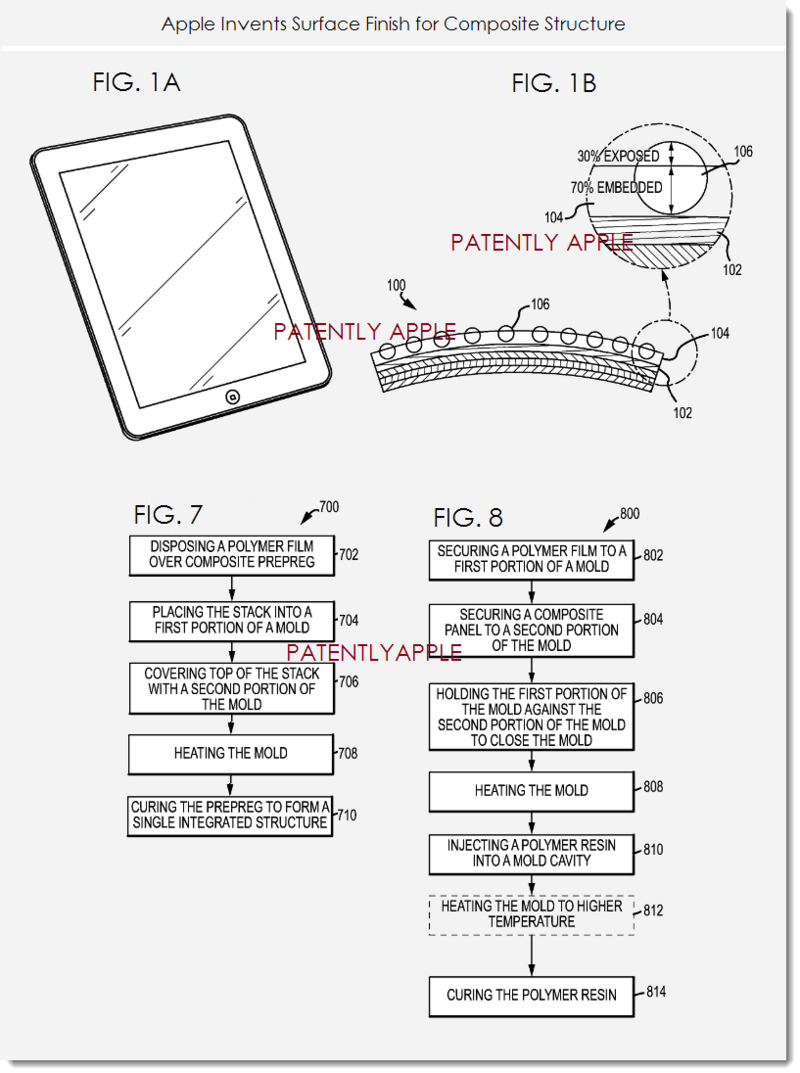 Apple's patent FIG. 1A depicts an iPad having an enclosure formed of a composite material with a surface finish as described in this patent filing. However, Apple notes that the composite material may be used in other devices notably an iPhone, iPod touch, iPod or even a MacBook.

The composite material identified in this current patent filing as "prepreg" was noted in another Apple patent filing in June that we covered under the title of "Apple Invents a New Tablet Cover that may be aimed at iBooks." Apple's initial patent on this kind of composite material was granted in September 2010. We covered that in our report titled "Apple Wins Mystery Patent for Improved Composite Laminate." Apple actually filed for the patent in Q4 2007. So Apple has been working on this for many years.

Apple's patent FIG. 1B illustrates a stack of prepreg with a co-molded polymer film, prior to curing. The stack, noted as patent point #100 in this patent figure, includes a polymer film #104 on top of four layers of prepreg (#102). Each layer of the prepreg may have a different orientation from its adjacent layers to meet the design requirements for strength, stiffness and the like. The stack is cured to form a single structure in a compression mold. It will be appreciated by those in the art that number of layers of prepreg may vary between embodiments. The number of layers of prepreg generally affects the thickness of the finished product.

Apple notes elsewhere in their filing that "the polyurethane coating, in combination with the glass beads, provides excellent resistance to stains, fingerprints, chemicals, scratches, and abrasions for the composite panel."

Apple states that different kinds of adhesives are often useful for bonding to different substrates, or are optimized for specialized purposes. For example, it is difficult to bond to silicone rubber, and as a result, specialized silicone adhesives have been developed.

Unfortunately, however, the specialized silicone adhesives do not adhere well to other substrates. Similarly, while acrylic adhesives bond well to stainless steel, for example, they don't bond well to silicones.

An industry standard revolves around layering the adhesives with a liner in between: silicone adhesive on one side, acrylic adhesive on the other, and a plastic film in between the layers. While an improvement over using only an acrylic or only a silicone adhesive, the multi-layer solution can be suboptimal for several reasons including delamination between layers and especially overall thickness (due to the non-functional plastic film layer).

The reason that any of this talk about customizing adhesives matters is that the reduction in thickness of a composite adhesive layer can beneficially reduce the height of electronic device housing thereby producing a more "pocketable," sleek electronic device – according to Apple.

In general, Apple's patent relates to the field of adhesives. More specifically the described embodiment allows a thin adhesive layer to have additional properties not otherwise available in a homogenous adhesive layer.

Apple's patent FIGS. 10A and 10B illustrate scenarios in which three adhesive types can be useful in forming a composite adhesive layer. 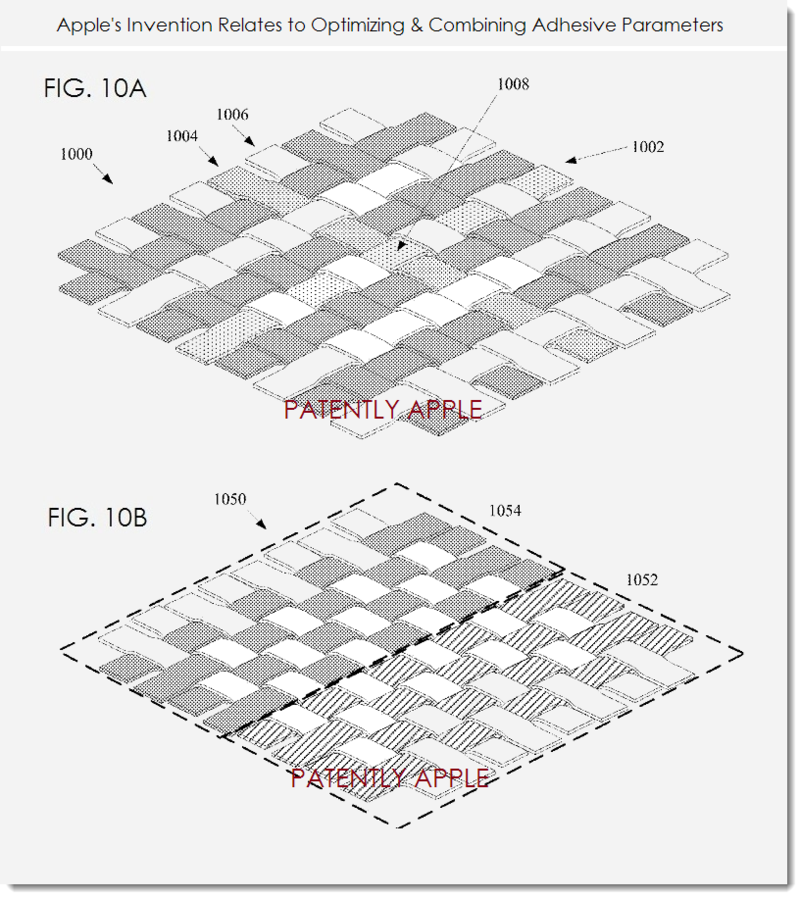 Conduction can be especially effective in the region noted in FIG. 10A as #1008 where adhesive strips 1002 and 1004 overlap and form a conductive pathway extending straight from one surface of the composite adhesive layer to the other. This configuration of the composite adhesive layer can be useful when, for example, a specific portion of an upper or lower substrate layer requires electrical grounding or increased thermal conductivity. Region 1008 can then be arranged underneath that portion of the substrate layer.

Display having a Flexured Element

In many liquid crystal displays, a backlight is used to provide light that may be gated or transmitted by the liquid crystals. In some cases, however, light from the backlight may leak to the front of the display, even when such light is not desired. This may cause visible illumination at the front of the display at undesirable times. Light leakage may distort text, images and the like, or render them visually unappealing. Accordingly, there is a need in the art to reduce or minimize light leakage in many displays. 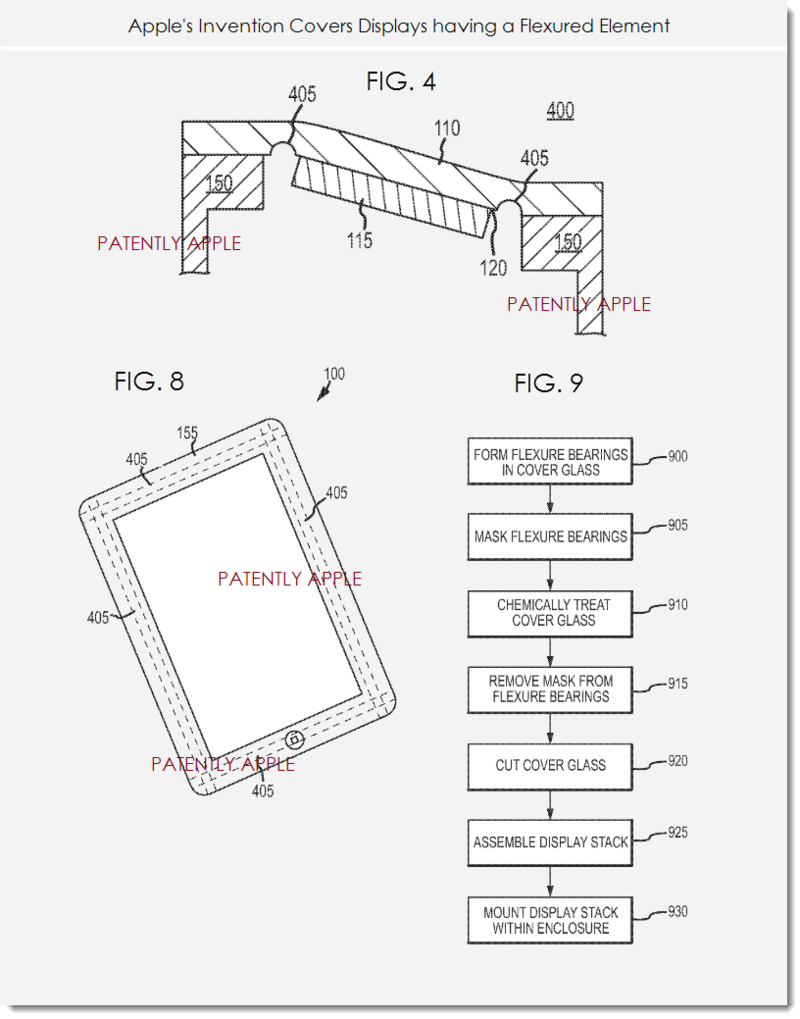 Apple's patent FIG. 8 is a front view of a sample electronic device, showing the relationship between the black mask and the flexure bearings in the cover glass; patent FIG. 9 is a flowchart setting forth sample operations that may be performed as part of a larger process for manufacturing a display for an electronic device.

Between the Apple inventions that we've outlined in this report and the one related to a new manufacturing process for Apple's ultrathin iMac, it's been quite the day for Apple's many teams and engineers who work tirelessly to find new ways to advance products and create new ones for us to enjoy.

I say it a few times a year and I'll say it again today: Cheers to the Crazy Ones in Cupertino.