Apple to Beef Up their iPhone Hearing Aid Compatibility Features 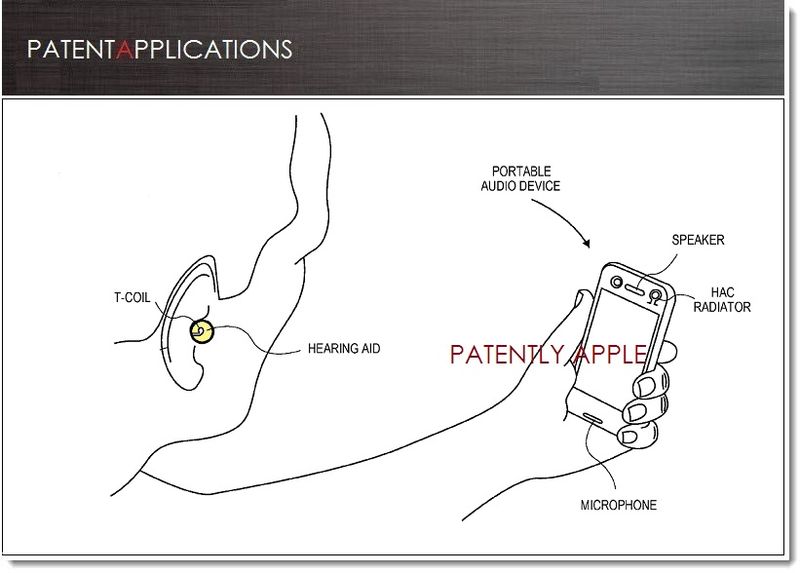 On October 17, 2013, the US Patent & Trademark Office published a patent application from Apple that reveals improved technology coming to future iPhones that will further their support for Hearing Aid Compatibility (HAC) which began with the iPhone 4.

A hearing aid is typically worn by someone who suffers from hearing loss, and can compensate for the hearing impairment by amplifying the local sound field. Hearing aids operate in either a microphone (acoustic) mode or a telecoil (inductive) mode. In the microphone mode, sound waves that are incident upon a microphone which is integrated in the hearing aid are converted an electrical audio signal. In the telecoil mode, an induction coil (also referred to as a telecoil or T-coil) which may also be inside the hearing aid picks up the local magnetic field that has been modulated by the receiver or a dedicated coil of a nearby telephone handset. In both modes, the resultant electrical audio signal that has been picked up is subsequently processed, amplified and then converted to sound (by a small speaker inside the hearing aid) that can be heard by the user.

Hearing aids do not always function well with some portable communication devices such as mobile phones. One problem experienced by those who wear hearing aids and have a mobile phone is that the microphone inside the hearing aid may pick up unwanted ambient acoustic noise from the surrounding background environment, in addition to the desired speech coming from the mobile phone receiver. This makes it difficult for the user to discern the desired speech. However, when the hearing aid is switched to its T-coil mode, the hearing aid microphone may be deactivated, and the T-coil is inductively coupled, via the local magnetic field, to the voice coil of the receiver in the mobile phone. As such, environmental or background acoustic noise is not amplified by the hearing aid, when the T-coil is being used as a pickup.

Hearing aid compatible (HAC) mobile phones are becoming more commonly available to the public. In addition to the typical acoustic receiver, HAC phones may also include a separate magnetic field radiator, such as a loop of wire, also referred to as a telecoil or T-coil, specifically designed for inductively coupling with the T-coil of a nearby hearing aid. Such phones are thus compatible with both the microphone of a hearing aid, as well as its T-coil. These mobile phones may include a switch that enables a user to manually select a HAC mode of operation. In that mode of operation, the audio signal processing that is applied to a desired audio signal is modified to change the frequency response of the audio signal processing chain, so as to better accommodate the microphone of a hearing aid. Another change that may be made when the HAC mode has been selected is to allow the desired audio signal that is being applied to drive the voice coil of the receiver to also drive the telecoil that is inside the mobile phone.

Apple's invention relates to a portable audio device such as an iPhone in which a desired audio signal is combined with an anti-noise signal. An earpiece speaker has a voice coil that is coupled to convert the combined signal into audible form, while producing a by-product magnetic field signal.

Apple's patent FIG. 1 noted below illustrates a hearing impaired user holding an example portable audio device in his hand. The user is wearing a hearing aid, which contains a T-coil. The hearing aid is one that can operate in either acoustic coupling mode in which a built-in microphone (not shown) is used to pick up local sound waves, or inductive coupling mode in which the audio pickup is by way of the local magnetic field waves and the T-coil.

In this particular instance, the portable audio device is an iPhone that also has a microphone integrated into the handset housing to pick up the voice of the user thereby allowing the user to participate in a two-way in real-time telephone or video call with a far-end user over a mobile phone communications network. 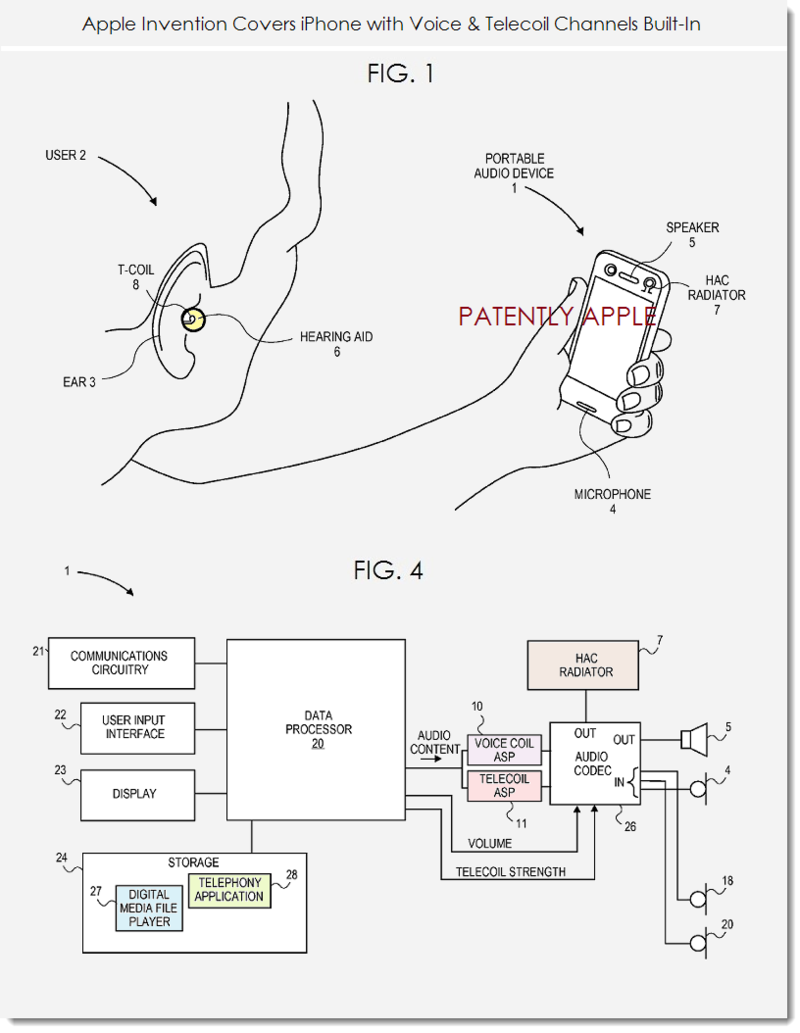 Apple's patent FIG. 4 noted above is an overview of an iPhone which includes a voice coil channel and separately amplified telecoil channel.

Apple credits Dave Ruchir and Chen Shaohai as the inventors of patent application 20130272555 which was originally filed in Q2 2012.

Rick, if hearing aid amplification is not helping you to understand I would look into Cochlear Implants. I lost my hearing progressively over 25 years and the cochlear implant was a life saver. Here is the company website if you want to check them out www.cochlear.com.

I really like this. My mom use to wear hearing aids, but she never really wore them because of all the unwanted noise that she could hear, but didn't want to hear. She was seeing a doctor and got her hearing aids in torontobecause that's where we were at the time.

It's patent pending so it could take awhile. But Apple will make this feature known when it's ready for all countries.

hello people..we know if this mobile phone will come to greece?

Amazing works, I like colourful projects. Thanks for sharing

I have a profound hearing loss in both ears, and even with hearing aids I'm not able to understand speech due to the reverberation (at least that what my audiologist told me). I start hearing sounds at about 50-60 decibels and the sounds at the level are just to distorted to understand.

I used to use a device that's call an Icom, which is a T-coil device that's Bluetooth's to a cell phone; however, it too causes too much distortion. It's made by Phonic and I actually felt like when it was connected that I could hear better through it than just listening through my hearing aids.

I would be more than willing to help provide feedback on new technology :-)