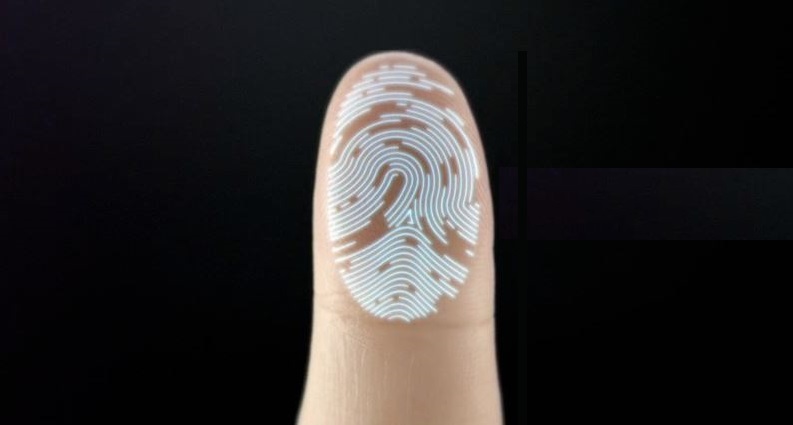 On October 17, 2013, the US Patent & Trademark Office published a patent application from Apple that reveals more details behind Apple's new Touch ID fingerprint scanner. Apple reveals that they added a method to the sensor that would allow it to scan a fingerprint at a much higher resolution than other sensors on the market without electrically shocking the finger. Apple also notes that their Touch ID technology could eventually apply to an iPad, MacBook and beyond. Technically speaking, Apple's patent relates to circuits that may be used to support fingerprint sensing, including boost circuits, such as inductive boost circuits. 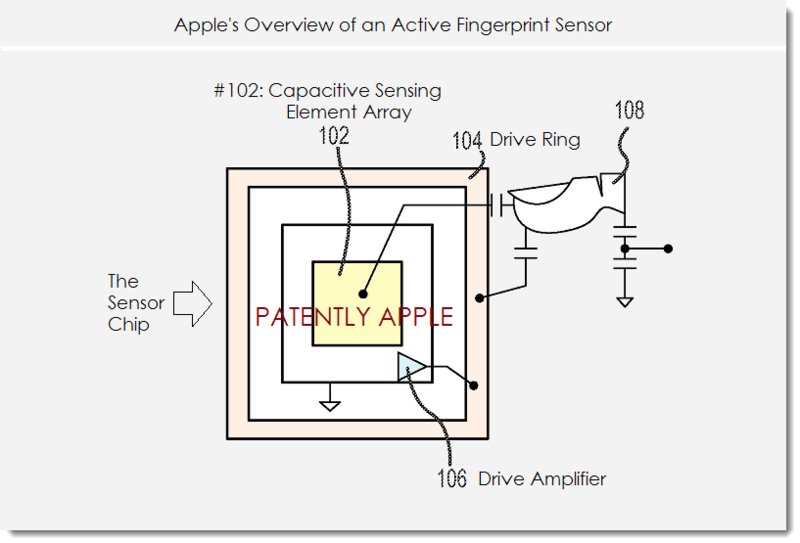 In such a sensor, the voltage that may be applied to the drive ring may be limited. Commonly, the drive ring voltage is no more than 4 volts peak-to-peak. Voltages above this may excite the finger to too high a voltage; this excessive excitation may be detected by a person as a "tingling" or uncomfortable feeling in their finger. Although the exact voltage at which one can sense the tingling varies from person to person, a 4 volt peak-to-peak voltage is generally considered as the threshold beyond which the feeling is noticeable.

Since the drive ring's voltage is restricted to avoid user perception, the thickness of any dielectric overlaying the sensor may also be limited. The thicker the dielectric between sensor pad and finger, the more attenuated the resulting capacitance and the blurrier the fingerprint image becomes. For dielectrics having a thickness or more than approximately 100 microns, the fingerprint image may become unreliable.

Apple's invention may take the form of an electronic device which includes a sensor pad comprising an array of individual capacitive sensing elements; a drive ring connected to the sensor pad; and a modulating circuit adapted to control a modulated signal received by the sensor pad while a drive signal received by the drive ring is maintained substantially at a boosted ground exceeding an electronic device ground level.

Alternately, the capacitance signal may be detected by sensing the change in charge received by the capacitive sensing elements as the relative voltage between the finger and the sensing chip is changed. Portions of the finger further away from the sensor may create a lower capacitance between the sensor and finger, and thus a lower signal on underlying capacitive sensing elements.

Generally, as the dielectric increases in thickness, the capacitance between the finger and sensor grows increasingly attenuated, and so the signal differences may attenuate, as well. Certain embodiments may address this attenuation by applying a higher, less variable, relative voltage change between the finger and the sensor pad, leading to a higher detectable signal at the sensor, as described in more detail herein.

By driving a higher voltage to the sensor, the capacitive coupling between the sensor and finger may compensate for the thickness of the dielectric. By increasing the voltage in this fashion, the capacitance between finger and capacitive sensing elements of the sensor pad may be increased, thereby obtaining better resolution and imaging of the fingerprint.

The sensor may be driven at a higher voltage, such as 12 volts peak-to-peak, 16 volts peak-to-peak, or even more, without inducing any physical sensation in the finger or hand of a user. This may be accomplished by maintaining the drive ring's voltage at a system ground voltage, while the sensor array is modulated with the higher peak-to-peak voltage signal.

By driving a voltage to the sensor relative to system ground, while maintaining the drive ring's voltage at system ground, minimizes the issue of signal attenuation due to the highly variable capacitive coupling between the user and the system ground as a result of other fingers, hands, or body parts coming in contact with other parts of the device. 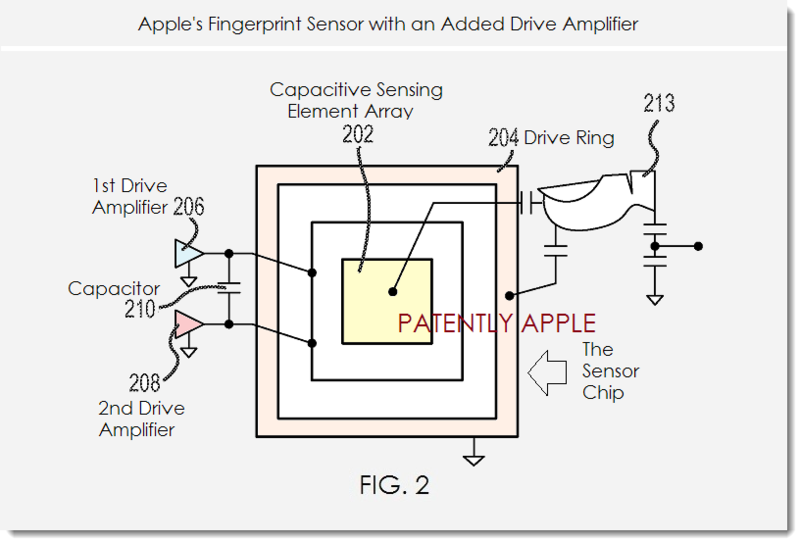 The Home Button Fingerprint Sensor for iDevices & beyond

Apple's patent FIG. 3 depicts an iPhone incorporating a fingerprint sensor, such as that shown in patent FIG. 2. Beyond the iPhone, the electronic device may be a tablet computing device, a notebook computer, a personal digital assistant, a desktop computer, a portable media player, and the like. 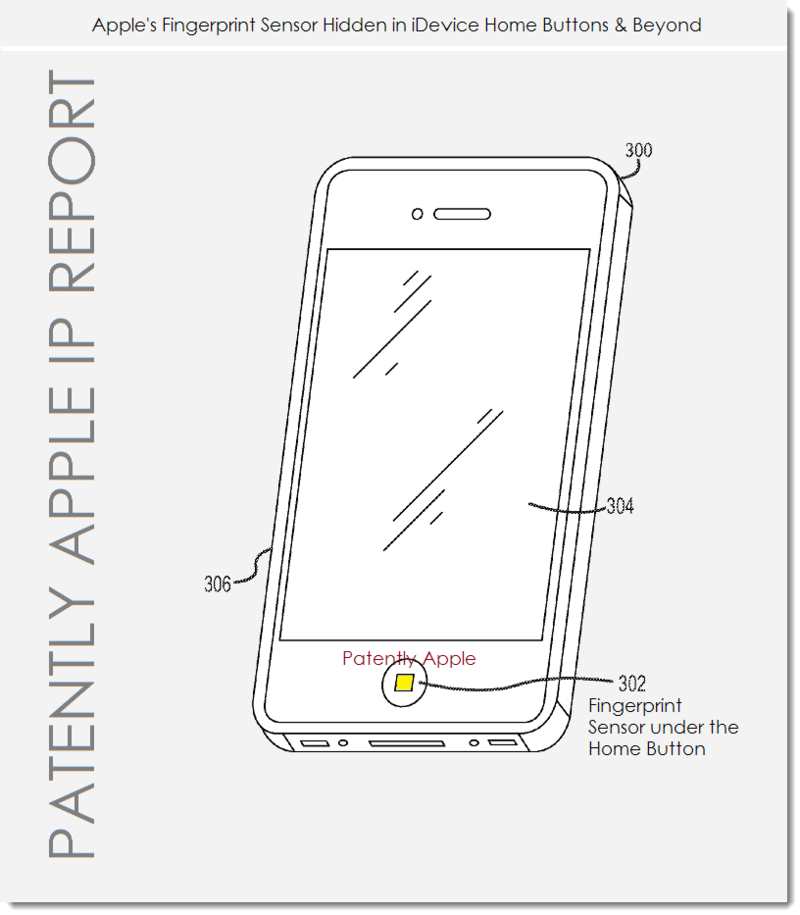 According to Apple, the sensor pad may be placed below an input mechanism, such as the home button #302 as noted in patent FIG. 3 for the iPhone.

In some embodiments, a flex circuit may extend from the input mechanism stack-up and connect the sensor chip to a signal provider chip that may facilitate modulating the voltage and/or operating frequency of the fingerprint sensor chip. We've seen this in the iFixit teardown. 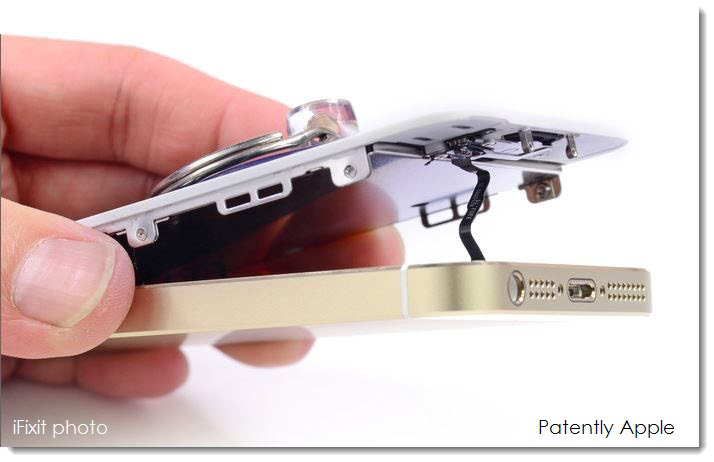 Future Devices may include the Fingerprint Scanner beneath the Display Screen

In the home button, an ink layer and/or adhesive may be placed between the button's bottom surface and the sensor chip's top surface. The adhesive may bond the chip to the button, for example. One or more solder balls may affix the fingerprint sensor chip to a flex conductor. The solder balls may generally be placed near the center of the fingerprint sensor chip to reduce the likelihood of cracking due to stress.

In still other embodiments, the sensors may be placed within or beneath a display stack of an electronic device incorporating a display, such as a mobile phone, tablet computing device, computer display screen, and the like. In such embodiments, the sensor(s) may capacitively sense a fingerprint through the display and/or cover glass of the display.

Apple's patent FIG. 6 is a schematic illustration of a Fingerprint sensing system. 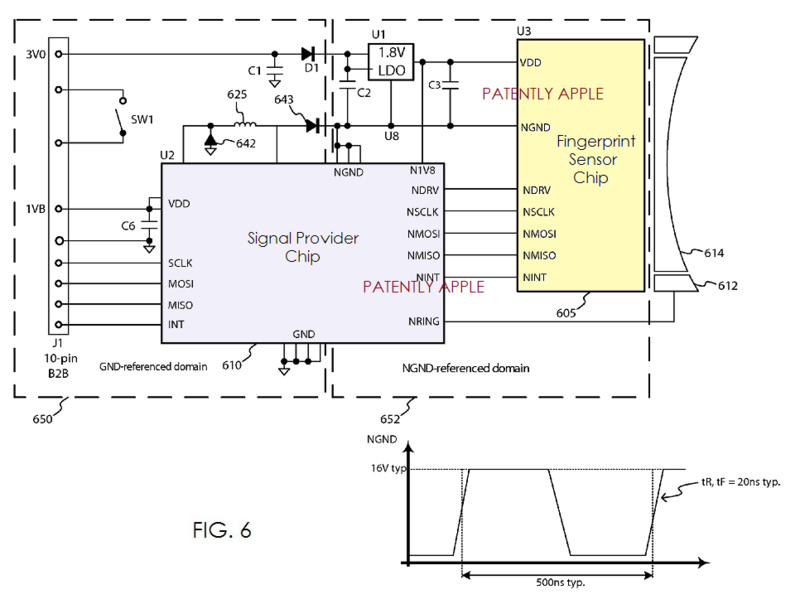 Apple credits Jean-Marie Bussat, Steven Hotelling, and Benjamin Lyon as the inventors of this patent application which was originally filed under serial number 842635 in Q2 2013 or 6 months prior to the debut of the Touch ID feature for the iPhone 5S.

A New Fingerprint Sensor Patent from Apple Surfaces in Europe