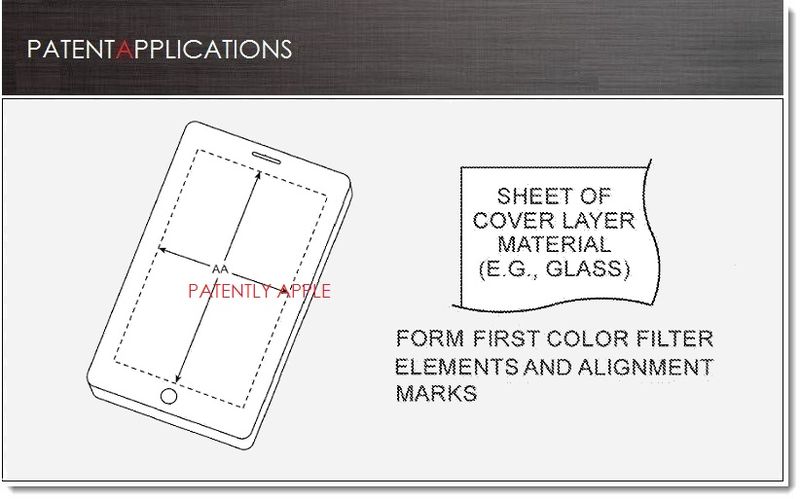 In 2012 AppAdvice asked the question: "Will an Anti-Reflective Screen Ever Come to the iPhone and iPad?" Our September patent report covering Apple's patent application titled "UV Mask with Anti-Reflection Coating and UV Absorption Material," answered that question in respect to Apple working on a solution. The timing of this coming to market, of course, is another matter. This morning, Patently Apple was first to discover another Apple patent application on this very subject matter filed in Europe. This time around, Apple's patent pending invention discusses the manufacturing process and machinery associated with layering coatings unto the surface of device cover glass with such protective materials such as anti-scratch, color filters and most importantly, everything to do with anti-reflection materials for future products such as an iPhone, iPad or wearable computer.

If desired, the display may be provided with layers for reducing fingerprints (e.g., a smudge-resistant coating in a touch-sensitive display), anti-scratch coatings, an antireflection coating, a layer for reducing the impact of static electricity such as an indium tin oxide electrostatic discharge protection layer, or other layers of material.

In one suitable example as shown in FIG. 9, the deposition device which may be a slot coating device having, for example, a squeegee that applies a layer of material of a desired thickness to sheet of glass.

The deposition device may, for example, be used to deposit opaque masking material onto the sheet in a downward direction while the sheet is moving through the equipment through spraying or other means.

Patterning equipment and deposition devices may include optical sensing components such as camera sensors for locating and tracking alignment marks.

Apple's patent was originally filed in Q2 2012 and recently published in Europe. One of the engineers listed on Apple's patent application is Cheng Chen, Sr. Engineering Manager at Apple, (Panel, Process and Optics) who also was listed as an inventor in a patent relating to Apple's Retina Display.