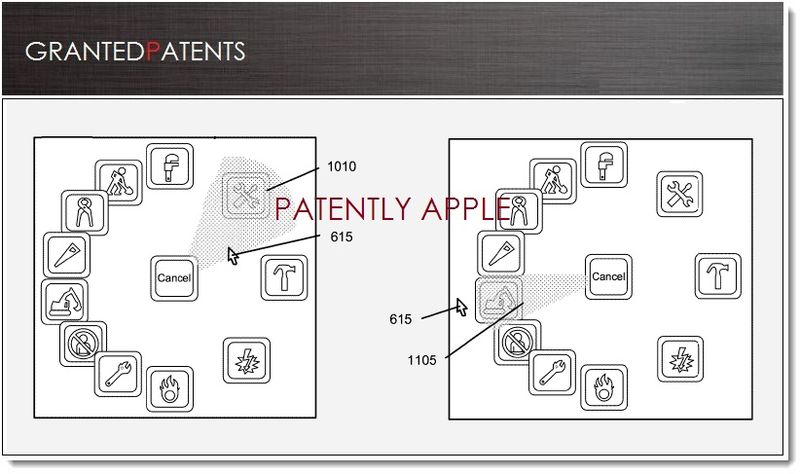 The US Patent and Trademark Office officially published a series of 38 newly granted patents for Apple Inc. today. In this particular report we cover Apple's "radial menus" invention that was designed for both the Mac and iDevices like the iPhone. We also cover Apple's patent regarding a secure protocol for encrypting files that stems from the military and close out our report with a full list of the patents that were granted to Apple today but not covered in our reports.

Apple has been granted a patent today for their invention relating to "Radial Menus." Patently Apple was first to discover Apple's patent Application for radial menus in Korea last year. This patent has now been granted to Apple by the US Patent Office. 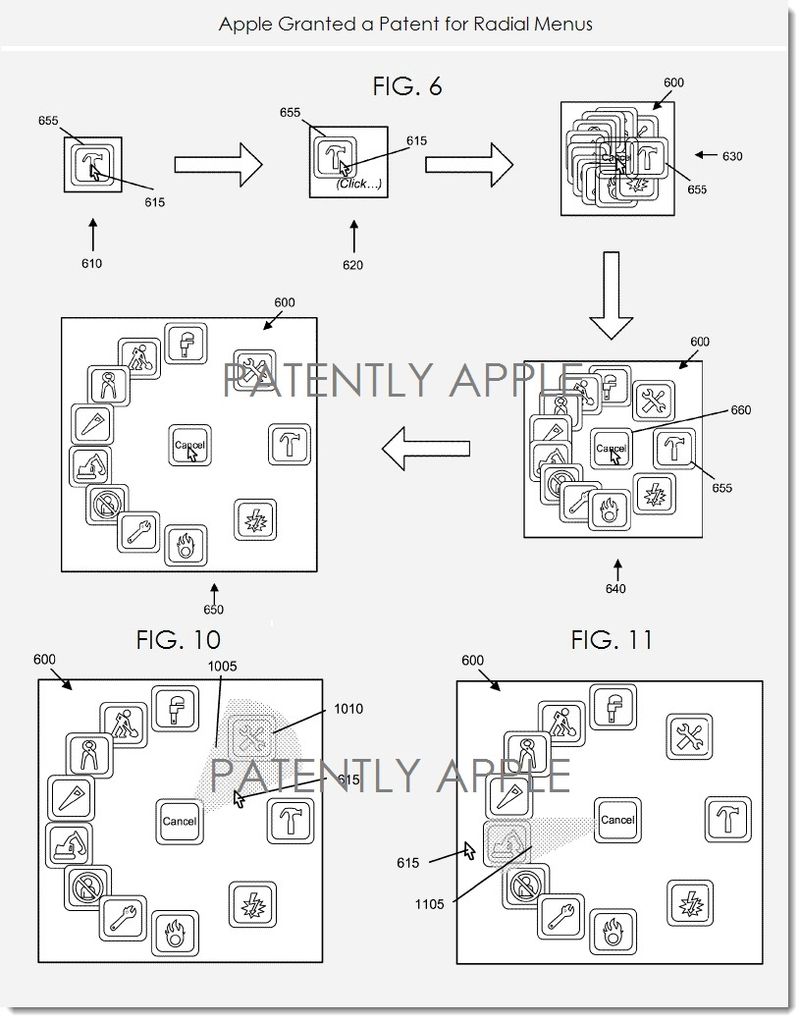 Apple's patent FIG. 6 illustrates the opening and display of a radial menu with selectable items arranged non-uniformly about a central location; FIGS. 10 and 11 illustrate the radial menu of FIG. 6 with a cursor over two different menu items so that the menu items are highlighted.

Samsung introduced a similar radial-styled menu for their new Note 3 earlier last month which they market under "Air Command." Apple's design as noted above could extend to the desktop as well.

Apple credits Peter Warner (Paris) as the sole inventor of this granted patent which was originally filed in Q2 2009 and published today by the US Patent and Trademark Office. Apple's invention is covered by 44 patent claims.

For more details about this patent covering the five stages of the radial menu and more, see our 2012 report titled "Apple Files Patent in Korea for Radial Style Menus." Apple has a number of patent applications relating to various forms of radial menus such as full circle and spirals. Whether this form of menu will make its way to the Mac or future iDevices is unknown at this time.

Apple has been granted a patent today for their invention relating to a new protocol for securing the communication link between the Home Agent and the Mobile Node.

Apple's patent background for this invention is interesting. Apple states that "The Internet, like so many other high tech developments, grew from research originally performed by the United States Department of Defense. In the 1960s, Defense Department officials wanted to connect different types of military computer networks. These different computer networks could not communicate with each other because they used different types of operating systems or networking protocols.

While the Defense Department officials wanted a system that would permit communication between these different computer networks, they realized that a centralized interface system would be vulnerable to missile attack and sabotage. To avoid this vulnerability, the Defense Department required that the interface system be decentralized with no vulnerable failure points.

The Defense Department developed an interface protocol for communication between these different network computers. A few years later, the National Science Foundation (NSF) wanted to connect different types of network computers located at research institutions across the country. The NSF adopted the Defense Department's interface protocol for communication between the research computer networks. Ultimately, this combination of research computer networks would form the foundation of today's Internet.

Apple's granted patent is about a (new) protocol for securing the communication link between the Home Agent and the Mobile Node. Under the invention, a cipher key and an integrity key are generated at a home AAA server and are also generated independently at the Mobile Node. The two keys generated at the home AAA server are distributed back to the Home Agent to use to secure information packets transmitted between the Mobile Node and the Home Agent. The cipher key is used to encrypt the information packets, and the integrity key is used to ensure that the contents of the encrypted message are not altered. 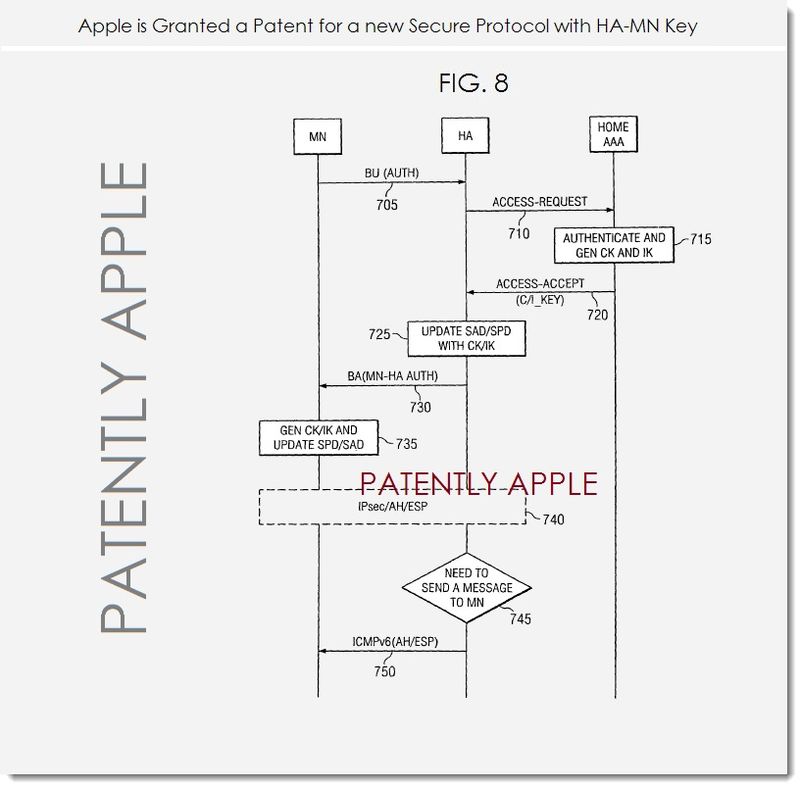 Apple credits Kuntal Chowdhury and Anand Palanigounder as the inventors of this granted patent which was originally filed in Q1 2012 and published today by the US Patent and Trademark Office. The history of the patent goes back to 2004 or 2005 and was invented originally by Canada's Nortel. To review today's granted patent claims and details, see Apple's patent. Whether Apple will implement this protocol is unknown at this time. 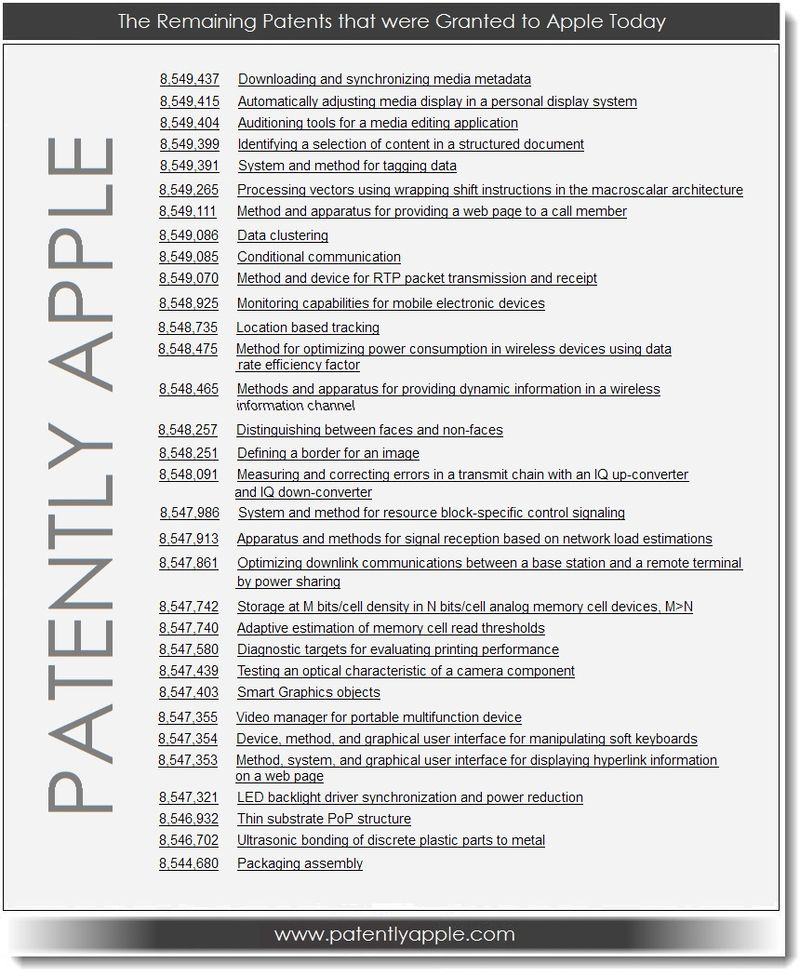 Expect to see this in the next version of Android now that the patent is public.
"Duh, Samsung had this in version blah blah."