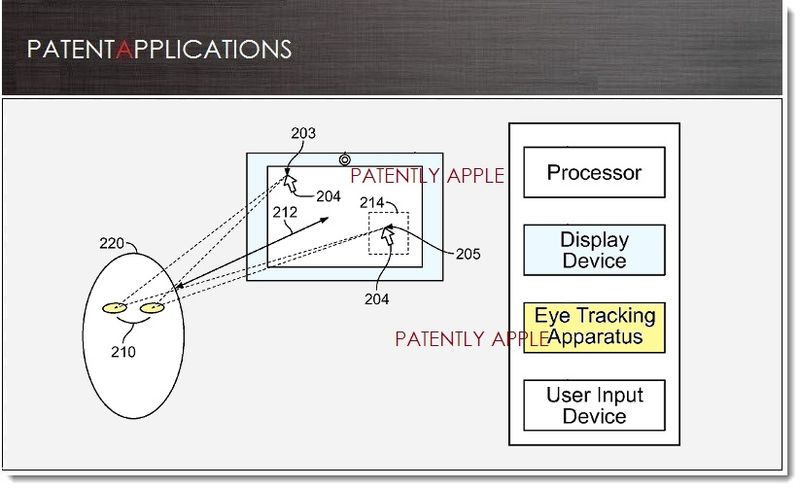 Unlike any other time that I've known, technology companies are now engaged in several races to get new technology to market first and more importantly right. While Apple's Touch ID may not have been the first fingerprint scanner on the market, they definitely got it right and now all of the major smartphone vendors are scrambling to match Apple's success. Other races include indoor location services, advanced haptics, wearable computers, flex displays and the list goes on to include eye tracking and gaze control systems. Sony, Google and Apple are heavily researching this technology and today the US Patent and Trademark Office revealed a new Apple invention covering eye tracking that will apply to all future iDevices, the MacBook and more importantly, for use in your car, in a future gaming console or entertainment system. Controlling a system using advanced eye tracking is tricky and Apple's patent discusses how their system will overcome the number one problem facing eye tracking systems today: Troxler fading.

Troxler fading is a phenomenon of visual perception that the human brain uses to cope with blind spots on the retina, which is the light-sensitive tissue lining of the inner surface of the eye. One result of this phenomenon is that when one fixates on a particular point, objects in one's peripheral vision will fade away and disappear. Another result related to this phenomenon is the perceived fading of a fixated stimulus when its retinal image is made stationary on the retina, which is otherwise known as a stabilized retinal image. This perceived fading causes the stimulus to fade away after a short time and effectively disappear to the viewer (i.e., the person whose retina is capturing and perceiving the fixed stimulus).

The perceptual fading of stabilized retinal images presents a particularly difficult problem with respect to the navigation of a GUI using a movable indicator, such as a cursor, whose position is controlled by eye tracking.

When a user loses track of a cursor within a GUI, systems typically depend on the user to provide manual input to the GUI in order to remind the user of the location of the cursor. However, this is undesirable as it causes the user to become distracted from whatever interaction they are trying to accomplish with the GUI in the first place.

Further, such systems don't take into account when the perceptual fading of the cursor occurs, and how it can be prevented such that the user does not notice or consider the prevention measure to be a nuisance (e.g., by blocking other information within the GUI or becoming a distraction).

Apple's invention in various implementations provides systems, methods, and devices that provide a user of a GUI with one or more measures to counteract a perceptual fading of a cursor with respect to the GUI.

The GUI may exist as part of an interactive operating system environment such as Mac OS X. The cursor or movable indicator may be any object that the user manipulates in order to navigate or interact with the GUI, such as a mouse cursor, bi-directional text cursor, a movable object within a game, or any other object within the GUI.

In certain configurations, the GUI may be presented by and controlled with an eye tracking system. The eye tracking system may allow a user of the GUI to navigate or interact with various elements in the GUI, such as a word processor, game, web browser, or any other suitable interactive application, simply by gazing or looking at a particular point on a display of the GUI.

In certain configurations, the eye tracking system may persistently render the cursor wherever the user looks in the GUI. This rendering of the cursor may be accurate to the degree that the cursor becomes a stabilized retinal image with respect to the user's eyes. As such, the cursor may fade with respect to the user's perception of the GUI. In other words, the cursor may no longer be visible to the user. In such situations, it is desirable to restore the user's perception of the cursor to counteract this fading effect. Accordingly, the eye tracking system described in Apple's patent may automatically alter the position, appearance, or both of the movable indicators so that it is no longer a stabilized retinal image and can be perceived by the user. 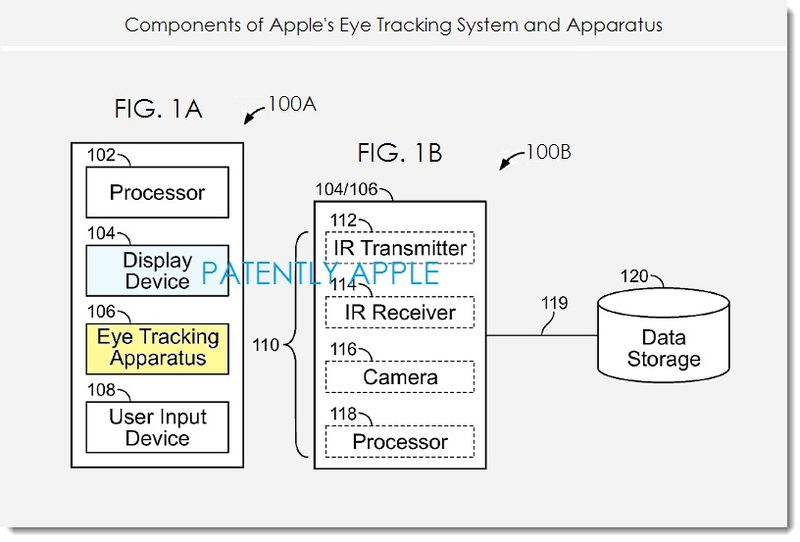 In certain configurations, Apple states that the eye tracking apparatus, noted as #106 of FIG. 1A, may include hardware, such as cameras or infrared transmitters and receivers, which are integrated into the display device itself (#104).

In other configurations, eye tracking apparatus may include hardware that is free standing from display device, such as a headset (see headset) or web camera.

Apple notes that the display device or eye tracking apparatus noted in patent figure 1B-100B may be in communication with data storage (#120) through a data link (#119). The IR transmitter (#112) may include hardware, software, or a combination therefore arranged to generate and transmit infrared or near-infrared signals from display device or eye tracking apparatus towards an object of interest such as a user's face, or more particularly, a user's eyes.

At the top of our report we presented Apple's patent background that pointed to "Troxler fading" as a visual perception phenomenon that when one fixates on a particular point, objects in one's peripheral vision will fade away and disappear. Apple's eye tracking system includes a key countermeasure generator which is seen in patent FIG. 1C under #138 which is designed to counter the Troxler fading phenomenon. 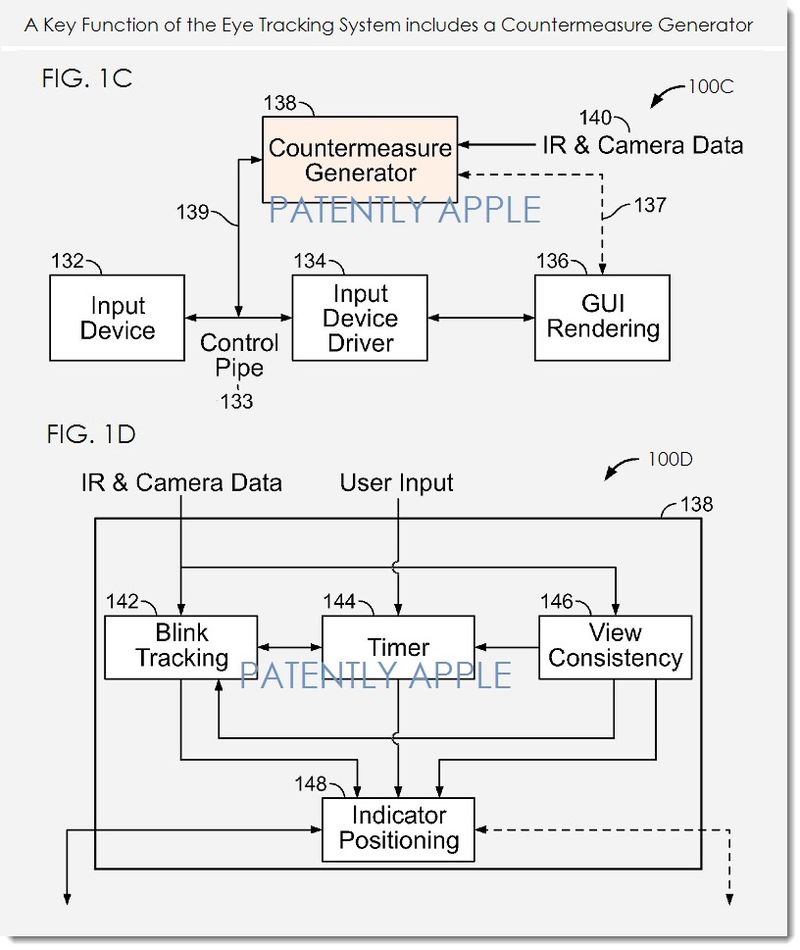 Basically the countermeasure generator receives infrared and camera data as input, determines whether a user's perception of a cursor within a GUI presented by the eye tracking system is subject to fading, and communicates data to the input device driver or GUI rendering module in order to provide a countermeasure (i.e., a counteracting measure) to reduce, prevent, or stop Troxler fading.

Apple's patent FIG. 1D noted above is a diagram 100D of a more detailed view of the countermeasure generator within the computer processing environment 100C of FIG. 1C.

According to Apple, the blink tracking module, noted as # 142 of patent FIG. 1D, may employ one or more computer vision techniques, such as image filtering, edge detection, thresholding, object recognition, or color processing in order to detect the presence or absence of a user's exposed pupils, eyelids, or a pigment of the user's eye in order to detect whether the user's eyes are open and subsequently close. In certain configurations, the blink tracking module may make this determination using infrared images of a user's eyes.

Apple's patent FIG. 2A note below is a diagram of a side view of a user interacting with a GUI presented by Apple's eye tracking system.

Interestingly, beyond devices such as an iPhone, iPad or MacBook Air, Apple specifically adds that the display and imaging components #208 noted in patent FIG. 2B may be integrated within the packaging of other devices or structures such as a vehicle, video game system and entertainment system.

Apple's eye tracking system could complement another of Apple's entertainment or gaming system inventions such as this wild 3D imaging system. 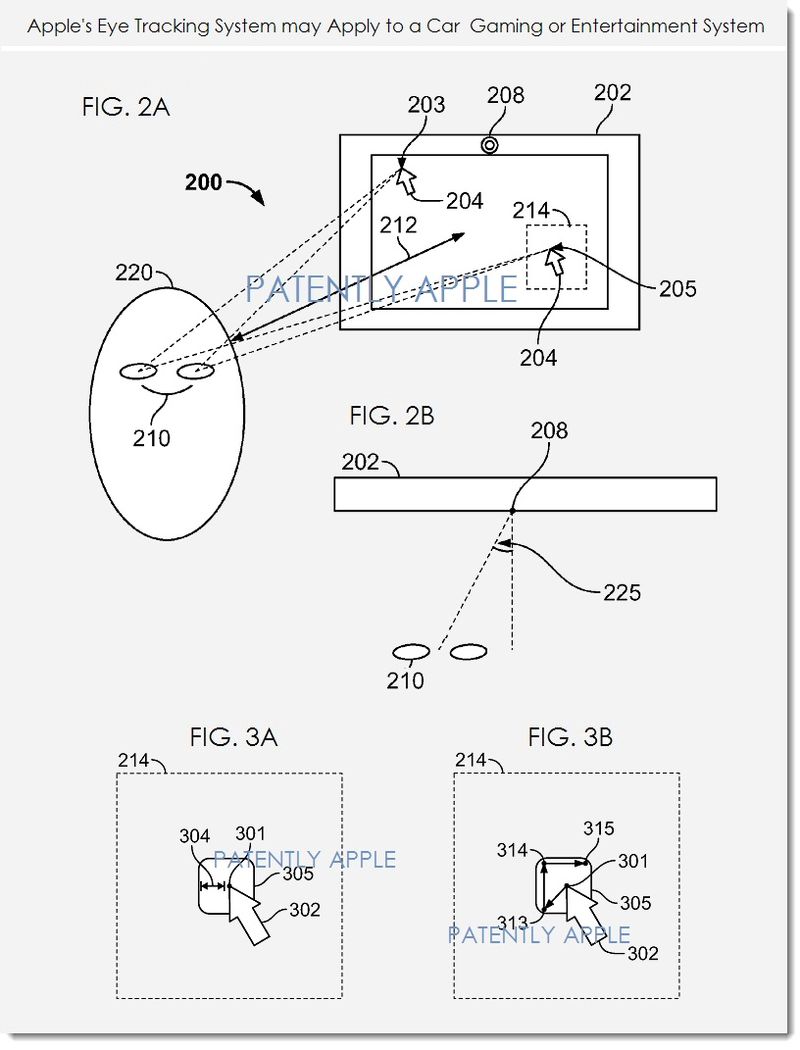 In certain configurations, when the user's point of gaze transitions from a first point of gaze to second point, the cursor glides between the positions in the GUI associated with these points of gaze. 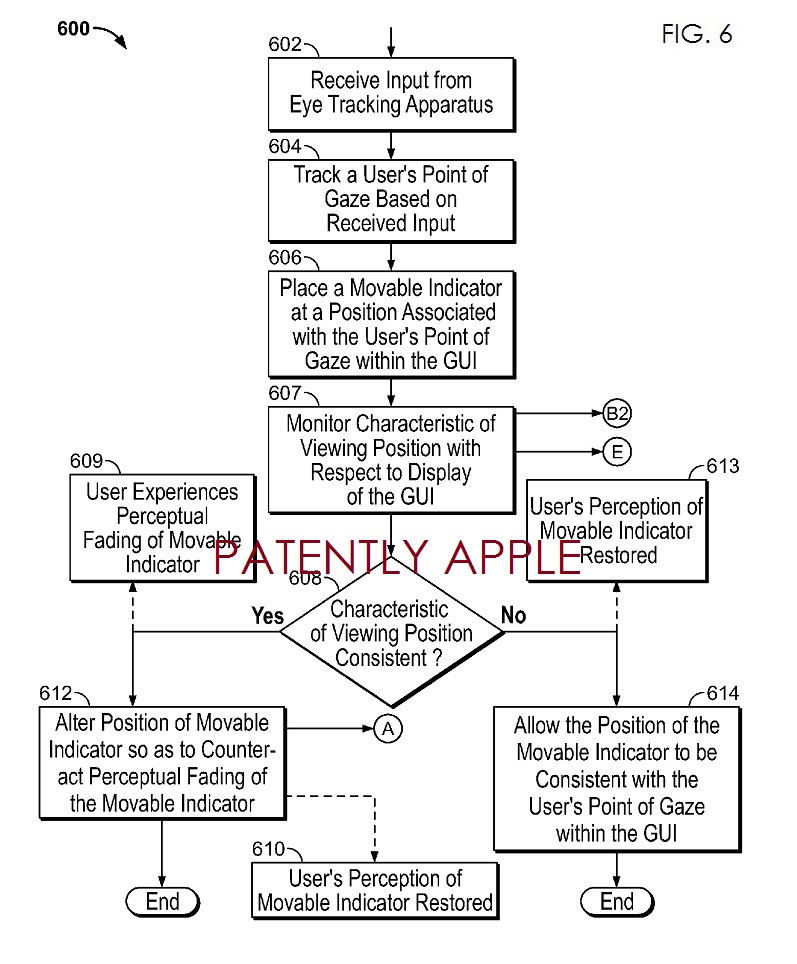 Microsoft was hammered by Six Patent Troll Lawsuits this Week

Consumer tech companies are going crazy about eye tracking or what? I mean the new patent for 'pay-per-gaze' business model by Google?!?
Read recently the much rumored Amazon phone is going to have 4-camera-3D-eye tracking...

Can't wait to try some kick ass applications. Have German friends at myGaze, they tell me developers are rushing in to buy their SDKs to build applications, guess that's a closing window to make loads of Benjamines early...