Samsung Fails to Deliver a Fingerprint Scanner for the Note 3

If Apple delivers the iPhone 5S with a fingerprint scanner next week, then they'll have beaten Samsung to the punch. With the Samsung IFA event concluded, they failed to deliver this new feature that was highly anticipated. It appears that Apple could very well end up being the first top tier smartphone player to deliver this next generation biometric security feature. With Samsung missing out on a fingerprint scanning feature, you have to wonder if Apple will still be able to deliver this feature on cue next week. You have to admit, it sure ups the ante for next week's iPhone event.

Although I watched the Samsung event from Germany, I didn't take notes to many of the specifics. However, below are a few slides from the event for those who are interested. 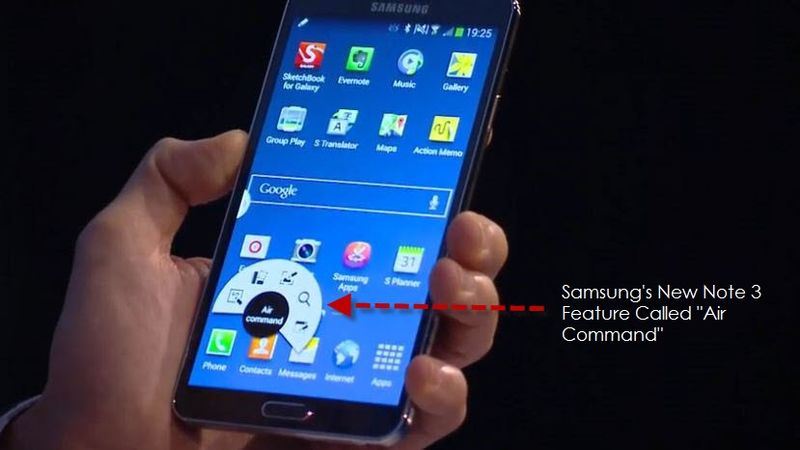 The slide above covers a new Samsung Note 3 UI feature called "Air Command." Two points for Samsung with this feature, though it's primarily used with their new S-Pen. Both of these features (Air Command + S-Pen) were first captured by our Patent Bolt site last week in patent form.

This type of feature is definitely one that I'd like to see on an iDevice. In fact, for those of you who follow Patently Apple, you know that Apple has three or more patent (one, two, three and more importantly four) filings on this very user interface concept.

In 2009, Patently Apple posted a special report titled "Apple Mages Working on Augmented Reality Magic." It was in this report that we covered a wearable computer known as "The SixthSense," developed by Pranav Mistry, a then PhD student in the Fluid Interfaces Group at MIT's Media Lab. At that time we stated that "Science fiction is sometimes the inspiration behind motivating entrepreneurs to invent great things that the public are already comfortable with. For example, the race is on for a miniature video iPhone that resembles that of a Dick Tracy watch."

The following photos illustrate some of Gear's features that Pranav briefly touched on during his keynote. 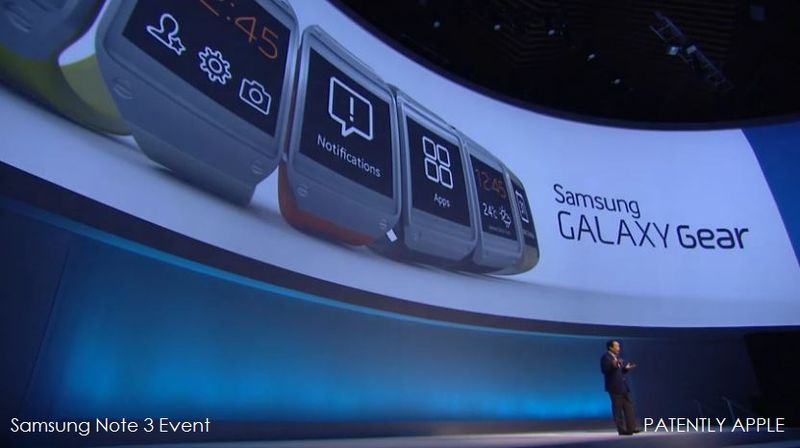 By placing the watch/Gear up to your ear you could make a brief call without having to use the Note 3 which powers the Gear watch.

Gear has a built in camera on the side of the device so that consumers will be able to take quick photos in a split second as action is happening. Yet it must be said that the camera is really a huge ugly design distraction as you can see in one of the other photos below.

While there were a few interesting surprises at the Samsung event, it was still the lack of a fingerprint scanner that stood out for me considering the amount of hype surrounding this feature.

Beyond that point, the new Air Command was interesting, though I'd love to see when they filed for a patent for this just to verify that it was their idea and not one quickly copied from an Apple patent filing. Samsung's Gear had some thinking behind it, considering that Pranav Mistry was behind it. Yet, there was nothing there that is likely to compel many to actually buy it. It's bulky and delivers little to nothing in real value. I'm sure that Samsung thinks that this is a "breakthrough" product, but it's just a super-charged wrist watch that's ugly. But hey, I'm sure Androiders will eat it up like a dog on a bone.

At the end of the day, I think that Samsung moved the innovation needle up 0.1% and that's actually a start for this copycat designer. If someone can point me to an USPTO patent filing from Samsung predating Apple's radial user interface filing, I'd gladly up that innovation needle up a notch. But I'm not sure that anyone will be able do that. Are there any Android takers out there? I'm waiting.

If you have an opinion on Samsung's new Gear watch or want to weigh in on whether Apple will deliver a new fingerprint scanner for the iPhone 5S next week, then send in your comments below.

I made comment on that below, but since you missed it, I'll repeat it.

Typically, Android OEMs dump technology into a device without much thought just to add a "new" feature. Without matching software to give a component feature some purpose, what is it good for?

Apple has been working on a real iWallet, and working with the credit card companies and banks, the fingerprint scanner is a way to secure ID. Of course the Samsung wallet didn't have that, so you don't get that use of a fingerprint scanner.

Apple may or may not introduce the iWallet next week, but having it integrated now will ensure that iPhone users starting with the iPhone 5S will be able to take advantage of the iWallet security feature in the future.

Yet considering that ISIS and other groups will kick start e-Commerce using NFC and Apple technology this fall, Apple may very well surprise us with that new application.

The fact that you, an Androider, don't get why Apple will use a fingerprint scanner is really funny.

Why would i want a finger print scanner? does that make my phone faster. run smoother.does it make my 4g any faster does i make my pics look richer? NO. Really there must be something other than a finger scanner thats going to change up things which I had a android moto with a finger scanner and I never used it I think only old people want something like that to give them a sence of extra security.

Martin, what company preannounces features? None. But they play the game by planting stories in their respective communities. Look at the many elaborate headlines found in a Google search below:

There were dozens of reports from top Android sites for months. So yes, this makes it a "new feature that was highly anticipated." Did I say Samsung made a statement? No.

Highly anticipated ? By who ?

Also, I didn't saw any statment by Samsung that they will to add finger scenner to Note. So why they fail?

Hate speech? Are you that thin skinned?

As an Apple site I covered the Samsung event fairly. I pointed to Pranav Mistry respectfully and believe he can bring some real zip to Samsung. I covered two of Samsung patents respectfully.

Taking a dig at Samsung for being a copier is justified in my view. They were found guilty of patent infringement and they copy Apple as much as they can. Are you kidding me?

But you missed the point, like most Androiders. Your own Android press built up the fingerprint scanner as one that was going debut ahead of Apple. It didn't pan out. So whine all you want.

As for the feature being silly. It's only been silly because, like all Android OEM's, they add features like NFC and Fingerprint scanners without meaningful software to support it. That makes Android OEMs thoughtless. So don't blame the technology. They're blindly throwing anything at the market without a cohesive vision. That's what's silly.

Why the hate speech?

Fingerprint readers exist in phones for a really long time and it's mostly a silly feature. And Samsung is the one moving the innovation needle 0.1%... Really?

What's up with Samsung? They need to get with the program. People have been waiting for a fingerprint scanner for a long time.

We love our android phones but they forgot the people. Maybe we need to buy an iPhone to remind them that we're the ones that helped them make billions. Sergio/NYC.9/4/2013